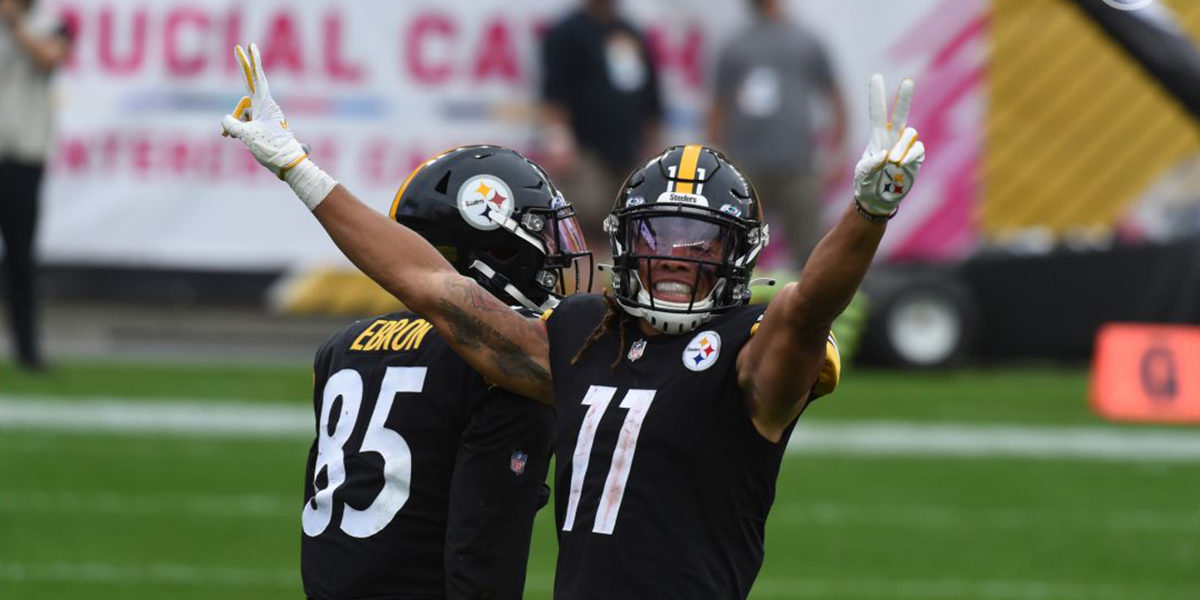 Following the debacle that wasn’t a bye week for the Steelers, the team prepared to host their, as some may say, in-state “rivals”, the Philadelphia Eagles. It would also be the first, and one of the few times that fans were permitted to attend a game at Heinz Field during the 2020 season.

The Week 5 matchup started with a slow first quarter that escalated quickly at the end. Steelers rookie WR Chase Claypool would run a two-yard score in as Pittsburgh struck first blood at the 1:04 mark in the first quarter. However, the Eagles would soon answer, as RB Miles Sanders scampered 74 yards to even the odds with seven ticks left in the quarter.

Claypool would get payback on the next drive, the second of five-straight Steelers scoring possessions – this one, a 32-yard pass from Ben Roethlisberger as the Steelers went up 14-7, only to see Sanders break the plane of the endzone again on a ten-play, 76-yard drive that would se ethe game tied at 14-all.

The Steelers weren’t done yet, as they took a deciding 17-14 lead off of a 41-yard Chris Boswell field goal: those points would prove to be the go-ahead the Steelers would need, never looking back as both opponents entered their locker rooms at the half.

The third quarter would open with another Steelers touchdown drive, this one resulting in 75-yards over six plays as Claypool became the beneficiary of yet another Roethlisberger pass – this time a short five-yard lob to put Pittsburgh up 24-14.

The Steelers defense got in on the action, picking off Carson Wentz and setting up a James Conner one-yard run at the 10:32 mark in the third to put Pittsburgh decidedly ahead 31-14.

Yet, the Eagles wouldn’t go away, scoring on their next two possessions to bring the game within two points. Carson Wentz would find Greg Ward from eight yards out, and convert on a two-point play, while another four-yard Wentz pass saw Travis Fulgham make up the difference.

With the game now neck-and-neck with the Steelers up 31-29, a collective gasp overcame Steelers Nation as an Eric Ebron fumble at the Steelers 49 gave Philadelphia the ball on their own 45 with half of the fourth quarter remaining.

The Steelers defense came up big, as Stephon Tuitt added a sack and the Eagles were forced to punt or attempt what would’ve been the longest field goal in Heinz Field history: a 57-yard miss by Jake Elliott which would’ve given the Eagles the lead.

The Eagles, with all of their timeouts, put Pittsburgh in a passing situation on 3rd-and-8 – the Steelers were all too happy to oblige, as Roethlisberger connected with Claypool yet again, this time for a 35-yard score to seemingly put the game out of reach.

However, the Eagles still had some fight left in them.

With two of their timeouts and the two-minute warning, Carson Wentz and his offense took the field again, but Bud Dupree and Stephon Tuitt had other plans – sacking the quarterback for a ten-yard loss.

Wentz failed to connect with Sanders, or his tight end Zach Ertz (who was held to a single catch for six yards) as the Eagles faced a 4th-and-20: and Wentz would be picked off by Steven Nelson to turn the ball over at the Steelers 25.

Pittsburgh would grind out the rest of the clock to hold onto a 38-29 victory, improving to 4-0 on the season, while Claypool would set various rookie records with his four-touchdown performance.