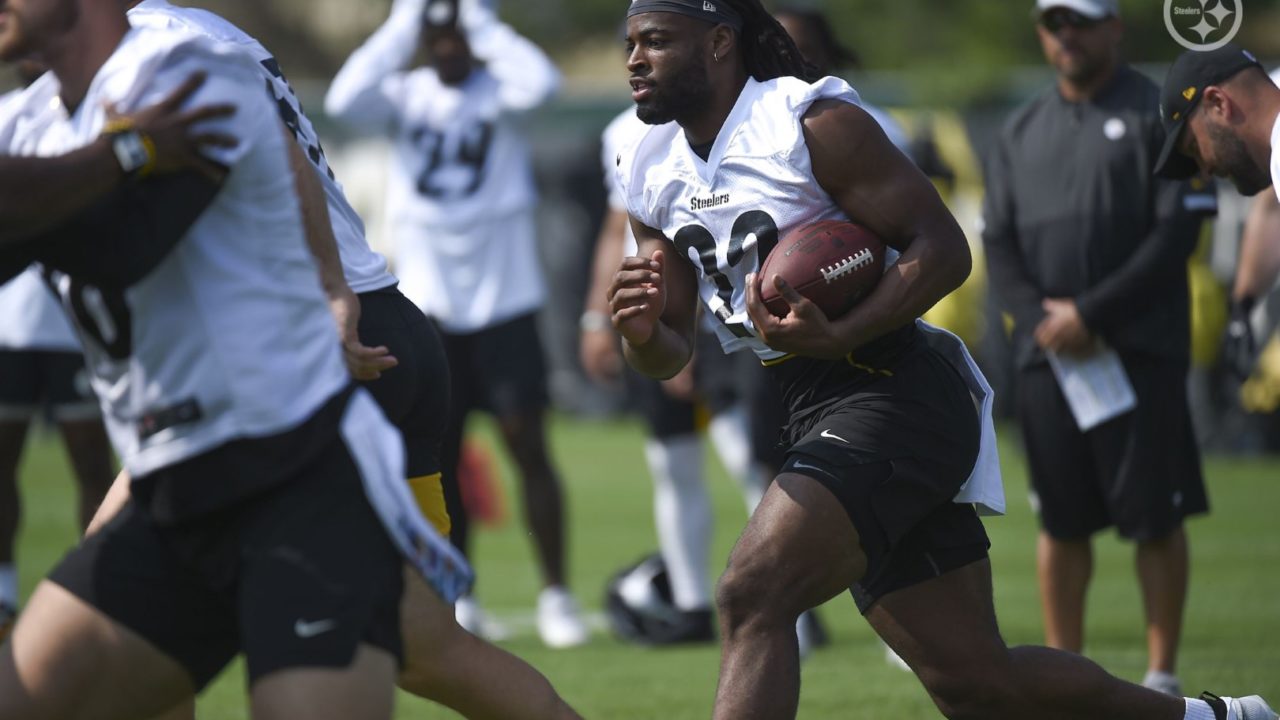 As soon as the 2020 Pittsburgh Steelers season ended, there was one position where everyone felt the team needed to improve: at running back.

While those predictions were inconsistent, and some had Pittsburgh taking a running back in later rounds, anyone with a pulse were unanimous in thinking that the Steelers were going to do something to shore up their last-ranked run game.

Heading into this year’s training camp, some of the names are the same while others are new additions. Here’s a preview of the running back depth chart, along with another player who figures to factor in highly in improving Pittsburgh’s rushing attack.

Nearly everyone’s consensus top pick for the Steelers prior to the draft, Harris racked up 3,843 yards on the ground with a 6.0 yards-per-carry average at Alabama. He accumulated most of those stats in his last two seasons as a junior and senior, scoring 39 of his 46 touchdowns in his final 26 games – of 51 games played (bowl and/or postseason included).

Harris is an every-down back who is also an adept pass-catcher. He hauled in 80 receptions for 781 yards and 11 touchdowns, bringing his total all-purpose yards up to 4,624 during his four years at Alabama.

Most impressive is his ability to protect the football, losing a single fumble in of a total 718 touches during his college career.

Pass protection from Harris is also a strong suit, making him a complete player that is receiving preseason hype to replicate what Le’Veon Bell once did in Pittsburgh. While those expectations may be highly placed for a rookie, Harris was the first running back selected in the draft for a reason: and the Steelers had to jump at pick 24 to make sure they got their man.

There’s no doubt that Harris will be the bell-cow in first-year offensive coordinator Matt Canada’s offense.

From the penthouse to the outhouse.

That’s what accurately describes Snell’s first two seasons as a pro, entering the league as a fourth round selection from Kentucky who put up 3,873 rushing yards in college.

Unfortunately, Snell has gathered a stigma amongst fans and media analysts as potentially not being up to playing at the pro level. I feel he’s garnered a bad reputation from previous offensive coordinator Randy Fichtner, who’s reluctance to consistently run the ball, as well as only use Snell in short-yardage situations, handicapped the running back’s best abilities.

He also has the potential to be “the guy”, having flashed when put in a feature role despite the lack of Steelers offensive output the last two seasons. Snell has had games with 75, 98, 91, 113, and 84 yards: all good for a 4.5-5.0+ yards-per-carry in those appearances.

He’s also been inconsistent, struggling in three other games where he’s been more featured and failing to reach at least 4.0 YPC.

However, I still think there’s a role for Snell as a quality backup who seems to do his best work once he’s in a rhythm. A renewed focus on the running game can only help, but he’s no longer a top option and may never be considered as one with the Steelers drafting Harris.

What can McFarland do in the Steelers offense? I’m not sure we’ll ever find out.

There was a flash or two for last year’s fifth-round draft pick. You may have blinked, saw the jersey number “26” and thought you were seeing double – Le’Veon Bell double that is.

McFarland was sparingly used as a rookie, seeing the most of his action in Week 3’s matchup against the Houston Texans where he ran the ball six times for 42 yards and caught a pass for seven. With James Conner and Benny Snell ahead of him on the depth chart, McFarland was often inactive on game days, appearing in only eleven games.

Everyone’s favorite scapegoat, lap dog, and early camp cut, Samuels entered the NFL with an undefined role – and still faces an identity crisis entering his fourth and final year on his rookie deal.

I’m not so quick to write Samuels off this season as many are. The Steelers typically hold onto three running backs, but they’ve also retained a true fullback and an extra “H-back” style player in previous seasons.

Samuels falls into the latter category. He’s someone you may not want to shoulder the burden of being a bell-cow back, but he’s versatile enough to be used in the passing game too.

And if you’re near the endzone? All Samuels does is score.

Samuels dropped in the 2018 NFL Draft because no one could figure out if he was a running back or a tight end. I expect him to stick around and find a niche in Matt Canada’s offense as both. With rookie Pat Freiermuth and a host of unknowns behind starting tight end Eric Ebron, I could see Samuels deployed in situations similar to David Johnson years ago.

Being a tweener can also be the kiss of death, but as we’ve seen with “Jay-Sam” running the wildcat offense two seasons ago, he’s versatile. And that’s something that Mike Tomlin and his staff place a higher value on, particularly with players on the bottom third of the roster.

Ballage was a favorite of mine coming out of college and entering the 2018 NFL Draft. Coincidentally, he was drafted 34 spots before the aforementioned Samuels.

Ballage also has an identity crisis, but it’s not position-specific: he’s been bouncing around less than ideal situations since entering the league three years ago, first with the Dolphins, then the Jets, and splitting time with the Chargers in 2020 as well.

Ballage’s yards-per-carry are as inconsistent as Snell’s – with more and worse lows – which is why he continues to bounce around the NFL.

He had odd usage from the jump, for a bad Dolphins squad that couldn’t get anything consistent from anyone. It should be no surprise he’s only had a single 100-yard rushing game in his career, but he’s also failed to have double-digit carries more than three times (27 games) before landing in Los Angeles.

Ballage’s numbers in eight games with LA were improved, gaining 290 yards (3.3 YPC) and catching 20 receptions for 99 yards. He would score three touchdowns, and be featured in four of those eight games with double-digit carries.

Unfortunately, those numbers are sporadic, starting with a 4.6 YPC average and then dipping to 3.78, 2.75 and 2.77 in games where he carries the ball at least a dozen times with LA.

Seeing those stats leads me to believe that Ballage is a bigger target for the practice squad than the active 53-man roster; provided the league adopts similar, flexible practice squad rules as they had in last year’s pandemic-influenced season.

Even with most fans chomping at the bit to dump Snell or Samuels, I’d be hard-pressed to see Ballage ascend the depth charts so quickly as to beat either of those players for a spot.

Speaking of scapegoats, Watt was the target of many fans’ ire in 2020.

“Why did we pay this guy?” was a common theme on social media, for those who did not understand that Watt was signed primarily as a special teams ace. His role as a blocker is secondary, as fullbacks are nearly extinct in the pass-happy NFL of this era.

Watt also struggled with injuries, and a common link over the last two seasons of poor Pittsburgh offensive output on the ground has been the lack of having a fullback available for the few (3-5 plays) they are necessary. Rosie Nix played a single game in 2019 while Watt missed four, and left at least two early with injuries in 2020.

Canada’s college schemes often deployed a fullback – quietly Watt lies in wait for an increase role which should also be a boost to the Steelers run game in 2021.