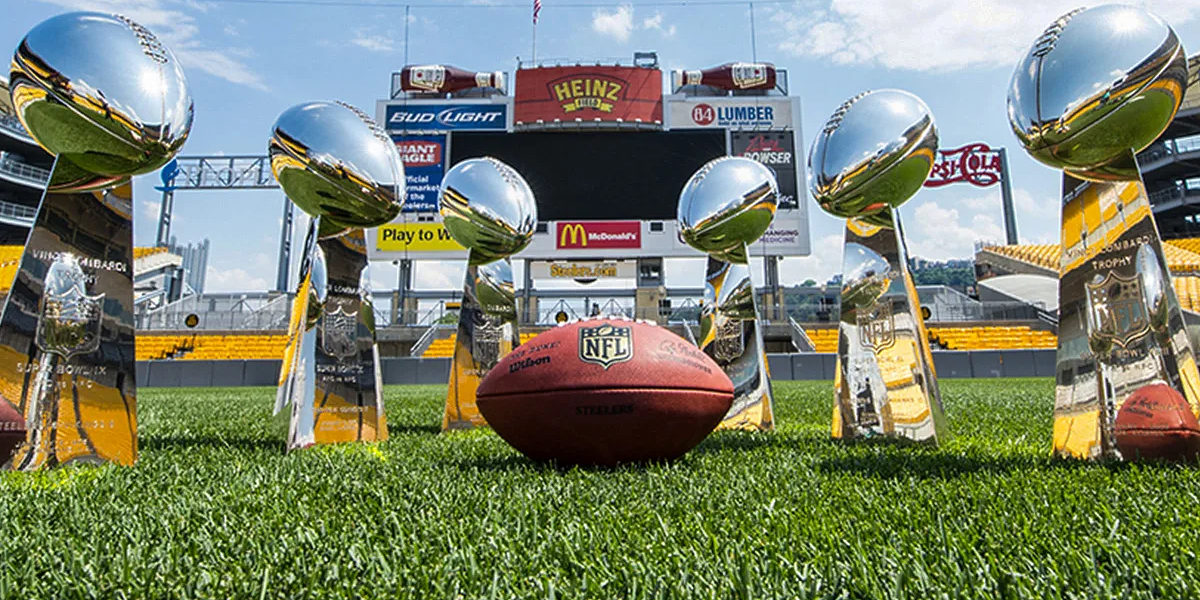 July 8th marks the inception of professional football in the city of Pittsburgh; the ‘birth’ of the Steelers on that date in 1933. As the seventh-oldest NFL franchise and oldest franchise in the AFC, we thought it’d be fun to throw a birthday celebration.

From the sandlots and Exposition Park…

Before Arthur J. Rooney, Sr., “The Chief”, was awarded an NFL franchise, however, the roots of Pittsburgh football were planted with the Hope Harvey Football Club. For the first time, Art J. Rooney and his brothers, Dan, Jim, and Vince (as the ball boy), played on a single team together. It was a “sandlot” team that was comprised of the “Northside Eleven”. Organized in the early 1920s (according to Rooney biographers, Rob Ruck, and his wife, Maggie) state “blue laws” prevented charged admission to organized sporting activities on Sundays, opening the door, however, to semi-pro teams playing ball on Saturdays and allowing them to ‘pass the hat’ for a few bucks from attendees that players used as salary and paid fees with. The Hope Harvey Football Club, in its day, was touted as one of the hardest teams to defeat in the city of Pittsburgh. The team dressed in Pittsburgh’s Hope Fire House while local physician, Dr. Walter Harvey, sponsored and served as the unofficial team doctor.

“These were hard playing sandlot teams who made their own uniforms,” Vince’s daughter, Kathy Rooney, said in a post on her website, “and passed the hat for their paychecks… they are the true spirit of the game.” Kathy (artist) and Ray Sokolowski (her husband and sculptor) immortalized them in sculpture, inspired by a Rooney family photograph, and unveiled the piece at the Hot Metal Grille (Southside) in 2004.

The team would later be sponsored by Loeffler’s Electronic Store and renamed after popular radios and the team was the “Majestic Radios”. Before the 1931 season, however, Jim Rooney opted to run for Pennsylvania General Assembly so Art renamed the team the “J.P. Rooneys” to help promote his brother’s campaign. It worked. The early semi-pro teams won at least two Western Pennsylvania Senior Independent Football Conference titles in the early 1930s, playing out of Exposition Park.

Thanks to Pennsylvania’s blue laws being repealed, 1933 marked the year that “The Chief” applied for and received Pittsburgh’s first franchise in the National Football League. The semi-pro “J.P. Rooneys” became the NFL’s Pittsburgh Pirates on July 8, 1933. Teams in the same city often took on the same, or similar, names, and Art Rooney wasn’t opposed to traditions. For sportswriters, however, the Pirates football team was given the unofficial nickname, the “Rooneymen”; the nickname persisted for decades. “The Chief” maintained ownership of the team, as did the Rooney family; Dan Rooney (son), owned the team from 1988 until his death in 2017 and predominant control was passed to Dan’s son, Art Rooney II. The team played mainly out of Forbes Field.

Throughout the 1930s, the Pirates (a pre-NFL merger team) were never able to finish a season higher than second place in their division. They made history by signing a future U.S. Supreme Court Justice in 1938, however. Byron “Whizzer” White (seen above running the ball) earned the biggest contract in NFL history at the time but played just one season before signing with the Detroit Lions over disagreements with Johnny “Blood” McNally, the head coach at the time. White led the league in rushing that season.

To the Pittsburgh Steelers

Just prior to the 1940 NFL season, Pittsburgh’s NFL team was renamed the “Steelers” and are one of the most successful post-NFL-merger franchises. With six Super Bowl titles (tied with the New England Patriots), the Steelers lay claim to eight AFC Championships and the second-most Super Bowl appearances (tied at eight with the Denver Broncos and Dallas Cowboys). The Steelers played their home games out of Three Rivers Stadium from 1970-2000 before the iconic location was imploded. That same year (2001), the Steelers’ new home at Heinz Field was built.

Thanks to the pioneering efforts of Art “The Chief” Rooney and the Rooney family, the Steelers celebrated their 87th birthday this week with all of Steelers Nation. Steelers fans, around the world, shared stories, pictures, and birthday wishes on social media. Here’s to those 87 years and the luck of celebrating even more black and gold seasons with the Pittsburgh Steelers.