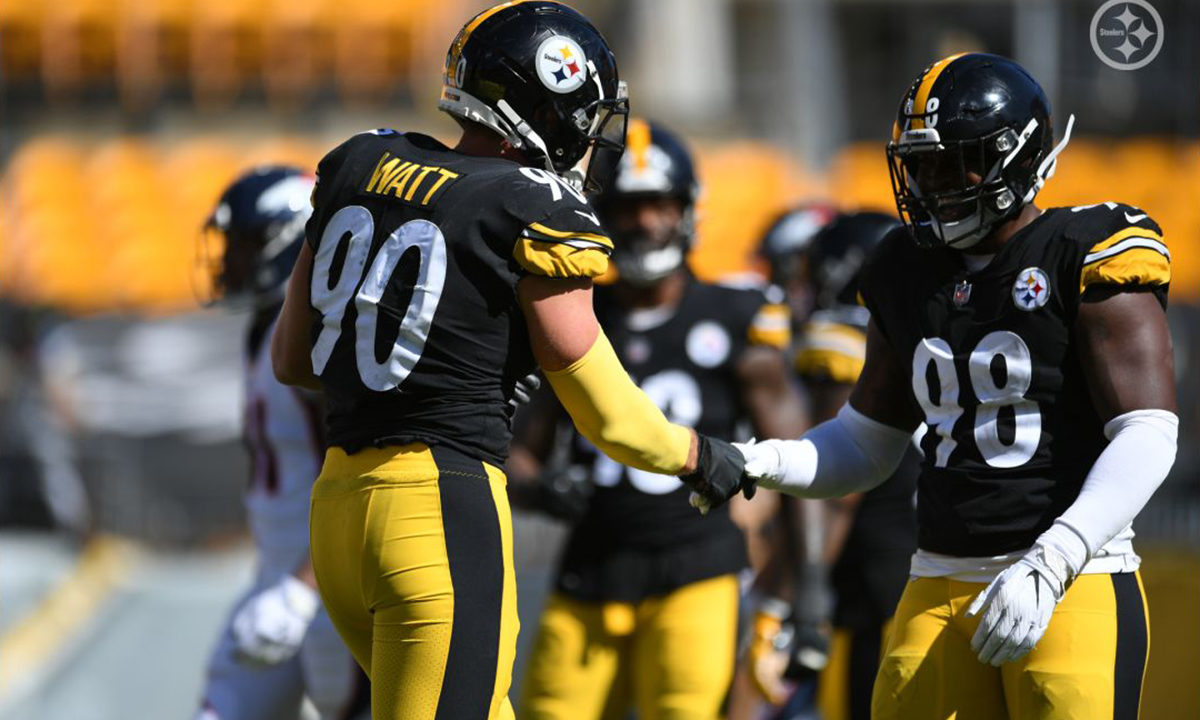 SCU’s training camp preview continues with a look at the Steelers linebackers: both the inside and outside variety.

The group returns with three of their four starters, as Bud Dupree signed a large contract with the Tennessee Titans during free agency. Some other moves were made as well, but the corps remains largely unchanged from what it was midway through to the end of the 2020 season.

Here’s a look at Pittsburgh’s linebackers heading into 2021.

What more can be said about the player many feel should’ve been Defensive Player of the Year in each of the last two seasons?

Watt also led the Steelers defense in tackles for loss with 23 and amassed an incredible 41 QB hits. He has forced 17 fumbles in three seasons, and somehow always finds a way to get his hands on the ball, with four interceptions in four years as a pro.

He’s likely the most complete edge rusher in the NFL and the heart-and-soul of the Steelers defense.

Last year’s third-round draft pick got a jump start at replacing Bud Dupree early, when the latter was placed on IR after Week 11’s overly postponed game against the Baltimore Ravens.

What ensued was a quiet campaign that matches or exceeds the hype Cleveland is receiving by signing Jadeveon Clowney.

Here are two sets of stats that should relieve Steelers fans of Dupree’s departure as Highsmith steps into starting role full-time in 2021.

I know someone will say "Clowney faces double teams"

Dupree went on IR after game 3: played 137 snaps to Highsmith's 44 in first 3 of those games tallied above

There are some growing concerns about the Steelers outside linebacker depth and rightfully so.

Cassius Marsh, who joined the team from the 49ers practice squad late last season, was far from effective when he stepped in for Highsmith against the Browns in a Wild Card loss.

Quincy Roche was drafted in the sixth round and could be considered a sleeper pick.

Both are inexperienced to where the organization is on record stating they are still seeking edge rushing help.

The depth is so sparse at this time, the other names coming to camp have little to nothing to say about them.

One of the biggest losses last season was Devin Bush, the quarterback of the Steelers defense.

Bush was placed on IR after playing five games – and while his backup Robert Spillane played admirably, losing the defensive play-caller to injury is as crucial as losing your offensive one. (See also: Ryan Shazier.)

Bush’s impact will be the greatest thing that was missing throughout last season, as the Steelers struggles in the center of the field continued without that centerpiece. After a stellar rookie start, Bush was already on pace to best all of his numbers from 2019 before being lost for the season.

Look for that trend to continue going into 2021.

Williams was unceremoniously released by the Steelers this offseason – due to cap reasons – and then brought back soon thereafter.

As a veteran presence both on the field and in the locker room, Williams is a valuable run-stopping and blitzing component to the Steelers schemes. In 14 games played during 2020, Williams added 14 tackles for loss – a career-best.

While he’s never been known as a coverage linebacker, the defense is still better off with Williams on the roster than off of it.

Spillane went from an unknown special teams player on the cusp between the active roster and practice squad, to a household name in Pittsburgh when Devin Bush was placed on IR after Week 6 last year.

In what was a Cinderella story, Spillane hopped into Bush’s role – with some help in coverage schemes – and ignited the defense with football instinct taking over for genetic ability.

Spillane would make several highlight reels in 2020, stopping Titans RB Derrick Henry like a brick wall, and being Lamar Jackson’s first-ever pick-six in a high-profile game one week later against the Ravens.

Unfortunately, Spillane would also succumb to injuries, being placed on IR for the final four games of the season. He figures to be top inside option after Bush and Williams in 2021.

A fifth-round pick in 2018, Allen enters a contract season after converting from safety to inside linebacker last offseason.

The conversion netted him more playing on defense after Bush’s injury, as Allen has better coverage skills than Williams or Spillane, and was used in more obvious passing situation downs.

He’ll likely factor in with a similar role in subpackages in 2021 as well as continue to be a load on special teams coverage units.

The clock is ticking on Ulysees Gilbert III, a 2019 sixth-round pick who has failed to consistently stay healthy and contribute to the team.

In his stead, the Steelers brought back Tegray Scales, an undrafted linebacker who fought back from college injuries to make the practice squad and then the active roster for four games last season.

Fourth-round rookie Buddy Johnson was a Butkus Award semifinalist with Texas A&M last season, with whom he led in tackles, TFL, and forced fumbles. His four sacks in ten games were second on the squad.

As a leader on the SEC’s top defense, he joins one of the NFL’s top units ready to contribute in any way he can – most likely, he’ll earn a roster spot over the other players listed (and not listed) in this section.

The Steelers linebackers are another solid unit from a team which led the NFL in sacks for a fourth-straight season.

While there’s some writing on the wall from analysts, the entire group is incredibly young – save for Williams who turns 32 in December. The loss of Dupree is big as the former first round pick finally blossomed into a premiere pass rusher over the last two seasons, yet the wait for his development with the rise of Highsmith’s should see the Steelers D continue without missing a beat.

Just Watt’s presence alone puts this group over the top.