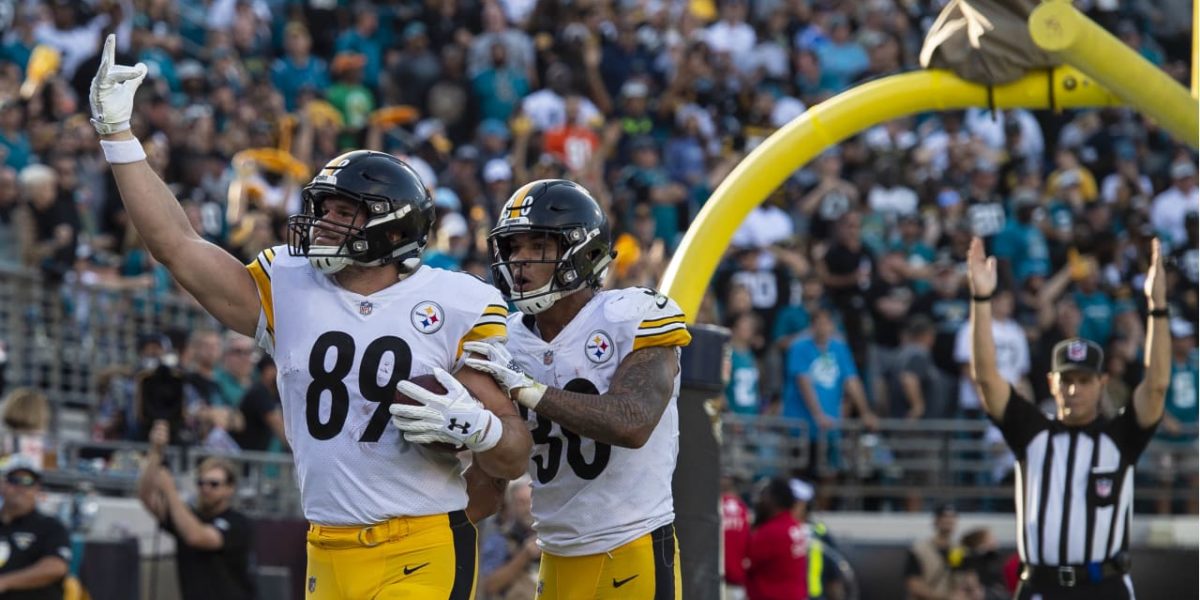 It’s always fun to jump into our virtual time machine to look back at some great moments in Pittsburgh Steelers history. This week, we’re only traveling to November 18, 2018, though. In Week 11 of the 2018-19 NFL regular season, the Steelers traveled to Florida to face the Jacksonville Jaguars.

Pittsburgh could not seem to find any real rhythm during the first half of the game. It seemed like nearly every pass that Ben Roethlisberger threw for more than short-yardage ended up falling incomplete. On two deep throws, both to Antonio Brown, the ball was intercepted; Jalen Ramsey snagged one pass while Barry Church grabbed the other. Thankfully, the defense held up and forced Jacksonville to rely on the leg of Josh Lambo to put points on the scoreboard. As the teams walked into the locker room at halftime, the Jaguars led the game, 9-0.

It looked like it might be more of the same from the Steelers in the third quarter. Jacksonville scored on a Leonard Fournette rush for two yards into the end zone to go up, 16-0. It was historically a disastrous outing for Pittsburgh when Myles Jack intercepted another Roethlisberger pass that was reversed due to a penalty on Jaguars teammate Calais Campbell for roughing the passer. After a run, a reception, and two more runs by James Conner, Roethlisberger once again tried to hit Brown deep and was intercepted by Ramsey for no gain.

The Steelers looked like a Junior Varsity team on the field through the first three-quarters of the game, in many ways, at least on offense, save for one big pass play to Brown. Meanwhile, T.J. Watt (2), Javon Hargrave (2), Vince Williams (1), and Cameron Heyward (1) all leveled Jaguars quarterback Blake Bortles.

The game was winding down and the Steelers knew they looked worse than their 6-2-1 record as they entered what would become a historic fourth quarter for the team. Before that, punter Jordan Berry looked like he might end up the Steelers’ MVP for the game.

On their first and second offensive series of the final quarter, the Steelers offense still wasn’t able to produce points. On the third series, however, Roethlisberger saw his targeted players begin to pick up his throws, especially JuJu Smith-Schuster. With 2:36 left on the game clock, Roethlisberger was able to find Vance McDonald for an 11-yard catch and score.

The Steelers’ defense was able to quickly get the ball back to the offense with just 1:42 left in the game. Roethlisberger went to work hitting Conner, Smith-Schuster, and Brown until the ball was intercepted, once again, by D.J. Hayden. The play was called back due to a facemask penalty by Hayden.

On the very next play, with 0:15 seconds left in the game, Hayden was called for a defensive holding penalty. Those two plays got Pittsburgh to the Jacksonville one-yard line. With eight ticks left, Roethlisberger called his own name and ran the ball into the end zone, barely missing his own offensive lineman, to put the Steelers on top, 20-16.

The Jaguars were unable to respond to the sudden resurgence of the Steelers thanks to a strip-sack by Watt that was recovered by Heyward and sealed the crazy fourth-quarter comeback and the win.