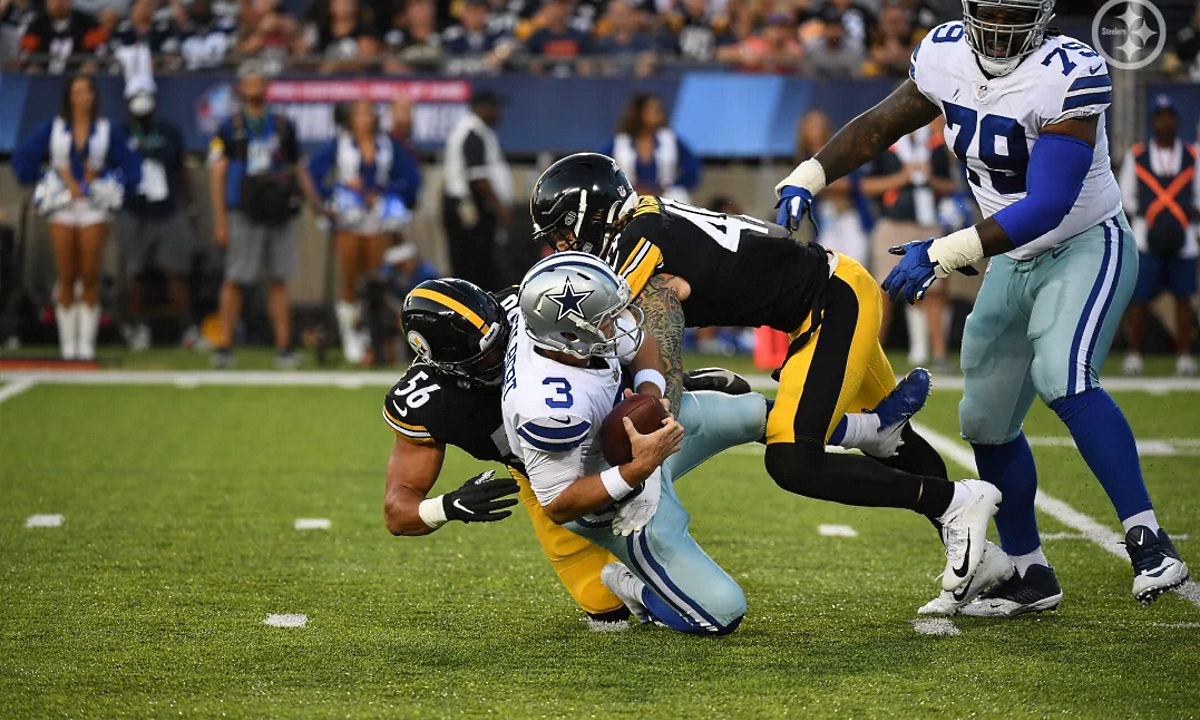 by Terry Fletcher (TerryinSoCalif) on August 6, 2021

Okay, the first offensive play of the game for the Pittsburgh Steelers was a pass from Mason Rudolph to wide receiver Diontae Johnson, completion. So, now we can breathe (and hope the ‘drops’ are in the past).

Rookie running back Najee Harris started in the offensive backfield. Watching Harris run the ball, carrying the Cowboys defenders with him, was impressive out of the gate.

I was surprised to see receiver Chase Claypool in the game, but he had a nice completed pass. And then the miss: Rudolph tried to hand-off to Claypool in-motion in the backfield and Claypool never touched the ball; fumble recovered by the Dallas Cowboys. Pocket awareness and attention to timing and detail have never been a strength for Rudolph and it was a glaring weakness on that play. Of note, in the first half, Claypool made an athletic catch close to the end zone and had the wind knocked out of him. He did walk off the field on his own accord and appeared okay, but the announcers gave no update when there was an injury timeout, and went to commercial

Thankfully, the Steelers’ defense held the Cowboys to just three points on the turnover. Alex Highsmith had a sack and a tackle. A near-interception at the one-yard line by Tre Norwood on the broken-up pass forced Dallas to kick the field goal.

Before halftime, both teams went back and forth moving the ball down the field, however, Dallas did a bit better with the Steelers defense not stopping the run game. Three field goal attempts by the Cowboys were all missed and Pittsburgh missed one as well with rookie kickers.

Steelers seventh-round selection Pressley Harvin III made a great punt in the first half – a 48-yarder – that was downed at the Dallas one-yard line. For a short, stocky guy, he’s got a strong, accurate leg. A later punt return by special teams rookie Mathew Sexton went for a 35-yard return to set up great field position.

The second half was all about running the football, and power rushing had Anthony McFarland Jr. with yardage and Kalen Ballage earning a rushing touchdown. Ballage is a fourth-year player out of Arizona State the Steelers picked up in the offseason.

Early in the fourth quarter, Mark Gilbert made a good play to break up a pass and save a fourth-down conversion by the Cowboys. The Steelers took over offensively and moved the ball down the field with Joshua Dobbs in at quarterback after Dwayne Haskins played the majority of the second and third quarter. Dobbs tossed a seven-yard touchdown pass to rookie receiver Tyler Simmons to put the score at 16-3 over Dallas.

With five minutes left in the final quarter and another hard, long punt by Harvin, the ball bounced off the Dallas receiver’s chest and was recovered by receiver Anthony Johnson on special teams around the 26-yard line. Dobbs looked really good in the passing game and showed he should be quarterback No. 3 with his mobility and good decisions under center.

Safe to say Chris Boswell‘s job is safe with the way the kicking game went today, and the Steelers went for it on a late fourth-and-one only to see the ball fall incomplete and the ball be given back to the Cowboys.

Overall, this was a strong game and a good look at the Steelers rookies and young guys. Attention to stopping the opposing team’s running game needs to be a priority on defense. Too many yards were given up and wide-open receivers were an issue for Pittsburgh defensively. On the positive, the defense had two takeaways, four sacks, and multiple quarterback pressures.

If I had to guess, based on this game, the Steelers’ quarterback depth chart would be Ben Roethlisberger, Haskins, Dobbs, Rudolph.

The Steelers won, 16-3. Football is back! Congratulations to all of the Pro Football Hall of Fame inductees!