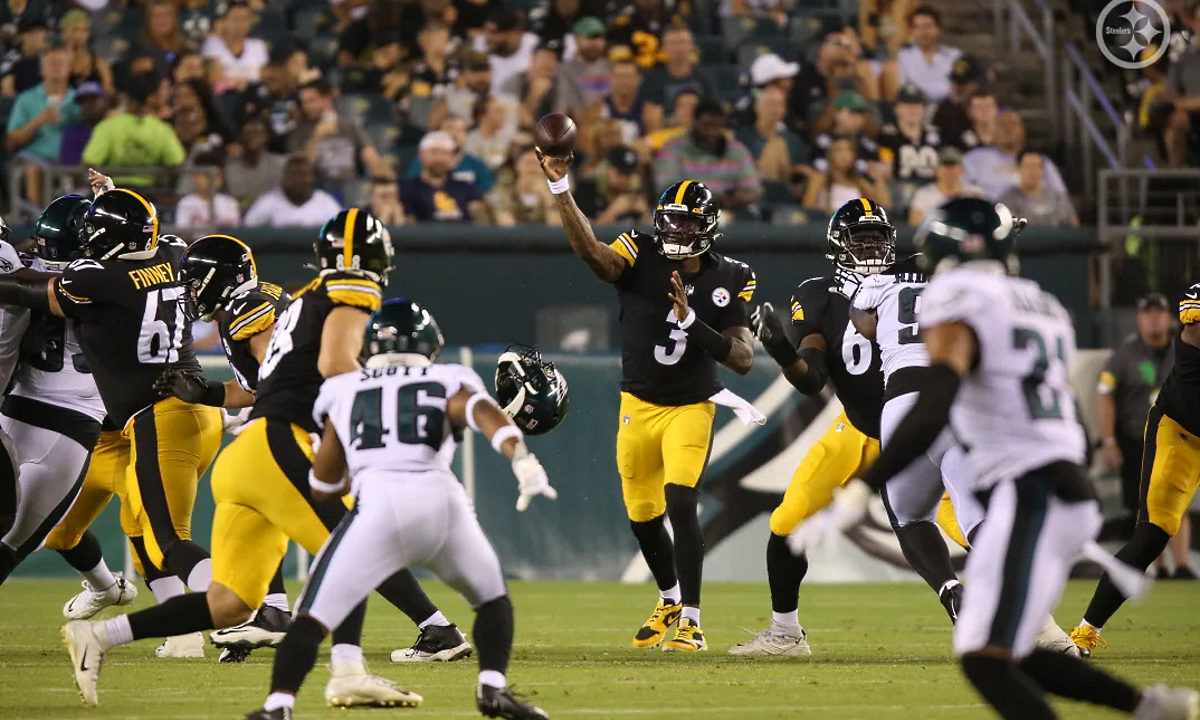 On Thursday night, the Pittsburgh Steelers certainly didn’t get off on a quick start in their second – and the Philadelphia Eagles’ first – preseason game of the 2021-22 NFL season. After facing several major deficits, including a 13-0 hole they had to dig out of, the Steelers were able to rebound and pull off the win, 24-16, at Lincoln Financial Field.

Philadelphia received the opening kickoff and Jalen Hurts, who is trying to solidify his position as the Eagles’ starting quarterback, went on an aerial attack. Hitting hit tight ends Dallas Goedert and Zach Ertz with ease signaled areas where the Steelers are still not performing well at inside linebacker. That could change soon, for Pittsburgh, with news that during the game the Pittsburgh front office worked out a trade deal to acquire former Pro Bowl linebacker Joel Schobert from the Jacksonville Jaguars, per NFL Network’s Tom Pelissero. Dropped passes stalled the initial drive that forced Jake Elliot to kick a 47-yard field goal to put the Eagles up, 3-0.

After a Steelers offensive series that saw Najee Harris limited to four carries for just ten yards due to 24 nullified yards due to holding penalties, Eagles quarterback Joe Flacco – no stranger to the Steelers – was able to move the ball quickly to hit Quez Watkins for a 71-yard touchdown. Watkins, who’d out-worked Terrell Edmunds, Cam Sutton, and Tre Norwood, gave the Eagles a 10-0 lead.

The story of the game then became that of Dwayne Haskins giving the Steelers a big bounce-back offensively. At the end of the first half and then to open the second half, Haskins moved the offense to get the Steelers within two points of their hosts. The first-half drive was 70-yards that featured Haskins completing 5-of-5 passes for 42 yards, two carries by Jaylen Samuels for 19 yards, and a one-yard run by Anthony McFarland that was made possible by an excellent block by rookie tackle Dan Moore. The opening second-half drive went for 75 yards in just ten plays. The Steelers were able to convert 3-of-3 third-down situations and cap the drive with a pass from Haskins, who had drawn the Eagles defense offside for a free play, to Anthony Johnson who was on an island in the end zone.

Just two plays into the very next offensive series for the Eagles, linebacker Jamir Jones hit quarterback Nick Mullins and the ball popped into the air and into Justin Layne‘s hands for a midfield interception. The play allowed AnSamuels to give the Steelers their first lead in the game, 21-16, after an 11-play, 50-yard drive that included a six-yard pass to Cody White but was mainly Samuels’ highlight reel.

The Steelers offensive line was in full control, especially in the second half, giving Haskins plenty of time to make plays.

Although Joshua Dobbs was intercepted on a forced pass to Cody White, the Steelers got the ball back just three plays later when Lafayette Pitts grabbed a pass meant for Adrian Killens and returned it to the Steelers 29-yard line late in the fourth quarter.

The Steelers were able to maintain that score and finish the game with a win in the “battle for Pennsylvania”; their second win in two weeks of preseason play.