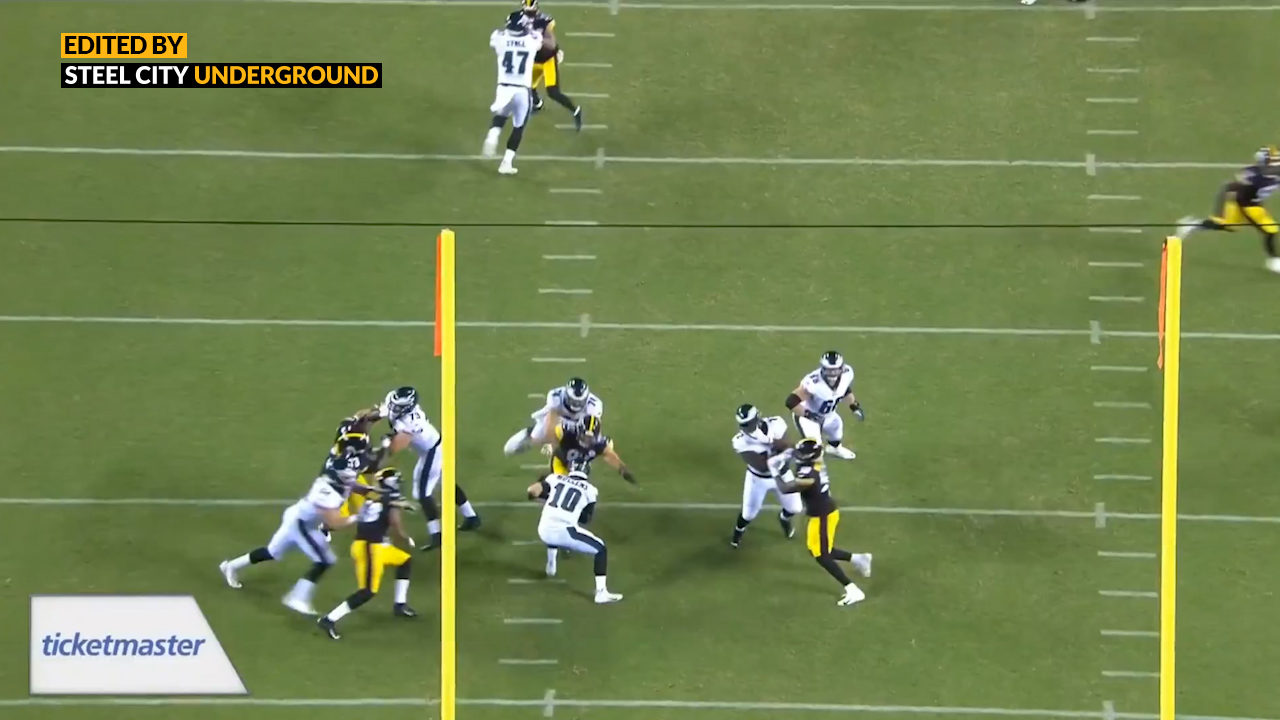 Steel City Underground will pick an exceptional play of the game as a highlight each week of the Steelers 2021 preseason and regular season. Stay tuned as we hand-select the very best from the Black and Gold!

On Thursday night, the Pittsburgh Steelers were the visitors at Lincoln Financial Field and hosted by a Philadelphia Eagles team that had yet to participate in the 2021-22 NFL preseason games. With the Steelers having had one exhibition under their belts due to the Hall of Fame Game, head coach Mike Tomlin had hinted that many of the players on Pittsburgh’s roster that hadn’t had an in-game opportunity, or guys the staff wanted to evaluate on another level, would be getting more opportunities to show if they had improved throughout training camp and could translate that work real-time.

Early in the game, the Eagles looked as if they would dominate the Steelers. Pittsburgh, however, was not to be taken that lightly and found a way to bounce back and respond.

In the fourth quarter of the game, rookies Quincy Roche (LB), drafted by the Steelers in the sixth round (216th overall), and Isaiahh Loudermilk (DE), drafted in the fifth round (156th overall) of the 2021 NFL Draft, were able to make a combined concerted effort to display their ability to get to opposing quarterbacks and disrupt any offensive series the Eagles were trying to put together to take back the lead on the scoreboard.

After the kickoff by Sam Sloman to give the Eagles the ball, quarterback Nick Mullens took over the Philadelphia offense and was able to give the ball to Jason Huntley who was stopped at a seven-yard gain by Roche. On the next play, Huntley was again asked to carry the ball but the play was nullified due to offensive holding. On second-and-13, after the Steelers declined the penalty, Roche and Loudermilk were able to combine their skills to force a loss of nine yards that would result in an Eagles three-and-out.

Both Roche and Loudermilk are working behind veterans in training camp and having good preseason outings could help shore up their stock in the Steelers depth chart this season and potentially earn them both a bigger role in Pittsburgh’s overall future. In the game, Loudermilk logged two tackles (one solo), one tackle for a loss, one pass defended, and one quarterback hit in addition to the shared sack with Roche who logged two tackles (one solo), and one quarterback hit.