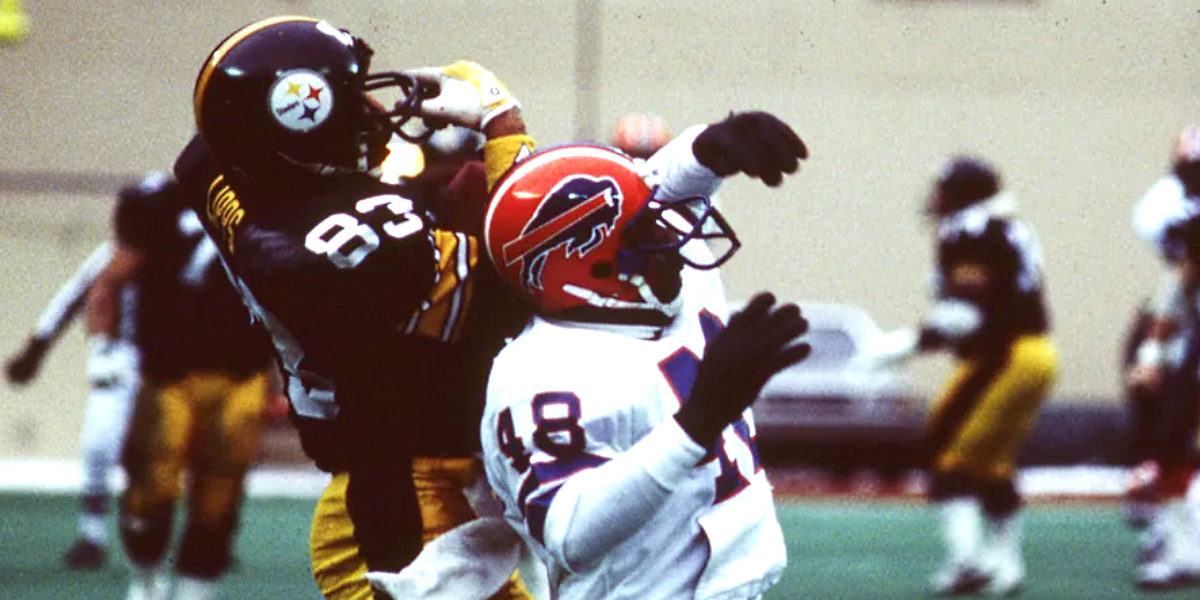 Before the NFL officially gears up for the 2021-22 regular season, Steel City Underground will be taking fans back in time to feature events, special moments, and historical times in the world of the Pittsburgh Steelers and Steelers Nation. Join us as we revisit these moments in our “Throwback Thursdays”.

There are three games in Pittsburgh Steelers history that tied each other for the team’s biggest comebacks; each of them featured the Steelers coming back from a 21-point deficit. The games took place in 1953, 1985, and 1997. As the Steelers get ready for the 2021-22 NFL regular season with an opening game against the Buffalo Bills, we thought it’d be fun to focus on the December 15, 1985, game that had the Steelers up against it only to create some big plays that gave them a 30-24 comeback win.

The game between the Steelers and Bills was held on the ‘astroturf’ at Three Rivers Stadium in 17-degree Fahrenheit weather with a wind chill of three, 64-percent relative humidity, and the wind a brisk 14 mph; it was a perfect December football game setting. Buffalo entered the game with a 2-13 record to Pittsburgh’s 7-8 record and were ten-point underdogs according to sportsbook odds. That made for an interesting stage for a Bills team that got on top and fought to stay there.

The Bills’ 1985 draft class has been touted as one of the best in NFL history. Bill Polian took over as general manager and liked Bruce Smith over Doug Flutie as the teams’ potential first pick. Smith became an 11-time All-Pro selection and two-time NFL Defensive Player of the Year, logging 200 sacks by the end of his career. The Bills also picked Frank Reich in the third round at quarterback. Andre Reed, chosen in the fourth round at wide receiver, went on to become the leading receiver in Bills franchise history, tied for third in NFL history at 951 career receptions at the time of his retirement (2000) behind Jerry Rice and Cris Carter.

Buffalo was able to get on the scoreboard first thanks to a 77-yard rush the Steelers couldn’t shut down that went the distance by Greg Bell. It was the only score made by either team in the entirety of the first quarter.

In the second quarter, the Bills struck early again. Jerry Butler scored on a 33-yard pass from Bruce Mathison and Don Wilson was able to grab a ball the Steelers’ offense fumbled and carried it for 61 yards into the end zone to put Buffalo up 21-0, and the more-veteran Steelers on notice. Kicker Scott Norwood was perfect in putting the PATs through the uprights each time.

Later in the second quarter, Scott Campbell found veteran receiver Louis Lipps open for a 13-yard pass and touchdown that gave the Steelers their first points in the game. The Steelers would then get a four-yard burst on the ground into the end zone from Frank Pollard to close the score to 21-14 after Gary Anderson converted both PATs.

After halftime, both teams struggled to produce the offense to get into the end zone. Instead, the Steelers and Bills leaned heavily on their placekickers to score with their legs. Anderson was able to successfully kick two field goals (26-yard and 31-yard) in the third quarter. Just ahead of the final quarter of the game, the Steelers were trailing by just one point.

In the fourth, Norwood got just one final opportunity to give Buffalo points in the game when he kicked a 24-yard field goal. The Steelers answered with a 45-yarder but they weren’t giving up on a full comeback and win. Walter Abercrombie would seal the win for the Steelers by plunging into the end zone on a 2-yard rush to set up Anderson for the PAT. The Steelers dug themselves out of a hole no one expected them to get into in the first place.

The game was a bit of a spectacle, at times, with ten fumbles between the two teams and four interceptions (two by Campbell, two from Mathison), six combined sacks for a total loss of 60 yards, and less than 300 passing yards by either team as they focused heavily on the run.

Donnie Shell and Dwayne Woodruff both had picks in the game while Keith Gary logged one sack for the Steelers’ defense.