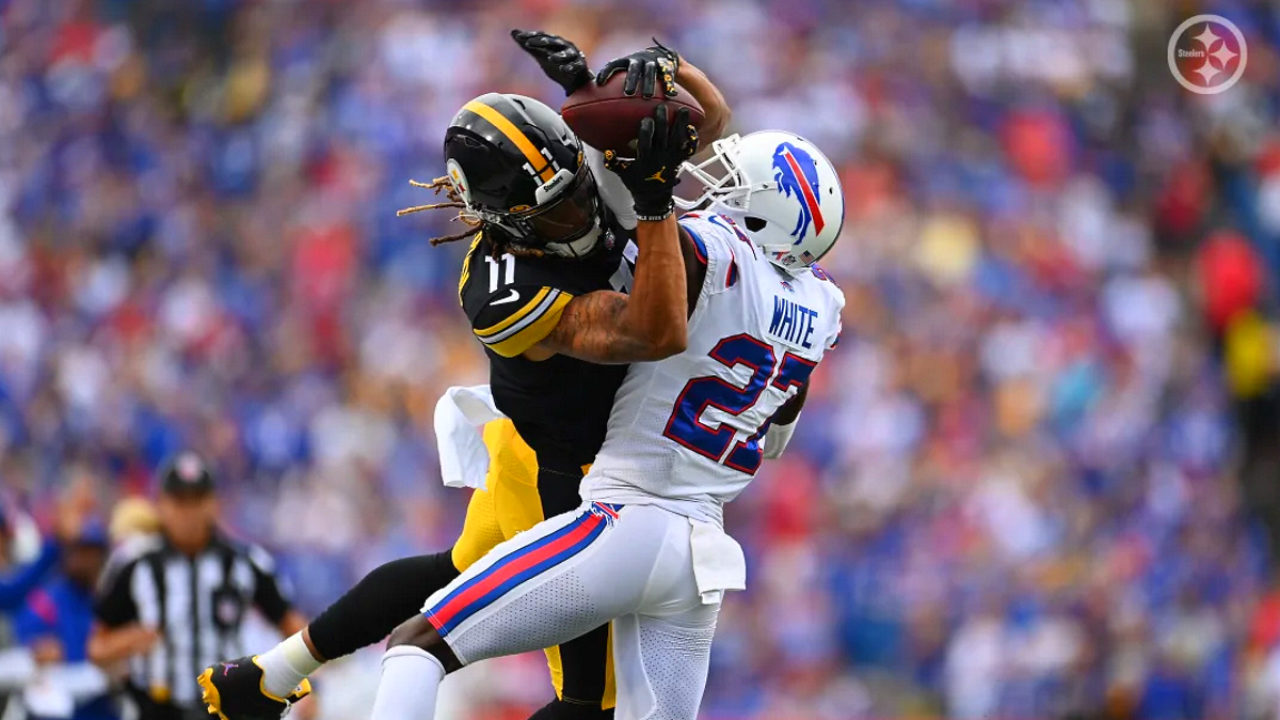 3Rivers’ Takeaways: Steelers refuse to give up in 23-16 win over Bills

Week One of the 2021 NFL regular season was billed early as a major blowout win by the Buffalo Bills over the Pittsburgh Steelers. The Steelers heated up in the second half of the game with big defensive plays and an offense that appeared more comfortable challenging their opponents and earned the 23-16 win.

The Steelers won the coin toss and deferred. Unfortunately, the coverage team was unable to keep Isaiah McKenzie from taking the kickoff 75 yards down the field into Steelers territory. That required that the Steelers defense defend the red zone very early in the game. They accepted the task, with Cameron Sutton making a play on Stephon Diggs for a loss of two yards, Cameron Heyward getting a hand on Josh Allen‘s pass, and forcing the Bills to settle for a 37-yard Tyler Bass field goal.

When a strip-sack on Ben Roethlisberger by Mario Addison (recovered by Okorafor) forced a punt, the Steelers defense once again held with Sutton knocking away a pass to Diggs. T.J. Watt would earn a strip-sack on Allen; Heyward would recover the ball. It was clear early on that the game was going to be one of earning inches, and preventing turnovers, as each team looked for chinks in each others’ armor.

Where Pittsburgh struggled was in getting their offense in sync. With a young offensive line and rookie running back Najee Harris in the backfield, the Bills were stout along their defensive front and made it extremely difficult for the Steelers to gain rushing yards. By the end of the game, Pittsburgh had recorded just four rushing first downs, and 75 rushing yards on 21 attempts. Harris had 16 carries for 45 yards as the Bills focused on his athleticism and big-play ability to force Roethlisberger to spread out the offense and pass the ball.

Exiting the locker room, the Steelers were well aware they were down 10-0. Whatever head coach Mike Tomlin and the other staff may have said, it was clear adjustments were made and the message received. Roethlisberger came out looking more comfortable, relying on his veteran experience, while Josh Allen cooled off a bit in the Bills offense.

While the run game still was hard-fought, Chase Claypool, JuJu Smith-Schuster, and Diontae Johnson were able to turn things up and start moving the sticks. They looked more confident challenging the Bills’ defensive backfield. While Smith-Schuster led all receivers with 52 yards, it was Johnson who was able to score the lone touchdown catch.

There’ve been concerns during the preseason that the Steelers’ inside linebackers might be liabilities. Ulysees Gilbert made a big splash play for a defensive touchdown when he scooped a blocked Matt Haack punt and took it into the end zone. Devin Bush had ten total tackles.

The Steelers’ defensive backfield looked better in the second half of the game as Sutton had a big game; he recorded two big pass defenses and earned two tackles for a loss.

T.J. Watt was worth every penny the Steelers paid to extend his contract to keep him with the team for another five years. Melvin Ingram and Alex Highsmith perfectly compliment each other and bring their own unique gifts to the mix.

The Steelers have a young offense that faced their first real NFL challenge this week. Sorry folks, preseason games don’t count. It was veteran leadership, however, that helped Pittsburgh dig deep when down to keep everyone motivated to keep pushing in order to earn this Week One win.

Kudos to the offensive line for playing feisty and not allowing the Bills’ defensive rush to completely overwhelm them.