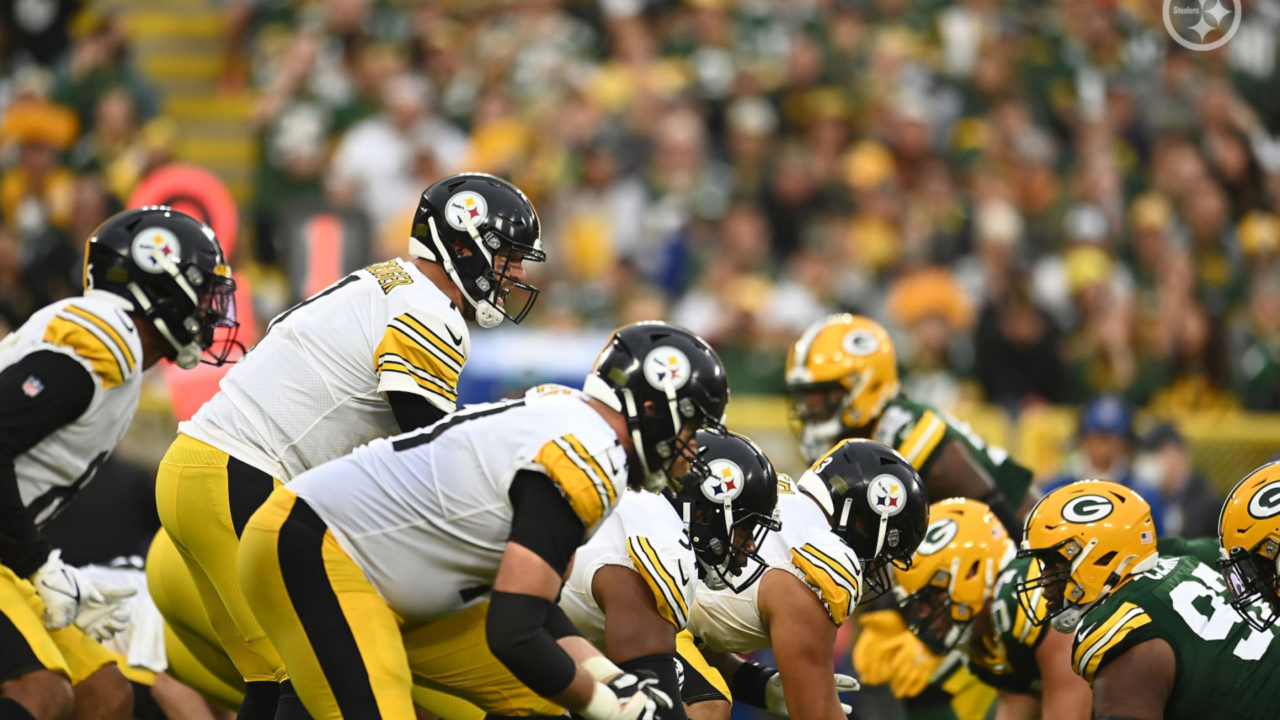 The Pittsburgh Steelers further fell into a hole this season with a 27-17 loss to the Green Bay Packers on Sunday: their record now 1-3 and firmly at the bottom of the AFC North standings.

While no one expected them to defeat the Packers on the road, there was still a glimmer of hope that was then shattered with some missed opportunities and poor plays.

The Steelers NFL odds to win the Super Bowl are currently in the middle of the pack at +6000, with their loss – and anymore – likely sending their chances further down the list.

That much shouldn’t surprise anyone. Though the expectations on Sunday were diminished, there were still some surprises which were, mostly, in the negative column.

I’m not sure what has gotten into Ben Roethlisberger as of late. We knew heading into Week 3’s game against the Cincinnati Bengals that he was nursing an injured pectoral muscle.

Whether that injury is still lingering or not, we don’t know. What we do know is that Big Ben has been off the mark with some of his throws – some too low, some behind his receivers, some overthrown too far or too high.

He hit an absolute dime early on to Diontae Johnson for the game’s first touchdown, but would miss at least three connections with JuJu Smith-Schuster, all of which would’ve been big plays – including a wide-open touchdown pass.

Some other decisions really boggled my mind as well.

There was the 3rd-and-6 play where Dan Moore Jr. was nearly thrown onto his quarterback, with Ben not getting rid of the ball nearly quick enough as his line collapsed and he lost control of the football – giving Green Bay the advantage at the Steelers 23-yard line.

The final interception of the game was a desperation throw, and one I’m not even willing to acknowledge. It’s the tosses into the dirt on short, outside throws to Johnson, overthrowing James Washington (I’m not even sure if he played, that Chase Claypool would’ve gotten up high enough to catch it), a crossing route which could’ve caught JuJu in stride, or completely missing an open Pat Freiermuth on fourth down – and setting for a checkdown to Najee Harris.

To say these plays are surprising? They were. Now they’re starting to become too commonplace and it has to change.

Najee Harris leads in what?

The Steelers are dead last in rushing offense, but their rookie running back is somehow generating yards – and tons of them.

Most scrimmage yards by a rookie this season:

The fourth round rookie has shown promise. He’s also full of potential.

But he had neither of those on yet another afternoon where the Steelers offensive line played below the mark.

The aforementioned strip-sack of Ben Roethlisberger was all on Moore. That was a critical, game changing play that the Steelers cannot afford when playing against an upper echelon opponent such as the Packers.

Roethlisberger got the Steelers to Green Bay’s 32, then missed JuJu Smith-Schuster on first down, and James Washington on third down. Each incomplete pass bookended Harris losing two yards.

Mike Tomlin decided to send out Chris Boswell for a 52-yard field goal try, as the Steelers were trailing 14-7. Oddly, Packers head coach Matt LaFleur didn’t send his own kicker, Mason Crosby out, in a similar spot, going the same direction in the first quarter.

I was a bit concerned that this was the wrong move, especially in the light rain and wind – but the ball bounced the right way off of the upright and over the crossbar for a successful conversion.

Tomlin’s fourth down call in the fourth quarter

Forget the two fourth down play calls, let’s talk about the one they didn’t even run!

Down 27-10 as the teams switched sides for the fourth quarter, Roethlisberger hit Diontae Johnson for a short pass that gained zero yards.

What if I told you this player didn’t get the first down? pic.twitter.com/FRdXpARlGe

This snafu, which saw Johnson go backwards would bring up a 4th-and-4 situation from Green Bay’s 37. Johnson would strike yet again, this time penalized for a false start, setting the Steelers back to the 42 – as Mike Tomlin pulled his offense in order to punt.

The decision adds to the bizarre trend of Tomlin opting to punt instead of going for it – even down three possessions. Did he believe they could possess the ball three more times in the half and score on all of them?

I understand the offense hasn’t been great, but these calls have happened too frequently as of late, going back to a similar call back in the Wild Card game against the Browns, and again last week against the Bengals.

The Steelers defense would force a 3-and-out after, but lose almost an addition two more minutes as well as a 21-yard field position swing too.

If you’re losing by three possessions, why not go for it? (As they did on their next drive!)