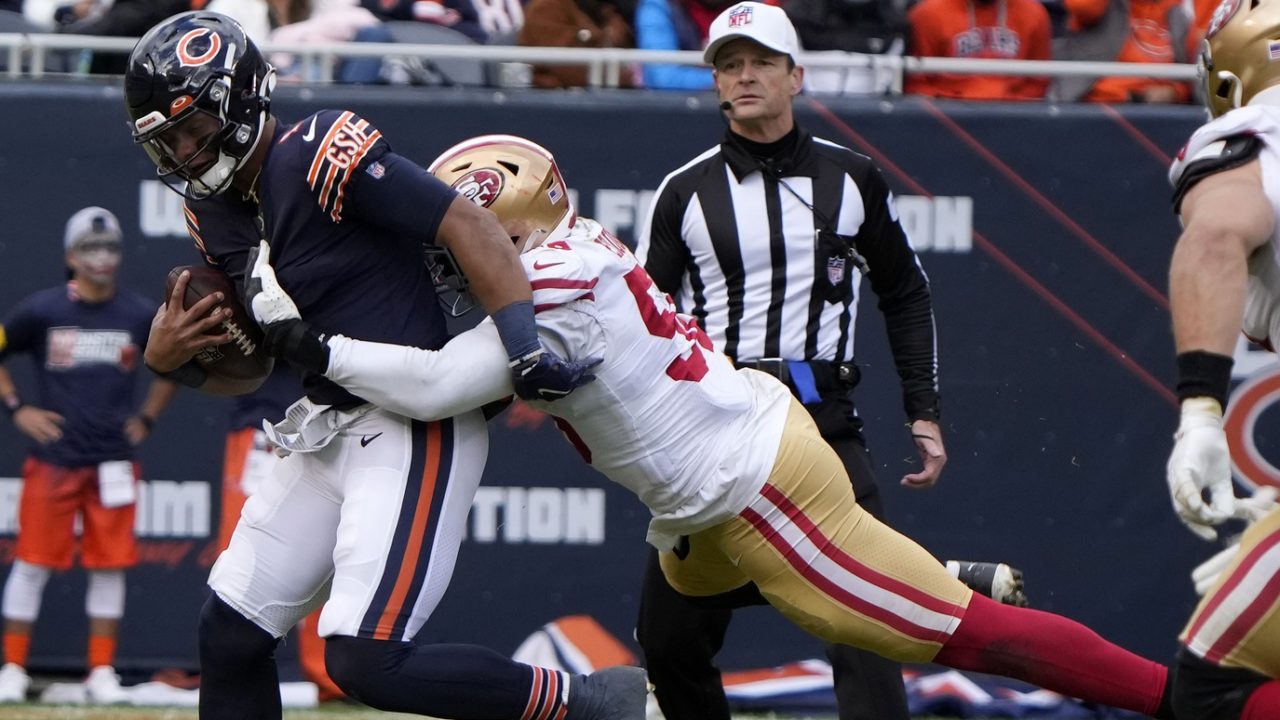 Steelers Scouting Report: What to Expect From the Chicago Bears

The week following Halloween weekend has been a very joyful and optimistic one for Pittsburgh Steelers fans. The Steelers are currently on a three-game winning streak; most recently a huge road win over their AFC North rival Cleveland Browns.

While the past few weeks have provided a lot of hope, it is still best to not get too ahead of ourselves as there is still a lot of football left to be played. This week brings a clean slate with a new opponent. Pittsburgh will be back at home on Monday Night Football for a primetime matchup with the Chicago Bears.

Chicago is coming off of a tough loss to the San Francisco 49ers and is trying to give their season some new life as the Steelers try to keep their hot streak going. With that being said, let’s take a look at this week’s opponent.

Unfortunately, for the Bears, they have some major injuries to take into consideration when discussing this game. On offense, they will already be without their top two running backs in David Montgomery (knee) and Tarik Cohen (ACL). Montgomery is on the Injured Reserve while Cohen is on the Physically Unable to Perform list. Chicago will also be without rookie offensive tackle Teven Jenkins who was placed on the IR with a back injury in the early stages of the season. They also look to likely be without another running back in Damien Williams due to a knee injury as he did not practice on Friday. Wide receiver Darnell Mooney‘s availability is in question due to a groin injury which left him limited in Friday’s practice.

On defense, Chicago could be without three key pieces in outside linebacker Khalil Mack (foot), free safety Eddie Jackson (hamstring), and inside linebacker Alec Ogletree (ankle), who all missed Friday’s practice. This defense will already be without strong safety Deon Bush who was placed on the IR with an injury to his quadriceps.

The Chicago Bears took a very unfortunate hit to their offensive success when they lost Montgomery, their star running back, to a knee injury that will sideline him until at least next week. To make matters worse, his backups, Cohen and Williams, also suffered injuries to put them on the sideline.

While these are all tough injuries, the good thing is that rookie running back Khalil Herbert has stepped up in a huge way to lead their rushing attack. Herbert has been outstanding in his new expanded role in the offense, carrying the ball 81 times for 351 yards and a touchdown on the season.

This week, Herbert will likely be carrying most of the workload once again and will be facing a solid Steelers front seven led by early All-Pro candidate Cameron Heyward. The Steelers currently rank 12th in the league in rushing defense, allowing 106 rushing yards per game and only three rushing touchdowns so far. While Heyward has been phenomenal, the Steelers are still looking for someone to step up alongside him on the defensive line while they anxiously await the return of Stephon Tuitt.

While the Bears’ run game has shown some promise, the same can’t be said about their passing attack for the most part. The Bears have lacked a true franchise quarterback for years and hoped to have found their guy in this year’s first-round pick, Justin Fields. Unfortunately, Fields has struggled in the early stages of his rookie campaign.

So far, Fields has thrown for only 991 yards with three touchdowns and seven interceptions. However, he showed some big play ability with his ability to escape the pocket last week, so that could be something to watch. With Fields’ woes, their star wide receiver, Allen Robinson, has been disappointing as well, catching only 26 passes for 271 yards and one touchdown through eight games. Robinson will be joined in the passing attack by this year’s leading receiver, Darnell Mooney, along with receivers Marquise Goodwin and Damiere Byrd, and two reliable tight ends in Cole Kmet and Jimmy Graham.

Fields will be facing a Steelers secondary that has been about average this season. Pittsburgh ranks 13th in the NFL in passing defense, allowing 239.7 yards per game and eleven touchdowns while only coming away with two interceptions so far.

However, the Bears will need to worry about a very dangerous Steelers pass rush, led by my early favorite to win Defensive Player of the Year, T.J. Watt, who has 8.5 sacks in the six games he’s played in.

Chicago looks to get defensive mindset back

Throughout the history of their franchise, the Chicago Bears have been known for having a very tough defense. While they haven’t been the worst defense in the league, they have strayed away from that identity some this season. The Bears are currently 14th in the league in total defense, allowing 375.5 yards per game and 24.4 points per game this season.

The strength of this defense so far has been against the pass. Chicago ranks 11th in the NFL in passing defense, allowing 232.5 passing yards per game and 14 passing touchdowns while coming away with four interceptions. A lot of their success against the pass can be credited to putting pressure on opposing quarterbacks. The Bears are currently fourth in the league with 21 total sacks on the season, led by six from starting outside linebacker Khalil Mack.

Their secondary will be taking a huge hit if star free safety Eddie Jackson is not able to play. If he is out, Marqui Christian will step in for him with Teez Tabor likely rotating in and Tashaun Gipson starting at strong safety. Jaylon Johnson and Kindle Vildor will be the starting corners. It will be interesting to see if former Pittsburgh first-round pick, Artie Burns, will see much action in the rotation at corner.

This week they will be facing a Steelers offense that has been starting to establish themselves the past couple weeks after a rough start. It will be interesting to see if this young Steelers’ offensive line can continue to improve against this the impressive Chicago pass rush and keep quarterback Ben Roethlisberger on his feet. Another thing to watch is if Roethlisberger can finally get wide receiver Chase Claypool going this season as he has already established a very strong connection with Diontae Johnson and rookie tight end Pat Freiermuth but could definitely benefit from getting another option involved.

While they have been successful against the pass, the same can not be said for the Bears’ run defense. They are currently sitting at 24th in the league in rushing defense, allowing 125 rushing yards per game and eight rushing touchdowns on the year.

Their front seven has been led this season by Roquan Smith at inside linebacker who leads the team with 81 total tackles. He will be joined in the linebacker core by Alec Ogletree on the inside with Mack and Robert Quinn on the outside. If Ogletree can’t go, they have a reliable veteran in Danny Trevathan to step in while Mack will be replaced up by Trevis Gipson if sidelined. In front of them, their defensive line will consist of Akiem Hicks at defensive tackle, Eddie Goldman at nose, and Bilal Nichols at end.

This group will be facing a tough task on Monday night as they will be facing a star in the making coming out of the Pittsburgh backfield. While it took a while to get this run game going, the offensive line has shown strides, helping rookie running back Najee Harris shine. Harris has rushed for 479 yards and three touchdowns on 128 carries so far. His strong play in the past few weeks was enough for Harris to be named NFL Offensive Rookie of the Month for October.

Like I mentioned, the Steelers got off to a rough start to the season but have seen their luck change tremendously the past few weeks. Fortunately for them, their remaining schedule looks to be very much in their favor, starting with this game. The key in this game is to contain Fields in the pocket and limit any type of big play opportunities. Unfortunately for Fields, he has not seen a pass rush like that of T.J. Watt and doesn’t have an offensive line suited to stop him. I see this being a multiple sack game for Watt and will be joined by at least one from Alex Highsmith off the other edge. Herbert has been solid for the Bear rushing attack and might break for a couple decent runs but he won’t be enough in this one.

Offensively, this has all the signs of being a special game for Najee Harris. This Bears defense has struggled tremendously at stopping the run this season and to make matters worse, could be missing some starters. Even with those said starters, I’m predicting Harris to rush for over 100 yards with a pair of touchdowns.

At the end of the day, it’s a home, primetime matchup for the Steelers and they are simply the better team across the board. I don’t think Fields is ready for the spotlight and that will hurt the Bears tremendously. I have the Steelers pulling away and winning this one 31-13. With this game and the Lions next week, I think it’s safe to say we could be very easily looking at a red hot 6-3 Steelers team heading into a huge road game against the Los Angeles Chargers.