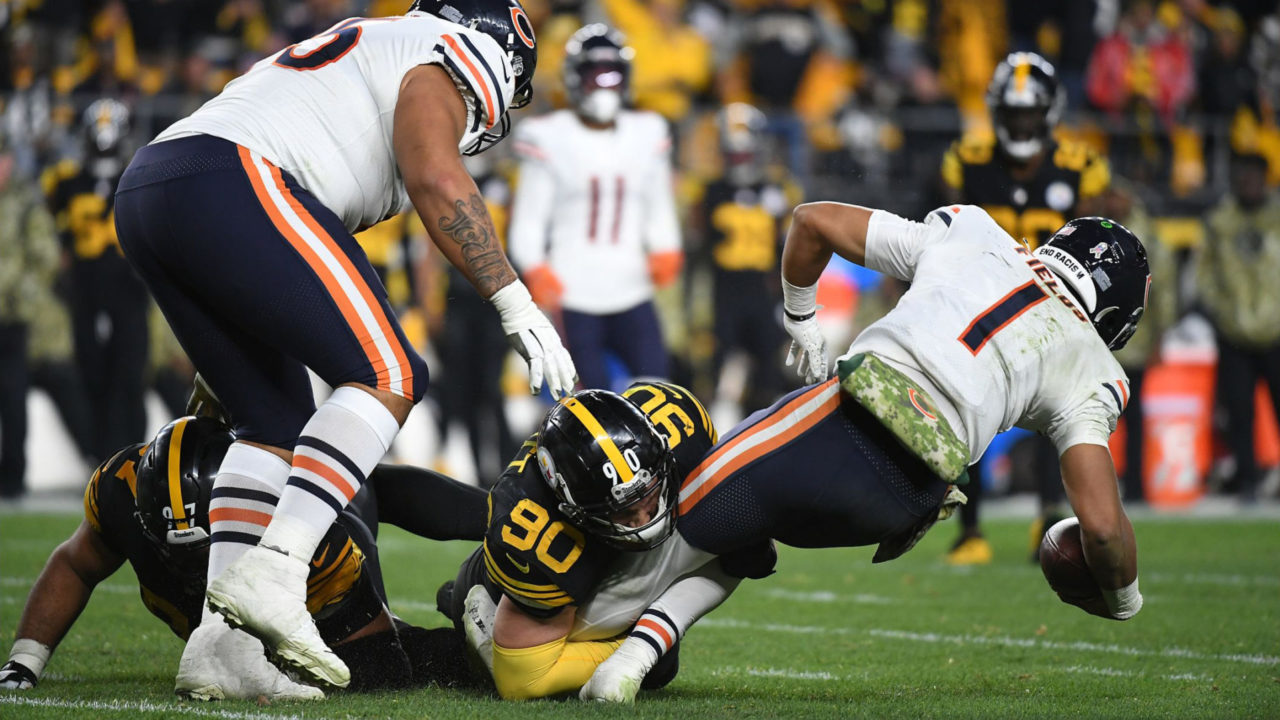 I was nervously excited early on Sunday in anticipation of what looked to be a good week of NFL football. When teams highly expected to win started dropping the ball, literally, it made waiting for Monday Night Football between the Pittsburgh Steelers and Chicago Bears a tad more stressful. The energy looked good as the Steelers warmed up and got ready for kickoff. Unfortunately, the anxious feelings that I’d set aside as paranoia came rushing back after conservative first-half play by Pittsburgh allowed Chicago to creep back into contention in the fourth quarter, at home, in front of a national audience.

Fortunately, the Steelers were able to wrangle a 29-27 win, but my takeaways are a mixed bag this week.

Two steps forward, one step back

The Steelers have a consistency issue along their offensive front that was evident in how the game progressed against the Bears. The young offensive line who actually had one particularly great protection play found themselves being overpowered several times by a Chicago defense that was without Khalil Mack. Too many times, the offensive line allowed themselves to be pushed backward, losing the chess match that is controlling the line of scrimmage. Akiem Hicks, Roquan Smith, and Eddie Goldman took advantage by being highly disruptive. It limited Najee Harris‘ productivity in the second half of the game. It is also something the team can improve ahead of their game this coming Sunday against the Detroit Lions.

On defense, there appeared to be a lag in discipline to assignments. Whether that was due to game-planning or a shift that the Bears made to attack the seams – and then the outside one-on-one matchups – when they’d been frustrated the entire first half of the game offensively. Outside of the front pressure along the defensive line and outside linebackers, Pittsburgh looked like they’d been lulled into sleep in the third quarter. It caught up with them when, in the fourth quarter, Chicago capitalized on a special team’s takeaway for a score and then changed pace with Justin Fields running a spread offense.

If aggressive play is ‘the standard’, stick with it

This isn’t a criticism of the Steelers’ coaching staff, but if they’ve set the standard – as they’ve said multiple times this season – of being aggressive in how they approach opponents, they really need to stick with that standard. Pittsburgh had the tools in place to not only start aggressively, which they did by setting up great blocking to get Harris into the end zone early and then two big touchdown plays that involved Pat Freiermuth. Ben Roethlisberger fed Chase Claypool a couple of combat-catch opportunities.

Defensively, T.J. Watt was on fire (not unusual) with 3.0 sacks and there were plenty of good things to say about Cameron Heyward, James Pierre (and his forced fumble on a special teams play), Isaiah Buggs, and Minkah Fitzpatrick.

The issue I had on Monday night was that the Steelers did not appear to maintain their aggression on the field. That is, in part, a coaching issue. If Pittsburgh wants to truly remain competitive, they can’t allow themselves to get complacent or rest on their heels; they need to maintain the standard for a full 60 minutes.

It’s clear that the team has found an identity on both sides of the ball, at last. Roethlisberger looks comfortable with rookies Freiermuth and Harris. The offense looks better but could still use some fine-tuning. The same could be said for the defensive backfield. There are a lot of moving parts and by Week 9 of an NFL regular season, barring major injuries that disrupt everything, a team typically knows what it is and what needs dialed-in.

Monday night’s game should be utilized heavily moving forward for this Steelers squad in how to do just that: adjust, tune, and get on the same frequency for a tough second half of the season.

The officiating was horrendous for a primetime NFL game. Tony Corrente and his crew were embarrassing. Plain and simple. Yes, there were some questionable fouls that did get called. Yes, there were some fouls that went completely ignored, for the most part. Was Fields hit late? At least one play looked like it was a 50/50 call that he was. Was the Bears’ offensive line taking early steps before the snap? Video doesn’t lie. Fans can complain all they want that a fix was in, but officiating has been awful for every single team this season (and most of last season).

Nearly as awful was the completely insane commentary from the ESPN analysts. No one needed nearly one entire quarter of nothing but Harris’ life story and his family’s tough situations. The fact that ESPN didn’t even get what they said correct, now that is just plain shameful. It drew the following response from Harris on Twitter:

Bra I ain’t sleep on no dam floor in college. I slept on my bed

The fact that Cassius Marsh drew a taunting penalty that really shot his current Bears team in the foot was discussed as a strange call by ESPN commentators. Let’s address this last issue in an intelligent way. First, Marsh did spend time with the Steelers before he joined the Bears. The ESPN broadcast did not show fans at home what SCU’s Joe Kuzma called a “Chuck Norris” roundhouse kick following his sack of Roethlisberger, however; they showed Marsh standing in rigid form staring at the Pittsburgh sideline.

Had Marsh run towards his own sideline to do a relatively decent karate-style kick that had him airborne in celebration, he may have been ignored. The kick, though, was egregious and was followed by intentional movement towards the opposing sideline. This was a foul that Corrente and company got correct, once you get the full image of what actually happened instead of ESPN‘s poor coverage and commentary.