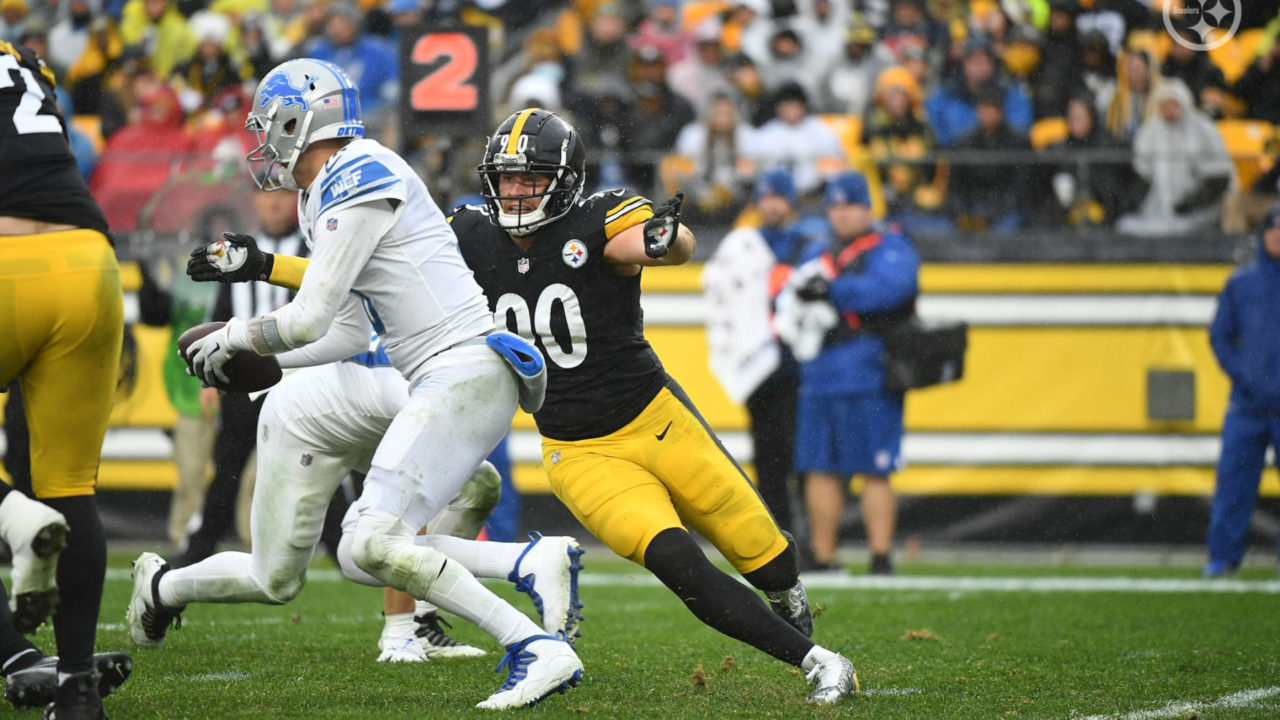 Sunday’s game at Heinz Field, with the Pittsburgh Steelers hosting the Detroit Lions was bound to be a stinker; the Lions had a 0-8 record entering the matchup and the Steelers had an ugly game with another NFC North team in the Chicago Bears just last week. In the cold, rainy conditions, who’d have thought the turf would end up being the most talked-about broadcast topic during an NFL game that resulted in a miserable 16-16 tie?

Two words can sum up the final result for the Steelers: Dumpster fire.

The result of the game can’t be placed on the shoulders of Mason Rudolph. Although the Steelers’ backup quarterback threw a few balls, including an interception, with too much zip or off target, Rudolph actually utilized the field outside of the pocket. He had a couple of nice bootlegs, and the use of his feet to gain a big chunk play on the “keeper” showed better awareness than many of his previous games. Yes, he missed on some plays. Overall, he’s not the starter and likely would not have been on Sunday had Ben Roethlisberger not been on the COVID-19 protocol. Practice tempo doesn’t equal in-game tempo, even on the best of days.

You could blame the miserable weather conditions for playing its part in the number of injuries the Steelers, and Lions for that matter, suffered in this game. Both teams lost key players to the sidelines and were required to sub-in personnel as a result. Even if a wet and torn-up Heinz Field turf did contribute, it wasn’t the primary issue despite how often it was mentioned on Sunday.

Many fans started calling for every member of the coaching staff to be removed. This has become a typical response whenever adverse situations have risen. It’s reactive. It’s purely based on emotional response. Players must execute the game plan regardless of injuries, adjustments, changes in in-game conditions. No fan enjoys watching their team fizzle out like a dud firecracker, especially against an opponent that has rarely showed much of a spark all season to that point.

The officials. Not. That. Fabulous. It’s the NFL. There’s no longer any question that officiating is a mess across the board so it can’t be used as an excuse.

Ultimately, the primary reason the game ended in a tie was due to mistakes that led to a miserable outcome.

Sloppy play was the biggest contributor to misery

The Steelers have played some ugly football this season, and Week 10 – the start of the second half of the 2021 NFL regular season – could not have gone much worse than it did. You’d almost think no one had ever played football outdoors with the poor management of the ball frequent stars, like Diontae Johnson and Pat Freiermuth, were guilty of. Securing the football is a fundamental.

The Lions took advantage of very poor gap management by the Steelers defense to run roughshod over them and were late to adjust. Detroit was running the ball downhill, something Pittsburgh utilizes offensively and  should recognize from practices. Najee Harris has primarily been that type of back, with a twist, in Matt Canada’s offensive scheme. Harris, though, is a much more elusive ball carrier. Had the Lions had Harris on their side, this game wouldn’t have been a tie but a win… Detroit’s first this season.

Poor tackling, on special teams coverage and defense, nullified possessions where Pittsburgh was able to shut down Detroit on three-and-outs in other series’ or create good field position. If the field surface is too much to handle, the opponents shouldn’t be able to return the ball well enough that Pressley Harvin, the punter, has to make the stop, right?

It wasn’t all bad

There were some really good individual performances that, had the entire team taken advantage of, could have given Pittsburgh the win. Cameron Heyward continues to give more than 100 percent and picked himself up out of the mud more than once. Terrell Edmunds had a couple of really nice tackles.

Getting away from handing the ball off on offense was poor judgement, in my opinion, as it became more and more clear that the receivers were having issues bringing passes into their bodies securely. Harris was no where near a carry limit, which is encouraging since the rookie has been a workhorse all season and doesn’t look like minds it one bit.

Had the Steelers decided to go for a potentially game-winning field goal in overtime and converted, they’d be getting some love. The fact that they allowed conditions to dictate their fate, though, made for nothing short of a miserable disappointment.