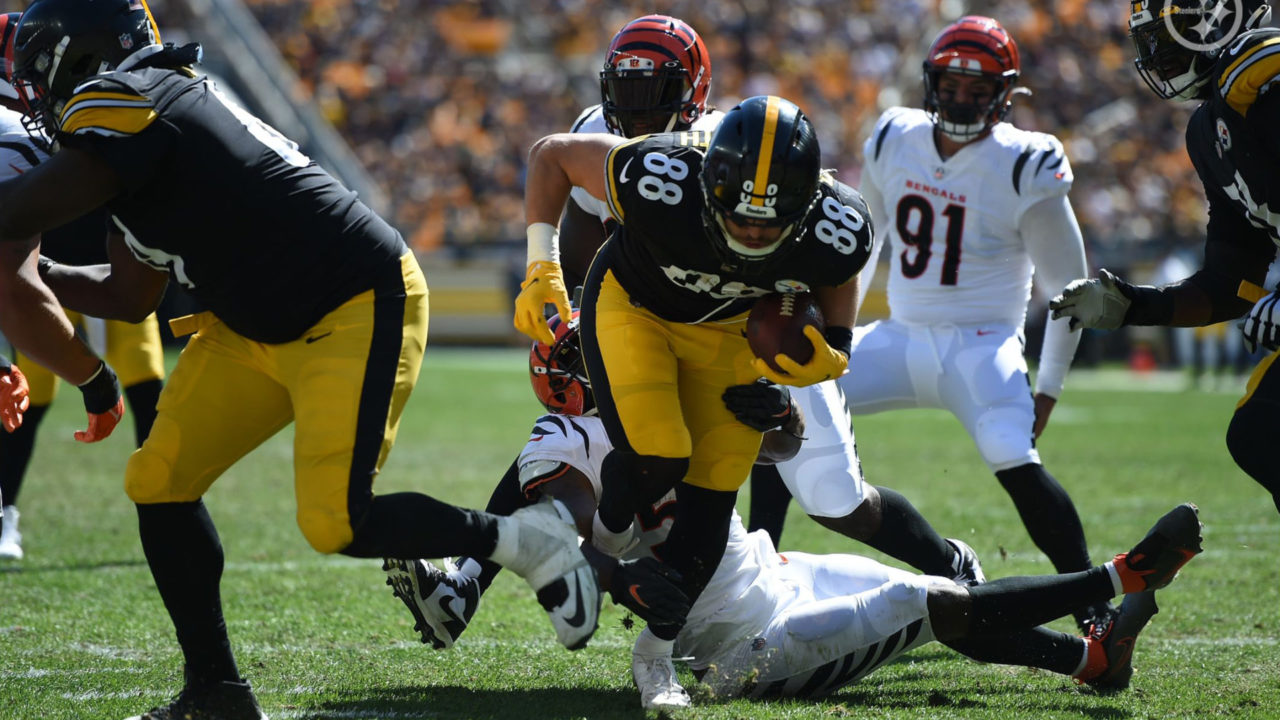 Steelers Scouting Report: What to expect from the Cincinnati Bengals

This past Sunday was a tough one for Pittsburgh Steelers fans. We all saw our team fight hard from behind just to fall short in the end to the Los Angeles Chargers. While that was a very hard loss, this fanbase has plenty to still be thankful for this holiday weekend as the Steelers have another big opportunity ahead of them this Sunday.

This weekend, they will be traveling to Cincinnati to seek revenge to their loss at home earlier this season to the Cincinnati Bengals. As both teams are very much in the picture in the AFC North, this is a very big game.

With that in mind, let’s take a deeper look at this week’s opponent.

At this point in the season, the Bengals are a team that is lucky to not have a ton of injuries to be concerned with. Most of their injuries are on defense that they have already been dealing with.

This weekend they will be without linebackers Akeem Davis-Gaither (foot) and Jordan Evans (knee), defensive ends Wyatt Hubert (pectoral) and Joseph Ossai (knee), and cornerback Trae Waynes (hamstring), as they are all on the Injured Reserve list.

On offense, wide receiver Auden Tate is listed as doubtful with a thigh injury.

As we have all seen, this has been a very different Cincinnati Bengals offense this year. This can be contributed in large part to the health and success of their second-year quarterback Joe Burrow. He is currently tenth in the NFL in passing with 2,645 yards for 21 touchdowns and eleven interceptions.

His success is in large part due to his former college teammate, rookie wide receiver Ja’Marr Chase.

Chase is not only the best rookie wide receiver this year but also one of the top at his position in the entire league, sitting at sixth in the NFL in receiving with 47 catches for 867 yards and eight touchdowns. Chase will be joined in the passing attack by two other very reliable wide receivers in Tee Higgins and Tyler Boyd along with tight end C.J. Uzomah.

This week, Burrow will be facing a Steelers secondary that has been struggling through injuries lately. They currently rank 14th in the league in passing defense, allowing 240.7 yards per game and 15 passing touchdowns while only coming away with four interceptions. Luckily for the Steeler, free safety Minkah Fitzpatrick has been activated off the COVID-19 list.

Cornerback Joe Haden also looks to be trending in the right direction as he was able to practice on Friday with his foot injury. In other good news for this passing defense, outside linebacker T.J. Watt was a full participant in Friday’s practice while dealing with his hip and knee injuries. If Watt is able to play Sunday (as it appears he will) it will provide a huge boost for this defense against a mediocre Bengals offensive line.

While the Bengals have looked great passing the ball, they have found a ton of success on the ground as well.

Starting running back Joe Mixon is having a great season so far as he is fourth in the NFL with 180 carries for 759 yards and nine touchdowns.

This will be a huge matchup to watch this week as Pittsburgh has one of the worst run defenses in the entire league. The Steelers currently sit at 27th in the NFL against the run, allowing 126.6 rushing yards per game and eight rushing touchdowns so far. This front seven has to have someone else step up if they want to have any success as defensive lineman Cameron Heyward is having an amazing season but can’t do it all on his own.

Bengals are still average at best on defense

While they aren’t one of the worst defenses in the league like they have been in the past, the Bengals still don’t seem to be a team that will strike fear in opponents on that side of the ball. They are currently 15th in the league in total defense, allowing 352.9 total yards per game and 21.6 points per game.

The strength of Cincinnati’s defense is against the run. They are sixth in the NFL in run defense, allowing 98 rushing yards per game and nine rushing touchdowns this season.

Their front seven is led by linebacker Logan Wilson who leads the team with 83 tackles and also has a team-high four interceptions. Wilson will be joined at linebacker by Germaine Pratt with Markus Bailey and Joe Bachie seeing some time in the rotation.

In front of them, the defensive line will be led by newly acquired defensive end Trey Hendrickson who will be joined by Sam Hubbard at the other end along with D.J. Reader at nose and Larry Ogunjobi at tackle. B.J. Hill will also see some time on the defensive interior.

This group will be facing a tough task this weekend as they will be facing a rising star in Pittsburgh’s rookie running back, Najee Harris. The rookie is seventh in the league in rushing with 188 carries for 685 yards and five touchdowns. Hopefully this Steelers offensive line shows up to play so that Harris can continue to show why they spend their first round pick on him.

While they have been very solid against the run, the same cannot be said for this against the pass.

The Bengals are 24th in the league in passing defense, allowing 254.9 passing yards per game and 13 passing touchdowns while coming away with eight interceptions.

Their secondary is led by one of the best safeties in the league in Jessie Bates III who will be joined on the back end by Vonn Bell. To complete the secondary, Chidobe Awuzie and Eli Apple will start at corner with former Steeler Mike Hilton at nickel. Darius Phillips and Tre Flowers will also see some time at corner.

This week they will be facing a Steelers passing game that has shown some strides after their rough start. Although they lost the game, quarterback Ben Roethlisberger had his best game of the season against the Chargers after not practicing all week, throwing for 273 yards and three touchdowns.

Hopefully, Roethlisberger can keep his dangerous connection with receiver Diontae Johnson going while also getting some other guys involved this week.

Make no mistake about it, this is one of the biggest remaining games of the season. As I have already mentioned, both teams are very much in the hunt for the division so this game will play a big part in the playoff picture. The last time these two teams saw each other, they were two different teams. The Bengals were off to a hot start while the Steelers were still trying to find themselves.

With that in mind, I believe this Steelers team has begun to find their identity which makes me think this is going to be a different outcome. This will be a very close game as Burrow, Chase, and company will make some plays to keep them in it.

However, I see this being another huge game for “Big Ben” against a weak Cincinnati secondary.

I have Roethlisberger throwing for over 300 yards with three touchdowns in what could be his last game against the Bengals, leading the Steelers to a 31-21 victory.