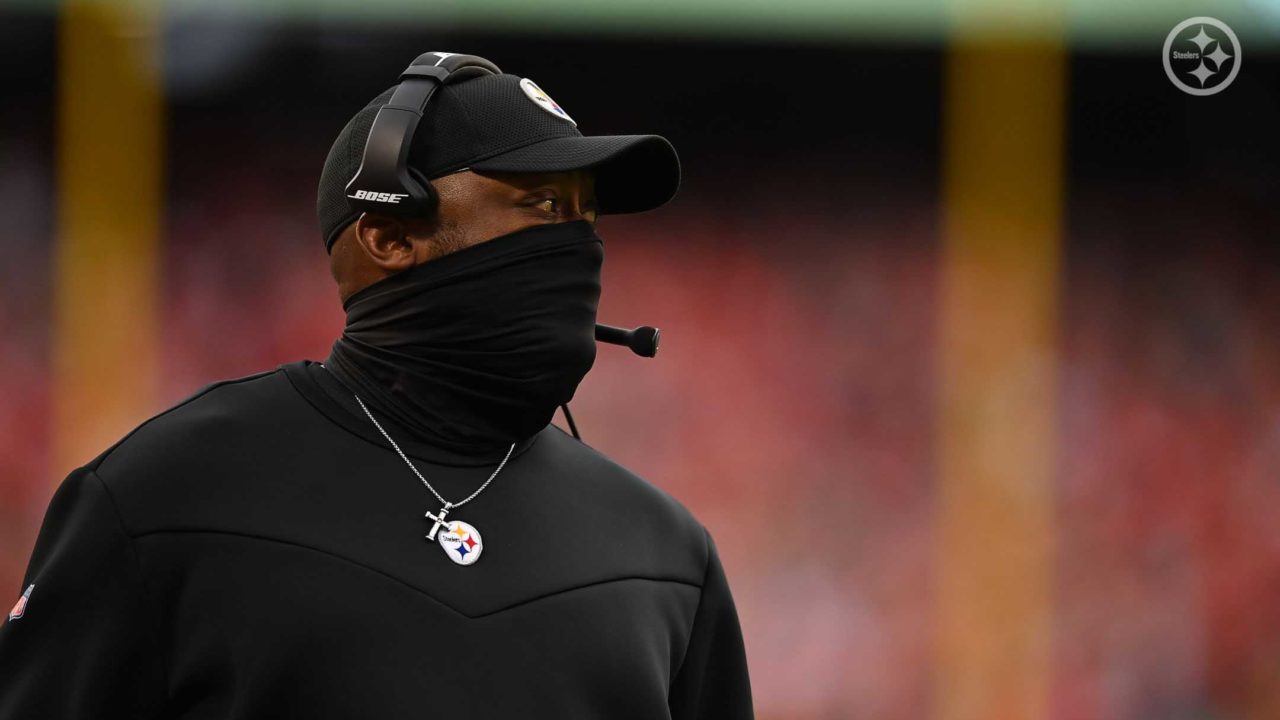 Fire everyone! Even if it’s not really their fault.

That’s the sentiment everywhere I look around this week. But it’s an entirely flawed concept and here’s why.

Hey, he’s the GM. The man responsible for designing the roster. How can you keep this guy? Just look at this team!

The people saying this aren’t looking at the team and that’s the problem with the criticism.

Backtrack to March 2021. The Steelers are asking Ben Roethlisberger to take a pay cut because they’re way over the cap – and they’re way over, because the cap reduced in size due to the 2020 season which barely saw fans in a majority of the NFL’s stadiums.

If you don’t think that had an impact in the Steelers ability to re-sign free agents such as Bud Dupree or Mike Hilton, I’m not sure what to tell you.

Truth is, I don’t believe they make a play at Hilton whatsoever, and still bring back Cameron Sutton. But by doing so, they tick off Steven Nelson and end up sending him packing with one year remaining on his contract. Vince Williams, a long-time starter at inside linebacker, was also caught in the crossfire of cap hell, being released, re-signed, and ultimately deciding to retire right as training camp started.

I bet the Steelers were interested in retaining OG Matt Feiler as well, but couldn’t pony up the cash to keep him either. They get blindsided by losing their other guard, a perennial All-Pro, David DeCastro, just as camp broke as well.

This is already in addition to Maurkice Pouncey retiring early – none of the above being moves they could anticipate or prepare for with prior drafts, or brace for with no cap space.

That leaves the draft and people complaining that Colbert has blown it with draft picks. Conveniently everyone forgets they wanted James Conner gone and Najee Harris here, both of which happened. Hindsight begs for more offensive linemen in lieu of the running back, or Pat Freiermuth – forget that the linemen available probably don’t play or play any better than what they have now.

And without Freiermuth? The Steelers likely lose another game or two where he makes incredible catches.

By the way, that 2017 draft class is why they couldn’t keep Conner, seeing as T.J. Watt, JuJu Smith-Schuster and Cam Sutton were all taken the same year and had contracts expiring.

Colbert made shrewd trades and additions, including adding Joe Schobert and Ahkello Witherspoon.

As it stands, last year’s defense had even more replacements than just for Dupree, Nelson, Hilton and Williams, as Stephon Tuitt never got on the field and Tyson Alualu played 2-3 snaps into the second game of the season before landing on IR.

Furthermore, Watt has missed 2 entire games and large portions of three others, Bush has missed two, Minkah Fitzpatrick and Sutton one each, and Joe Haden five altogether. Even reserve defensive linemen have missed time, such as Chris Wormley, Isaiah Buggs, Carlos Davis, and rookie Isaiahh Loudermilk.

Remember when Jamir Jones and James Pierre were camp phenoms destined for greatness too?

And yes, I’m glossing over Melvin Ingram’s whopping five solo tackles and lonely single sack, as his successors have been able to easily accumulate those great performances.

In short, the Steelers offensive line took more hits this offseason than anticipated – and more in season going down to their fifth starting left guard (John Leglue). The defense hasn’t been at full strength and has half of its depth chart relying on players who weren’t around last season too.

Put yourself in Colbert’s shoes: can you do a better job? (I think not.)

Tomlin hasn’t won a playoff game in X years or look at his postseason record… yeah yeah, look at everyone else’s records too!

Bruce Arians, without Tom Brady, had a single playoff win in seven seasons as a head coach – missing the playoffs in four of those seven. Arians, often remarked upon as someone the Steelers should’ve kept, was responsible for Ben Roethlisberger being sacked 215 times in five seasons as the team’s offensive coordinator.

Does Arians call the plays? Weren’t the Bucs in disarray at 7-5 going into their bye week, with Tom Brady flustered with the offense?

Well, if that’s so, why is Arians, or his OC, Byron Leftwich, the ones people want to replace Tomlin?

Ditto for Eric Bieniemy, who isn’t holding the Waffle House menu of play calls that Andy Reid – another former “failed” coach – does.

Truthfully, if Tomlin isn’t here, the Steelers are probably a 2–3-win team. People won’t agree, they’ll just complain that players use Tik Tok in their off time instead of boozing it up and smoking cigars (often on the sidelines) like their heroes of yesteryear. (And don’t get me started on Cowher’s guys taking a trip to Las Vegas, with a Hall of Famer getting in a wrestling ring on the same trip!)

The amount of disrespect he gets for working with the above-mentioned roster chaos is mindboggling… which for reference, he didn’t squander talent either, when Big Ben, Antonio Brown, Le’Veon Bell, and Martavis Bryant played all of one playoff game together. (And the other that had the first three Killer B’s? Yeah, that team went to the AFC Championship game.)

Let Ben run his own plays!

Good Lord, we heard this with Todd Haley, Randy Fichtner and now, Matt Canada, as the offensive coordinator.

The play book is Canada’s. Ben isn’t drawing plays in the dirt with his finger – he doesn’t even have enough play clock time to do so.

But he does execute a hurry-up offense well – always has. Is that because the other team can’t substitute and Roethlisberger picks apart mismatches? Are Canada’s plays (and play calling) so bad that it causes interceptions, fumbles, or missed blocks?

I think there’s a mix of everything from OC to QB to OL that’s made a mess of the Steelers offense and there’s no one person to blame.

No OC is perfect. I remember these same arguments when Haley joined the organization in 2012. It took a season or two to refine, and then it was lights out. Patience doesn’t exist in the present era, not with teams and not with the fans. But its required for things to gel and for the proper players to be in place for proper execution.

(Note: we heard all of yinz wanted Canada to takeover for Fichtner last season too. Can you make up your minds?)

In case you didn’t read the notes above already, those are six of the eleven defensive starters replaced in 2021. Two of those weren’t accounted for with injuries, and losing Watt and Haden for extended time hit the depth chart even worse.

Yet, the Steelers are still among the league’s leaders in sacks.

And yes, the run defense is horrid.

When you’re relying on Taco Charlton and Derek Tuszka as your edge defenders, James Pierre as a starting cornerback, or giving healthy playing time to fifth and seventh round rookies (Lowdermilk, Tre Norwood), what do you expect?

The Steelers D looks more like the ones you saw in the preseason than last season. That’s a larger issue than simply coaching: the talent isn’t available, and what few players you may look to for having a high ceiling, as in draft picks, are all on the field already.

It sucks, but that’s the reality of it. You can’t have depth when the depth is already replacing established players for one reason or another.

It also doesn’t help that the offense generates all of a three-and-out, putting the defense back on the field with no rest!

Adrian Klemm’s departure looks bad on paper. The timing, on the pro side of things, is him leaving before the Steelers season is over.

It looks even worse that he’s the position coach for the worst position group on the field: the offensive line.

The fan reaction, however, is unwarranted. Klemm could be the most amazing coach on Planet Earth – not that I’m saying that – but what do you expect from the o-line group after losing four of five starters from 2020?

The other portion of the story is simple: coaches are nomads. They change jobs. Frequently.

I see this dumb narrative about how Klemm is being offered more at Oregon and that means the Steelers are cheap or don’t invest in their coordinators. If that isn’t the dumbest thing I’ve heard in a while… Klemm’s raise is pursuant to wearing more hats with his new college job, including an assistant coaching role.

Anyone with an ambition to move up the ranks is going to jump back and forth from college to the NFL and vice versa. This is a career path for a young man with larger goals. Good for him, and also good for the Steelers for allowing him to move on – they could’ve just said no and trapped him in Pittsburgh.

Yes, the optics suck, but much like Mike Munchak, there’s way more to the story when a coach pursues another avenue in life.

Clean house with the assistants

For real folks, there’s still some assistant coaches that were around when Bill Cowher was the head coach – do you really think the Rooneys operate by cleaning the slate entirely and allowing someone else to bring in a whole new crew?

When Mike Tomlin took the helm in 2007, several Cowher hires remained on board.

Hiring a new coach likely means some of the same faces you’re complaining about right this moment go precisely nowhere even if Tomlin leaves. (So stop whining about it!)

No Tomlin assistant has been hired etc. for a head coaching job in the NFL.

People say that, believing that’s some indictment on this time in the league. It’s not. It’s also funny, especially after the ire Adrian Klemm received for moving on and up the chain (over in the college ranks).

The reason Tomlin’s staff doesn’t get promoted is because quite a few of them have already held either head coaching or coordinator positions around the league: Dick LeBeau, Todd Haley, Mike Munchak, and Teryl Austin to name a few.

Bruce Arians is the most famous one and he was retired in 2012 – so he doesn’t count. He also shouldn’t, if you consider his success has only come with Tom Brady. (See above.)

Keith Butler has waited to be the Steelers DC for ages behind Dick LeBeau too. If Butler wanted to pursue other avenues, don’t you think he would’ve done so since joining the Steelers in 2003?

It’s a really weak argument that gets worse when you actually look at who is on the staff and see they are more than content to stay where they are.