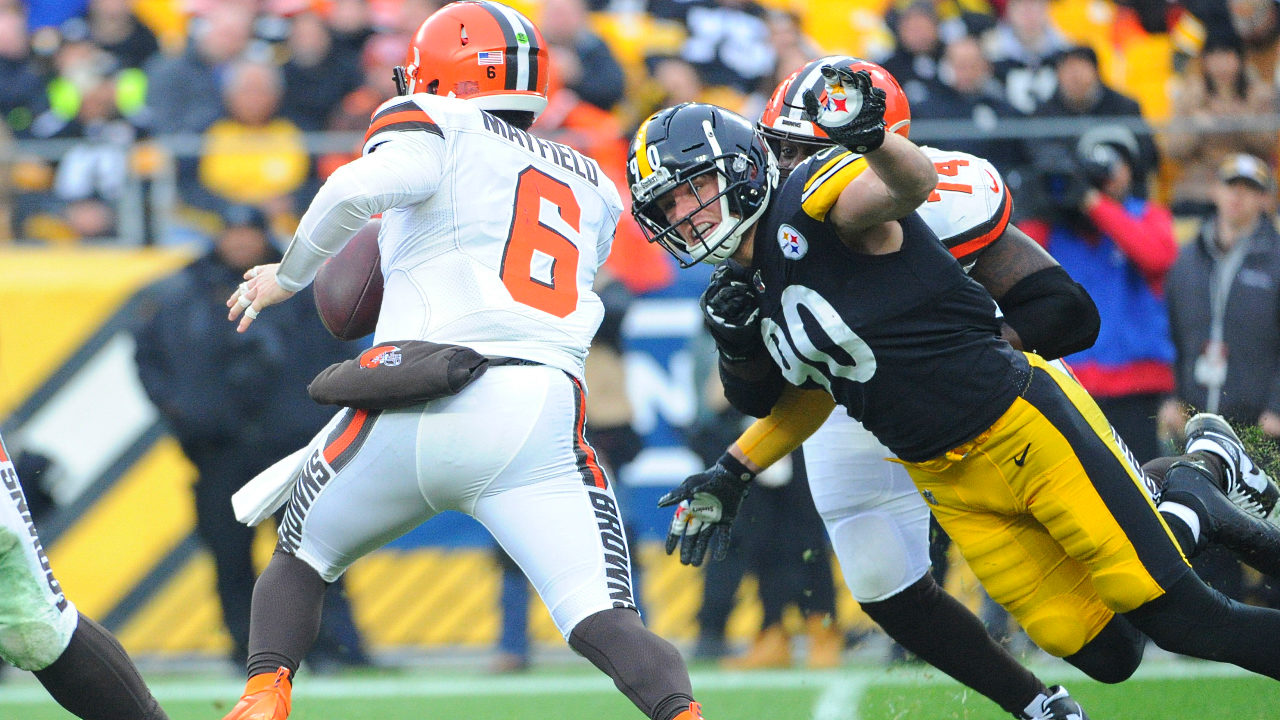 The 5: Steelers to watch in final home 2021 regular season game

As Week 17 approaches, there is quite a bit to talk about heading into the final game at Heinz Field this 2021 NFL regular season. Although all eyes, in-stadium and across Steelers Nation, will be on one veteran player, without a doubt, there are other Steelers to keep an eye on as Pittsburgh hosts the Cleveland Browns in a pivotal AFC North game that, once again, could determine who will be kings of the north and slip into the NFL playoffs.

When Ben Roethlisberger spoke to the media this week, it certainly sounded like the veteran was not speaking tongue-in-cheek about potentially hanging his cleats up for good after the 2021 NFL season. Barring playoff games, Monday Night Football may be the last time Steelers fans see “Big Ben” on the turf at Heinz Field.

Fans are already clamoring for tickets and planning a massive tailgate presence with a social media campaign in place for everyone to wear a No. 7 jersey in the stadium during the primetime game.

Roethlisberger has “owned” the Browns through the majority of his career. In 18 seasons, his record is 25-3-1 against Cleveland. That he would love to walk into the tunnel at Heinz Field with a win is a given. Steelers Nation worldwide would also love nothing more.

If this is truly the end of an era for @_BigBen7 – I personally wish him the best & thank him for some of the best @steelers performances I've been blessed to see. This season's not over & I hope the team can pull together 2 see it through successfully #HereWeGo No. 7 #HereWeGo pic.twitter.com/1ihhD68f0L

News that rookie tight end Pat Freiermuth has moved from concussion protocol to workouts bodes well for the Steelers offense. One way to eliminate the pass rush of Miles Garrett and Cleveland’s defensive front would be to utilize the slots and flat between the hashmarks.

The Browns defense currently ranks 19th in pass DVOA so far in 2021. Cleveland also ranks in the high middle of all NFL teams in fantasy points allowed to opposing tight ends. With Freiermuth on the field, Roethlisberger may have a safety valve that had been more and more reliable before the rookie suffered the head injury.

The defensive line in containment

The Steelers have struggled, at times this season, with handling both pass rushing and preventing the run. The Browns present a real challenge in that area, not just from their running backs but also from Baker Mayfield. Nick Chubb is no slacker in the Cleveland offense.

“We’d better work our tails off to minimize their run game and Nick Chubb.” – Mike Tomlin

Defensive end Chris Wormley is expected to return after missing last week’s game due to a groin injury. He’ll be a welcome addition for Cameron Heyward, as Isaiah Buggs will be replaced (due to being on COVID protocol) by Henry Mondeaux and Isaiahh Loudermilk.

“We understood that last time,” Coach Tomlin remarked about needing to contain the Browns despite their No. 30 rank in the league in preventing the run. “It’s going to be critical this time around, probably doubly so, and so we’re preparing with an edge.”

The Browns may be without Kareem Hunt (ankle) and are working J.C. Tretter (center) back from a knee injury. Mayfield is also dealing with a left shoulder injury that has kept him from being 100 percent.

Chris Morgan and the O-line

The team may know their newly-elevated offensive line coordinator as “C-Mo”, but how he has prepared the same players Adrian Klemm coached prior to leaving for Oregon will be something to watch.

“He was a lead line coach of the Atlanta Falcons for a number of years before he got here…I’m really excited about his elevation and the component that it could bring to us.” – Mike Tomlin

Center Kendrick Green will get an extra day of prep to see if the calf injury he sustained is serious enough to limit his availability Monday night. B.J. Finney is Green’s likely replacement if he can’t go.

There have been some brilliant moments in 2021 for Claypool. He’s shown an ability to come away with the ball in combat situations. Despite a bit of a sophomore slump, he is due for a breakout game.

With Diontae Johnson likely to draw heavier attention as the Steelers’ leading receiver, there’s room for more of a connection between Roethlisberger and Claypool. That connection will only be strengthened, though, if Claypool is reliable in controlling the ball and running efficient routes.

The Steelers offense needs someone to make the Browns pay for trying to shut down Najee Harris, too. If Claypool can make his presence known, convert critical downs, and earn at least a couple big, chunk plays, Pittsburgh can give Cleveland a real battle in front of a national crowd.