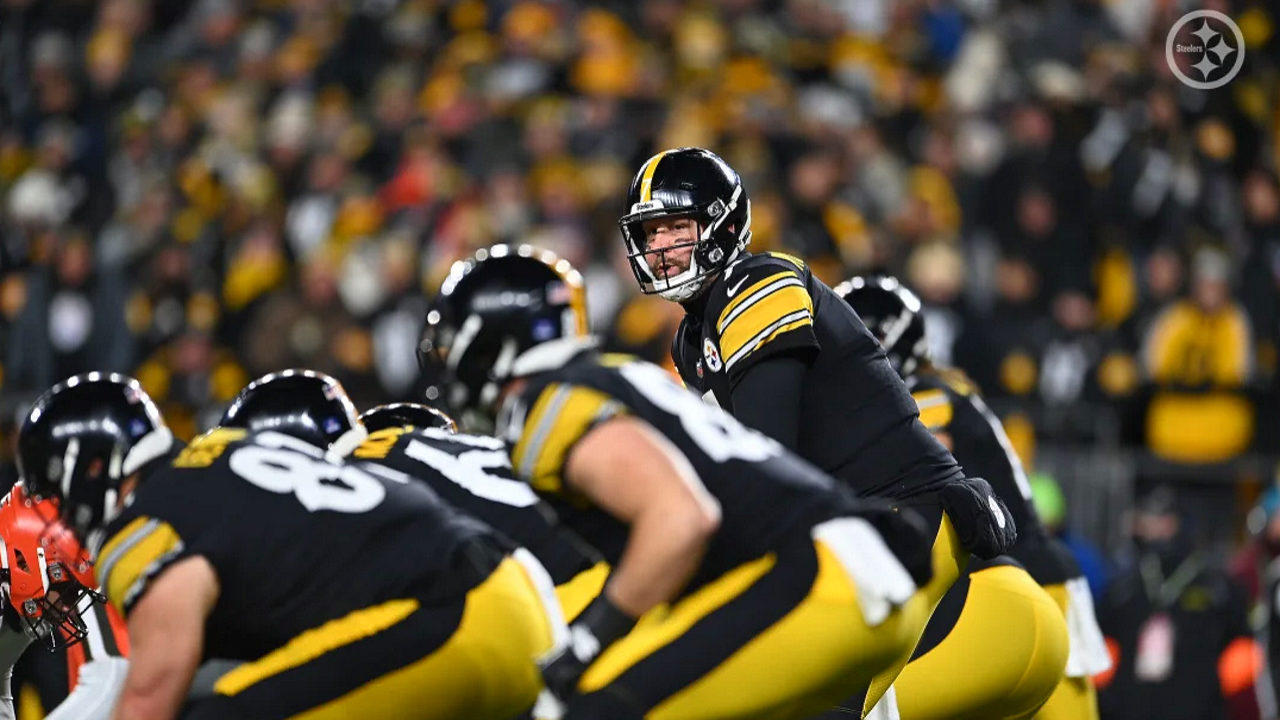 On a night that Pittsburgh Steelers fans were anticipating highly following the semi-announcement from their veteran quarterback that Monday Night Football was likely his last home game, Steelers Nation packed Heinz Field to try to share in the magic. Although several players in the black and gold deserved to win accolades for their play and the 26-14 win over the Cleveland Browns, it was impossible to not give Ben Roethlisberger the game ball.

Leading up to the game, there were hundreds – if not thousands – of well-wishes sent to “Big Ben” from former teammates, fellow NFL players, current teammates, fans, and even members of the media. Before kickoff even happened, it felt like the game was going to not just be memorable but historical.

Roethlisberger didn’t have a perfect outing in his home finale. He did, however, have better support from his offensive line in this game. That improvement allowed running back Najee Harris to keep moving the chains and ultimately win the game on a long run for a touchdown that the Browns seemingly weren’t expecting in the fourth quarter.

On a night that saw T.J. Watt grab sack after sack, a lot of fans would probably have picked the potential NFL Defensive Player of the Year for the game ball if it weren’t for the fact that for the last 18 years, all they’ve known is Roethlisberger running the Steelers’ offense. And on a national stage that has become international, as the NFL has expanded globally, their eyes were on whether “Big Ben” would be able to find enough of the magic he began with in Pittsburgh to grab a win over a Browns team that had already been eliminated from the 2021 NFL playoff picture.

Monday night’s game was one of the better games of the season in how the team rallied together in all facets to secure the victory.

The defense haunted Baker Mayfield all night long as the Browns, for some reason, stopped feeding Nick Chubb and attempted to beat the Steelers with the passing game. Ultimately, the pressure from Watt, Alex Highsmith, Isaiahh Loudermilk, Cameron Heyward, Henry Mondeaux, and others up front led to an Ahkello Witherspoon interception and Mayfield going ten consecutive plays without a completed pass. A Tre Norwood interception following the Harris touchdown run simply gave Roethlisberger the curtain call he deserved – and fans cheered for.

Kicker Chris Boswell certainly could have been given the game ball as he led all Steelers in scoring. Although Roethlisberger was running the offense well, there were timing issues with receivers at times that made things more interesting than they should have been. Boswell was on target all night.

Ultimately, this game was “Ben’s game,” and Steelers Nation acknowledged it as such. Following the game, fans hurried to the first two rows of stadium seating as Roethlisberger made his way around, giving high-fives and being congratulated. After seeing Roethlisberger sit on the bench last season as he and Maurkice Pouncey talked about Pouncey’s retirement, it was hard not to feel the emotion Roethlisberger showed on national television as he celebrated with teammates, coaches, and fans after he was able to kneel down for the final play of the game.

Yes, Roethlisberger has one more game to play during this 2021 NFL regular season, a road game against the Baltimore Ravens. It’s uncertain, at this point, whether the Steelers will sneak into the postseason or not. Regardless, the game was a memorable one in that there are so many fans of Pittsburgh football who have only known Roethlisberger as “their quarterback.”

This week’s Steelers game ball is a “thank you” to Roethlisberger for the 18 years he’s been a part of Steelers Nation.