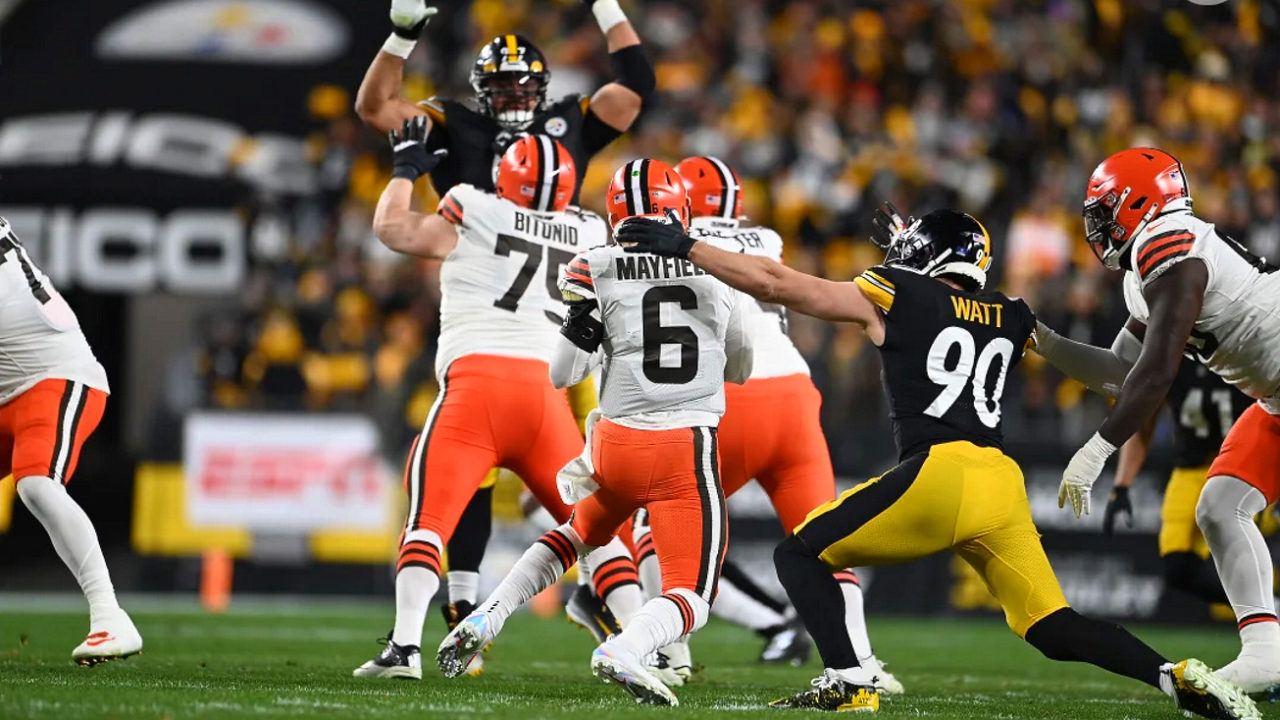 3Rivers’ Takeaways: Watt, Najee, and grabbing onto the energy

The Pittsburgh Steelers looked like a different team on the turf at Heinz Field during Monday Night Football. It wasn’t because they were playing a Cleveland Browns team that had already been statistically eliminated from the playoffs. It really wasn’t due to the fact that it was built-up and billed as Ben Roethlisberger‘s final home game for the Steelers. There was a different vibe from the team as a whole, true, but overall there seemed to be an element of things working together that hadn’t been seen much – if at all – during the 2021 NFL regular season for Pittsburgh. As a result, this week I have a few takeaways that might be less expected, and some that everyone is talking about.

Man on a mission

T.J. Watt has struggled throughout the 2021 NFL regular season to stay 100 percent healthy. Regardless of the fact that he was dealing with cracked ribs and a groin injury that has nagged him all season, Watt has been a man on a mission when it comes to being as disruptive for the Steelers’ defense as possible. Against the Browns, Watt was the leader of a Steelers defense determined to make Baker Mayfield‘s night as miserable as any he’d faced this season.

“His pressure rate relative to sack, to rush opportunities is what screams at you… When you’re putting yourself in position to affect the game as often as (T.J. Watt) does… the numbers are just a natural component that comes with it.” – Coach Mike Tomlin

Watt logged four individual sacks of Mayfield on Monday night, setting a new career-high for himself in a single game, and it just added to the mayhem the remainder of Pittsburgh’s defense did to Baker and company throughout the game. Overall, the Steelers put the Browns quarterback on the turf nine times.

Watt now sits at 21.5 sacks on the season. He needs just one sack to tie Hall of Famer Michael Strahan‘s NFL single-season record of 22.5 sacks (set in 2001). Watt needs just 1.5 sacks to break the record and has the opportunity to do that this upcoming Sunday in Week 18 against the Baltimore Ravens.

Harris gave Roethlisberger the gift of the “W”

With the Steelers defense playing the way it did, there weren’t as many real highlight-reel moments from the offense that many might have expected. There was, however, one key play by a special player that gave Roethlisberger the gift of a certified “W”.

In the fourth quarter, Najee Harris, the rookie back who has been impressive week-in and week-out despite the stats total in rushing or receiving, found his way through both his own line and the tight defensive formation the Browns were in to scamper into the open field and race his way down the right sideline for a 37-yard game-winning touchdown.

Grabbing onto the energy

Sometimes what a team on the ropes needs are a few key players to have an out-of-their-mind onfield performance. The energy becomes contagious. On Monday night, there was already one of the most favorable atmospheres at Heinz Field this season due to the potentiality of it being the last home game of Ben Roethlisberger’s career.

The usual suspects to grab ahold of that energy – Cameron Heyward, Alex Highsmith, Watt – found themselves being joined as more and more players were energized by what was taking place on the field. Call it a rally for “Big Ben” if you want. Call it “a win for the fans.” Whatever it was, it became almost magical.

Henry Mondeaux and Derreck Tuszka added to the sack total as rotational players. Ahkello Witherspoon grabbed an interception after earning two in the game against the Minnesota Vikings earlier in the season, earning himself the top spot on the Steelers’ roster in that category. Balls were being batted around at the line of scrimmage, guys were defending passes, and Tre Norwood grabbed a very late interception that gave him the opportunity to hand the ball to Ben Roethlisberger for a curtain call; a victory-formation kneel down for the win.

The Steelers have one more regular-season game. Carrying that energy over into their road game against the Baltimore Ravens may be just what they need, besides a little help, to feel this season was a success and potentially see postseason play.