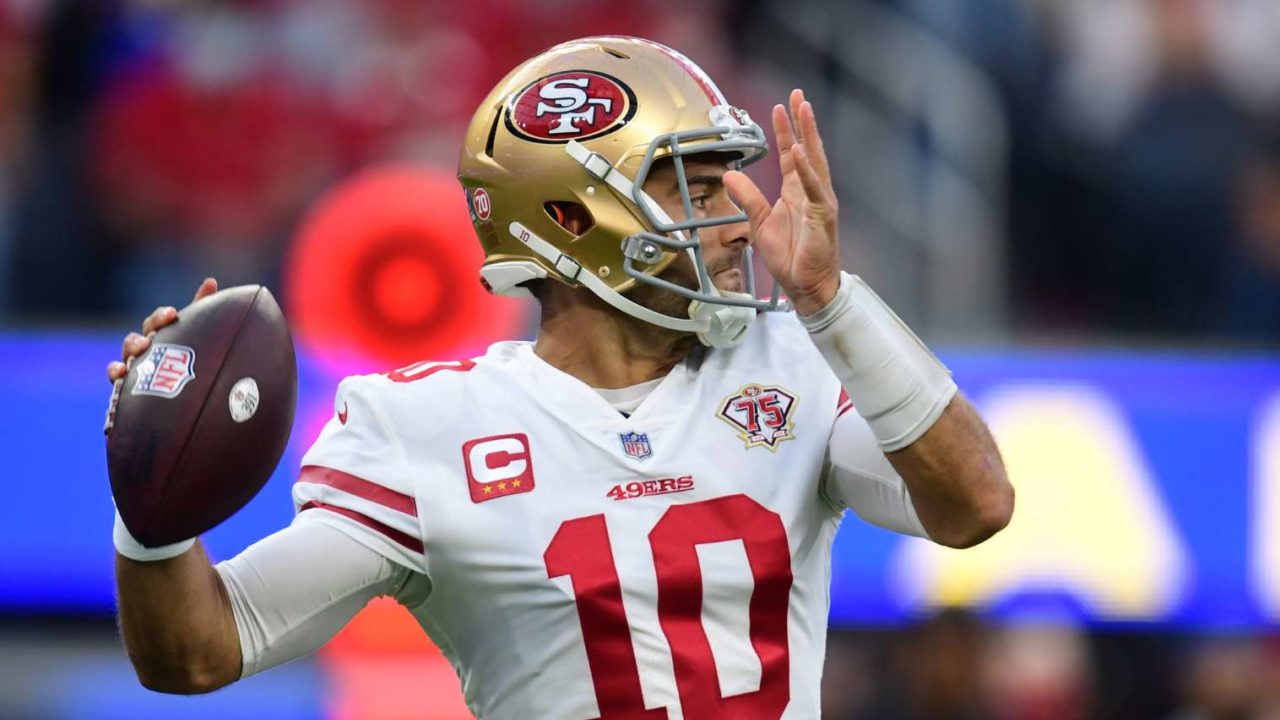 Arguments against the Steelers going after Jimmy Garoppolo

From the end of the season until the present day, I think I’ve seen other websites, TV and radio shows link no fewer than 30 different quarterbacks to the Pittsburgh Steelers, all trying to predict the best fit to replace the now retired Ben Roethlisberger.

In a series of upcoming articles, I’m going to highlight the pros and cons… just kidding. Only the cons – that is, of the Steelers acquiring a veteran quarterback this offseason.

This article focuses strictly on San Francisco 49ers quarterback Jimmy Garoppolo, who has spent the last five seasons with his current team.

Garoppolo has posted some respectable numbers during his tenure with the Niners.

However, there’s still a lot of various reasons as to why the Steelers should avoid adding him to the roster.

He’s not a free agent

This is the biggest point to be made.

While there’s plenty of speculation that the Niners may move on from their current quarterback, in light of trading up to take Trey Lance third-overall in last year’s NFL Draft, there’s still no guarantee that they’re going to move on from Garoppolo.

What will he cost?

This is the big question: what would the Niners want in a trade for Jimmy G?

With only 94 passing attempts to his name backing up Tom Brady, San Fran sent a second-round pick to the New England Patriots to acquire Garoppolo. The team then extended him to a 5-year, $137.5 million contract.

That figure would eat up most of the assumed Steelers salary cap of $28.7 million in 2022, relegating them to making other tough decisions with their own free agents or those players on the final year of their current deals, such as Minkah Fitzpatrick or Diontae Johnson.

A trade is a bad idea

Aside from salary, the Steelers can’t afford to dump any of their draft picks this season. The Steelers are already without a fourth or fifth round pick, after trading each to the Dolphins and the Jets respectively. They may recoup one of those picks in the NFL’s yet to be determined compensatory pick process.

For a team with many holes already, giving up any draft choices in addition to most of their salary cap would leave them in more of a rebuild mode than they currently are.

Consider that CBs Joe Haden and Ahkello Witherspoon, plus S Terrell Edmunds, are all free agents. Signing Jimmy G would mean the Steelers would have no money to extend offers to three of their starting defensive backfield players: giving away picks becomes even more problematic when there’s already question marks along both the offensive and defensive lines.

Plus, it’s highly likely the Niners could release Garoppolo if they can’t find a trade partner. Teams know that San Fran can save the above mentioned $25.5 million off of their cap with releasing Garoppolo, and therefore they may not be able to find a trade partner. The Steelers would be wise to at least wait out the trade offers and try to sign the quarterback straight-up, if there’s interest.

Still, I find it hard to pay what the new asking price: certain to be closer to $30 million and more than the additional $25.5 million the QB would currently make staying put.

Garoppolo has played one full season in his five with the 49ers. He has missed 34 of a possible 81 games during that span.

A vote for Jimmy G is almost certainly a vote for your backup quarterback to be warmed up on the sidelines.

Keep that in mind along with his asking price!

This is a big yikes from me.

Supposedly Jimmy G’s current shoulder surgery, which has yet to be mentioned as another red flag, is due to his shoulder being hurt in the playoffs – and hurting his performance.

But this decisions, or lack thereof, predate any injuries as well. And if not for the final playoff game he starred in, the NFC Championship game against the LA Rams, his numbers would be even worse.

Is he an upgrade?

The NFL Championship game ended on a bad Jimmy G interception as well, making me question if he’s truly an upgrade.

On the surface, his completion percentages and lack of turnovers are appealing. However, the cost of getting him on the roster outweighs those benefits, especially given his injury history makes him a higher risk to be available on game days.

Another red flag is that Garoppolo has never had a season with 4,000 or more passing yards or 30 passing touchdowns. That’s with a high profile offensive mind in Niners head coach Kyle Shanahan, a strong rushing attack coming out of the backfield, and two of the more elite passing game weapons in TE George Kittle and WR Deebo Samuel.

It should also be noted that he’s had one game with three or more (actually, only three) touchdown passes in the last two seasons with that same cast. Despite the woes with Roethlisberger at the helm, the Steelers future Hall of Famer still had two three-touchdown games last season and five the one before it: Jimmy G has only had five such games total in his time with San Francisco.

And for all of the recent kvetching about the Steelers offense under Matt Canada, do you truly believe that Garoppolo will be better in Pittsburgh? Or would he be worse?

His postseason games also follow a pattern of Ben Roethlisberger, Kordell Stewart, and Neil O’Donnell disappearing in some higher profile playoff games, as noted in the stats above.

That’s something Steelers fans are already griping about with Mike Tomlin’s recent lack of playoff victories, and not likely to be improved with Garoppolo eating up the salary cap and taking away draft picks, both of which are crucial to fielding a team around whomever the quarterback of the future might be.

For those reasons, Jimmy Garoppolo is a huge buyer beware for the Pittsburgh Steelers and the future of their franchise.