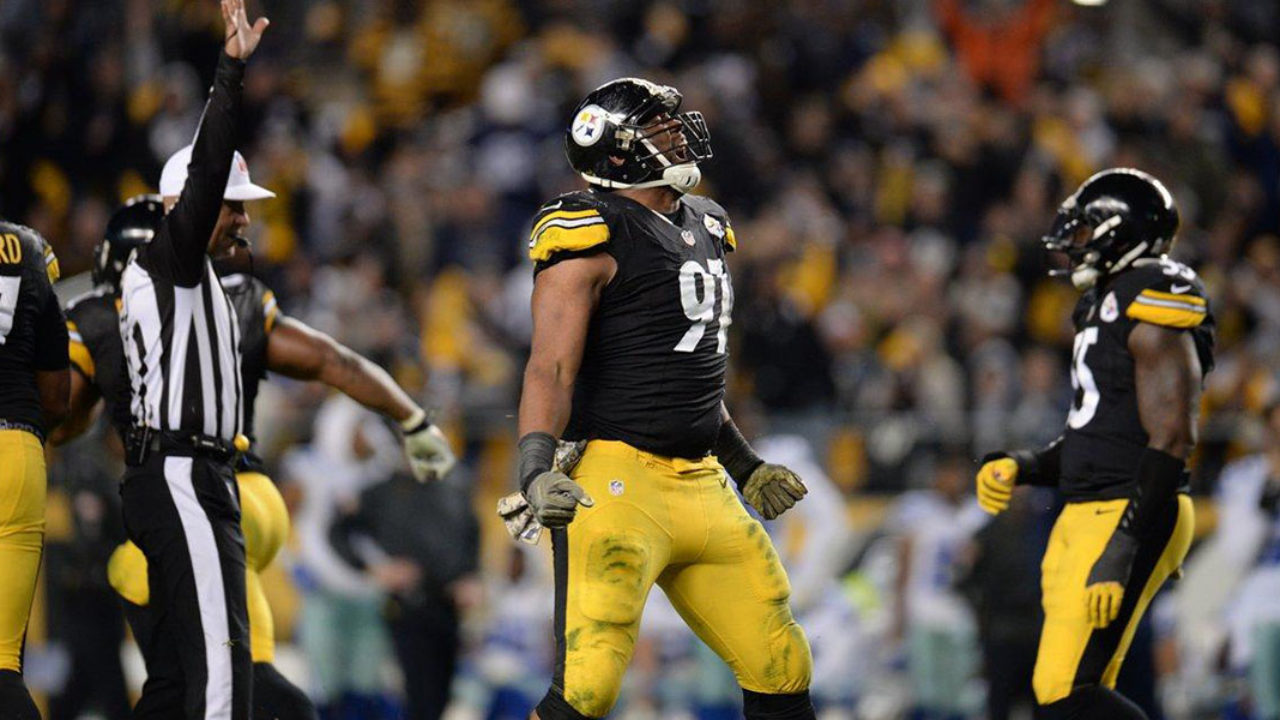 When news broke this spring that the Pittsburgh Steelers were losing defensive lineman Stephon Tuitt to retirement after the veteran struggled coming back from injury and his brother’s death, Steelers Nation sent heartfelt messages of support. This week, we’ll look back at his career in Pittsburgh.

The Georgia native chose Notre Dame over Georgia Tech as his collegiate home after leaving high school ranked as the second-best strongside defensive end in the nation and a five-star recruit by Rivals.com.

Tuitt’s final season with the Fighting Irish was his junior year. His 49 tackles (nine for a loss), 7.5 sacks, forced fumbles, and interception for a touchdown made the first team All-American (Sports Illustrated, ESPN, CBS Sports, Anthony.com) made him an interesting target for professional teams in the 2014 NFL Draft.

Due to foot surgery, Tuitt may have lost interest by many teams but Steelers head coach Mike Tomlin flew to South Bend to specifically meet with Mike Mayock‘s second-best defensive end prospect, although some analysts predicted he’d be better suited at defensive tackle.

After being drafted by the Steelers in the second round (46th overall), Tuitt signed his rookie contract and entered camp competing with Brett Kiesel, Cameron Heyeard, and Cam Thomas for a starting defensive end job. He became Heyward’s weakside DE backup. Tuitt finished that season with 19 combined tackles, 1.0 sacks, one forced fumble, and a fumble recovery in four starts and 16 total regular season games.

In 2016, Tuitt stepped into the role of starting defensive end opposite Heyward.

In November, Tuitt helped the Steelers beat the Cleveland Browns, 24-9, by earning a season-high two sacks on quarterback Josh McCown. His play in that game earned him the vote as AFC Defensive Player of the Week.

During the 2017 and 2018 NFL seasons, Tuitt continued to be an issue for Cleveland. In the 2017 season-opening 21-18 victory over the Browns, Tuitt tore a bicep before getting revenge for time missed by earning a season-high five combined tackles in the 28-24 Week 17 win against Cleveland. In Week 8 of the 2018 season, Tuitt recorded seven tackles, 1.0 sacks, and one pass defended in a 33-18 win.

Tuitt also wrecked the day for Joe Flacco and the Baltimore Ravens when the Steelers grabbed their fourth straight victory during the 2018 season.

Closing out a career

Tuitt struggled with injury again in 2019 but seemed on track as the 2020 season kicked off. He went on a rampage, earning his first sack of the season on Daniel Jones of the New York Giants in Week 1, then fed off Carson Wentz (1.5 sacks) in a Week 5 win over the Philadelphia Eagles. It was arguably Tuitt’s hottest NFL career season start when it came to sacks.

In Week 8, Tuitt had Lamar Jackson of the Ravens in his sights. He earned 2.0 sacks on Jackson and nine tackles in the 28-24 win. Tuitt was named the AFC Defensive Player of the Week for that performance before setting a single-season career high seventh sack on Jacksonville Jaguars quarterback Jake Luton.

Tuitt spent the entirety of the 2021 NFL season on injured-reserved; partly due to a knee issue and partly due to tragedy.
His younger brother, Richard Bartlett III, who’d been killed in a hit-and-run car accident in June, was a shock. As a father figure to brothers Richard, Jared, and Jaeden, Tuitt and his entire family struggled to understand why the driver who’d hit Richard, who was helping other family members along the roadside, had left the scene and justice went unserved.

On June 1 of this year, Tuitt, who’d kept in communication with the Steelers organization and had their support, announced his retirement via Twitter.

Despite the struggles Tuitt had with injuries in the time he played in Pittsburgh, he had a memorable career and was a personality worth being around. He will not be replaceable, similar to other Steelers who’ve moved on from football; he’ll have a successor.