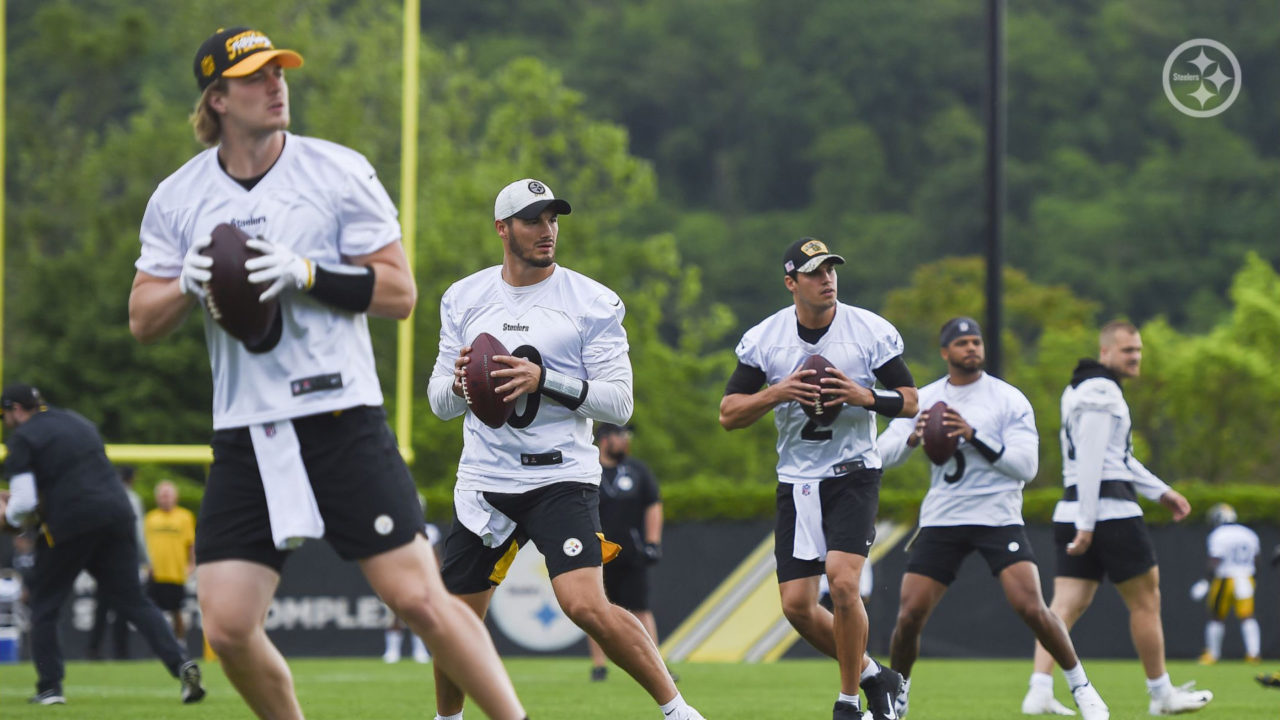 It seems like the topic of the Pittsburgh Steelers and who they’ll start at quarterback during the 2022 NFL regular season just keeps being resurrected like Lazarus; pundits just can’t seem to refrain from beating the drum. Today, we address some of the fallacies popping up time and time again surrounding Steelers rookie Kenny Pickett and allegations about the franchise’s plans.

It was intimated last week by lukewarm Pittsburgh radio personality Andrew Fillipponi that the Steelers organization’s standard is to not ask their rookie players to “wait their turn” before jumping into the fire Week 1. His Twitter message inferred that because Najee Harris, Devin Bush, Terrell Edmunds, and T.J. Watt all started at their position immediately, Steelers head coach is treating Pickett “differently” by not giving the rookie quarterback nothing but first-team reps in practices.

First, the players he referenced were called into action, much like Kendrick Green in 2021 at center, at the opening gun due to necessity. Bush was highly-sought by the Steelers as an integral part of their interior defense they’d been pressed to repair after Ryan Shazier was lost to injury. Harris was courted and brought in to be the lead back they hadn’t truly had after Le’Veon Bell held out and departed.

Pickett is in a different situation than many first-rounders; the Steelers have zero need for him to immediately start.

They invested in Mitchell Trubisky for veteran experience, held onto Mason Rudolph who has team experience, and have allowed those two quarterbacks to prepare as potential starters. That doesn’t scream of Tomlin treating Pickett in an untoward manner, it speaks to the level of coaching and preparation the Steelers feel comfortable offering Pickett at a suitable pace they’ve determined.

In essence, the Steelers don’t have a “way” – a tradition or standard – that governs how they play their rookies. To infer that there is goes against what has repeatedly been stated by the staff and franchise, and is disingenuous and cynical.

Contrary to popularly-held beliefs by many who can’t seem to grasp history or statistics, Ben Roethlisberger did not immediately start at quarterback in Pittsburgh after he’d been selected in the first round of the 2004 NFL Draft. In fact, Big Ben nearly wasn’t selected by the Steelers at all.

Bill Cowher and Kevin Colbert were loading up to grab offensive guard Shawn Andrews before Dan Rooney pointed out that Roethlisberger was still on the board.

Like Pickett, Roethlisberger was third on the depth chart at quarterback in his first training camp. He remained in the third spot until Charlie Batch was injured during preseason play and didn’t elevate to “starter” until a third-quarter injury to Tommy Maddox led to Roethlisberger entering the Baltimore Ravens game and then being “the guy” in Week 3 against the Miami Dolphins.

Pittsburgh isn’t alone in the NFL in trusting a process to develop quarterbacks, either. Kansas City Chiefs quarterback Patrick Mahomes played one game behind Alex Smith his rookie season (2017) before earning his place as the team’s No. 1 spot. “Goat” Tom Brady played in a single game for the New England Patriots his rookie season behind Drew Bledsoe and Lee Johnson. Lee Johnson!

Pickett isn’t being short-changed by Tomlin or the Steelers staff. If anything, he’s being given the very best opportunity for long-term success.

With little-to-no pressure to immediately know the intricacies of Matt Canada’s offensive scheme under critical circumstances, Pickett can bank repetitions as a pupil without fear of failure.

Rudolph, and by necessity Devlin Hodges, experienced a more high-pressure immediacy very early… again, due to injury (to Roethlisberger). Look how that turned out for them.

The Steelers are fortunate to have four players in the quarterback position, including Chris Oladukon, heading into training camp. Assumptions that Pittsburgh will simply move on from Rudolph are just that. Rudolph offers the most upside in tutelage to Pickett – and even Trubisky when it comes to playbook and team chemistry – since he’s been in the organization the longest.

It’s time for fallacies to be put to rest surrounding the Steelers and their relationship with Pickett; whether it’s regarding opportunities versus missed opportunities, snap-counts, first team or second team, competition, starts, or organizational. The Pittsburgh Steelers obviously have much larger insight into how Pickett fits into their plans and goals.