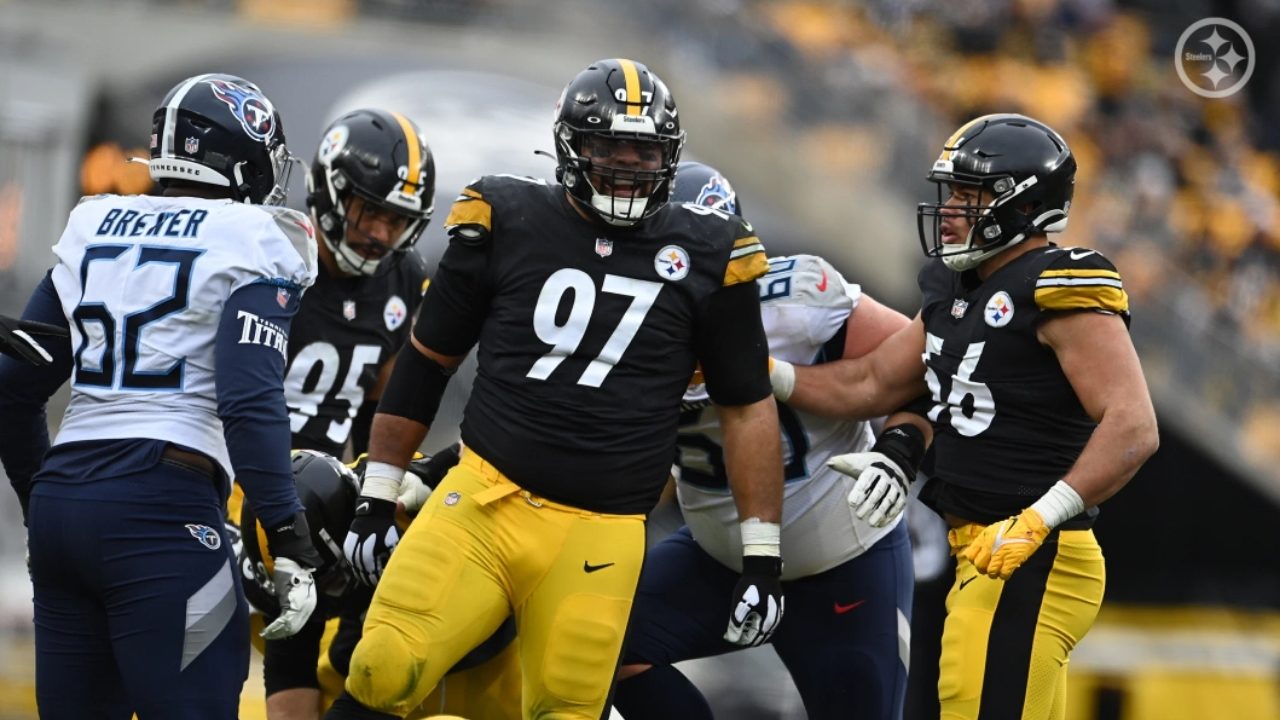 The Pittsburgh Steelers defensive line took a lot of heat last year as the entire unit failed to hold up at the point of attack against opposing run games.

The Steelers failed to contain opponents to 100 yards or fewer in 13 of their 17 regular season games in 2021. They allowed 200 or more rushing yards in four games, and over 125 yards in ten total games.

It was the worst Steelers rushing defense in the history of the franchise, finishing dead last in yards given up as well as yards-per-rush.

The Steelers also have new defensive coordinator Teryl Austin in the mix, which could switch up schemes on defense as Keith Butler retired during the offseason. The hope in 2022 is the coaching move and some of the personnel holes are now patched, including a replacement for Stephon Tuitt, who retired after sitting out all of last season (due to personal issues).

Here’s a look at the defensive linemen for this upcoming year.

The Steelers first round pick in the 2011 NFL Draft continues aging like fine wine. At age 33, he was second on the team in sacks with ten, only to T.J. Watt’s all-time record-tying 22.5.

After going unrecognized for many years, Heyward has been named to the Pro Bowl in each of the last five seasons, and as First-Team All-Pro in three of those five.

Heyward will continue to be a menace to deal with this season. 2021 was the second-time he’s registered double-digit sacks and having more help along the defensive line will mean fewer double teams, as opponents attempt to figure out how to block Watt as well.

A big missing piece of the equation last season was Alualu, another former first-round pick (with Jacksonville) who was lost for the season after the first defensive series in Week 2’s game against the Las Vegas Raiders.

The Steelers missed his presence as the 3-4 nose tackle and frequent substitute for Heyward and Tuitt as a defensive end.

The 35-year-old skipped going back to Jacksonville when he was a free agent last season, opting to stick with the Steelers. Unfortunately, he played a little over one game – and was sorely missed as the team had no viable replacement for him.

With Tuitt also out all season, the defense wasn’t the same upfront, and had to cycle through a number of players to find any combination that was capable of stuffing the opposing run game.

Alualu, even with fewer snaps as he gets older, should be a big boost for Pittsburgh’s defense.

The primary backup to Alualu and Tuitt found himself in a major supporting role last season when both were sidelined early on.

Wormley would appear in 15 games with 14 starts, registering a career-high 7 sacks with highs in tackles, TFLs, and QB hits.

Wormley played adequately against the run, but struggled with a lack of support.

The loss of Alualu and Tuitt meant Wormley had to kick out to defensive end exclusively – and substitution options were limited for when Wormley had to catch his breath on the bench.

Based on some of the other additions below, he’ll be competing for a starting job in 2022 but will still see a majority of snaps, even if he’s rotating in from the sideline.

A late free agent addition, Ogunjobi makes his third stop in the AFC North after being drafted by the Cleveland Browns and playing last year with the Cincinnati Bengals.

With Cleveland, Ogunjobi was dynamite in 2018 and 2019, combining for 11 sacks, 20 TFLs, and 28 QB hits. He would spark the Bengals defense before an injury sidelined him right before the postseason, registering a career-high 7 sacks, 12 TFLs, and 16 QB hits.

Ogunjobi was prepared to sign a three-year, $40.5 million deal with the Chicago Bears – who then passed by failing him on a physical.

Teams can do this at will, as there’s no standards for a “fail” but it did raise enough concerns that no one else, including the Bengals, attempted to sign him.

Following the official retirement of Stephon Tuitt, Ogunjobi was quickly snapped up by the Steelers on a one-year $8 million contract. The hope is that he’s fully healed from Lisfranc surgery and can compete for starting reps as a 28-year-old veteran.

The Steelers’ third round draft pick this season was, at times, considered a potential top pick in various pre-draft and preseason rankings.

NFL Analyst Bucky Brooks had Leal named in his top five defensive tackles entering this year’s draft, up there with the likes of Georgia’s pair of Jordan Davis and Devonte Wyatt.

Leal was an AP first-team All-American last season while also being named to the first-team All-SEC team. He was a finalist for Ted Hendricks Award as the nation’s top defensive end too, after picking up 58 tackles, 12.5 TFLs and 8.5 sacks… in only 12 starts.

Leal fell into round three as some teams saw his size as too small to play on the line and too large for end.

Luckily for the Steelers, those teams don’t utilize their defensive ends the same as Pittsburgh does in a 3-4.

Reportedly, Leal has already put on some extra mass to make the move to 3-4 defensive end, as opposed to an outside linebacker (or “edge”). He fits Pittsburgh’s plans of replacing Tuitt along with Ogunjobi and Wormley, but may be slowly brought along at first to get acclimated to the pro game.

That’s because things were so dire with either of the Davis brothers, Carlos Davis and Khalil Davis, with either being unavailable at certain times during the season. Carlos would appear in four games with five combined tackles. Khalil was mostly remanded to practice squad duty.

Each gave way to practice squad mainstay Henry Mondeaux, who has played in 22 games over the last two seasons, but almost exclusively in a reserve or special teams role. He could find himself the odd man out in a crowded group.

Montravius Adams was signed off of the New Orleans Saints practice squad in Week 13. Pittsburgh’s situation was so dire that they ended up starting Adams in the same week he was signed. He was such a surprise that he returns on a two-year deal and has a good shot of picking up nose tackle reps off of Alualu.