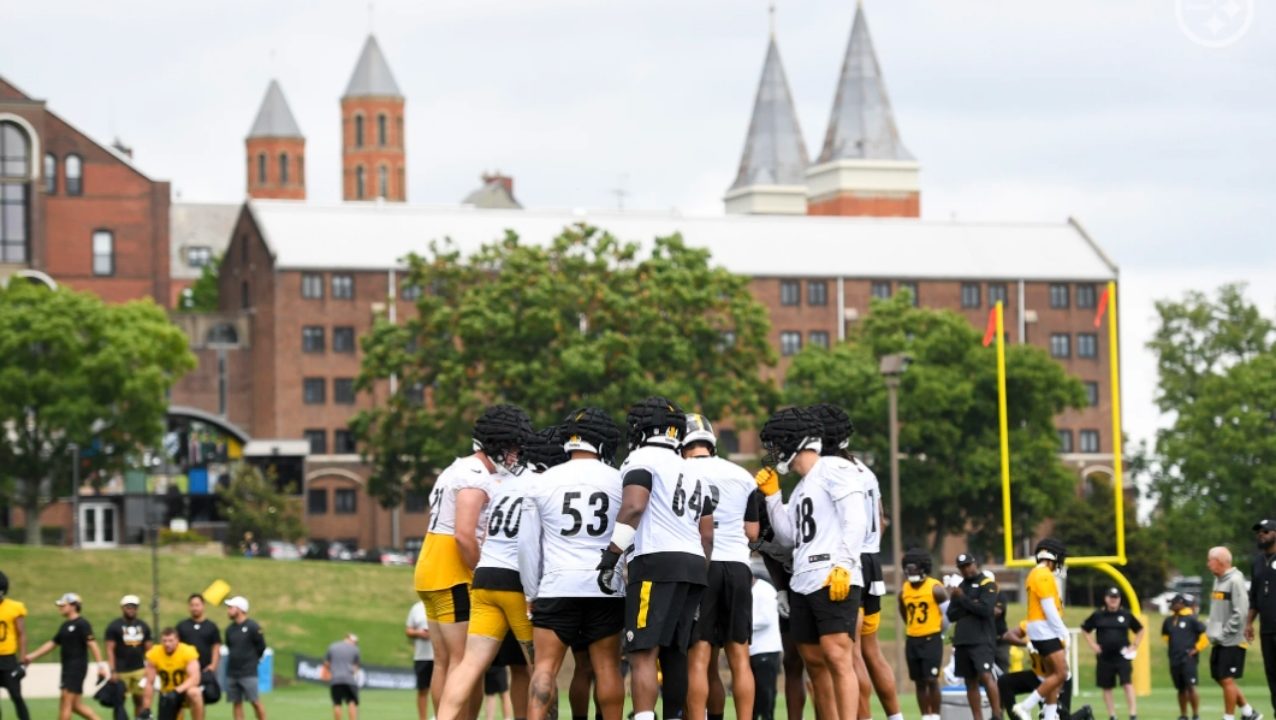 With fans elated that the Pittsburgh Steelers were back at St. Vincent’s College (Latrobe, Penn) for training camp, expectations were mixed about what Day 1 would reveal. We present some of the takeaways and observations made, in person, by Joe Kuzma, and others during an NFL-mandated shortened practice on Wednesday.

There was a lot of chatter before camp surrounding Najee Harris working to improve his physique and his on-field presence. On Wednesday, it was apparent no exaggerations of the running back’s efforts were needed.

It was only the first day of camp, but appearances are that Harris is ready to make a statement in his second NFL season.

Although he was limited in who he worked with, it is a good sign that he’s making every effort to show he wants to be with Pittsburgh this upcoming season… and longer, if possible.

Meanwhile, rookie receivers Calvin Austin III and George Pickens look to be taking full advantage of the repetitions they’ve been given and a budding camaraderie. Pickens made a couple plays that jumped out, even if extra effort on one reception resulted in him being out of bounds.

“The effort of Pickens to finish (the play) all the way and he even dove for it… You like seeing the rookies go out there and do that.” – Kuzma

“We have some young guys in that position,” head coach Mike Tomlin said of players getting increased repetition opportunities, “who are going to take advantage of some of those opportunities and, hopefully, for the good ”

I instantly see why he’s here. More of that can create mismatch problems for sure!

Younger Heyward could be camp phenom

Fans of Cameron Heyward were elated when the Steelers grabbed his younger brother, Connor Heyward in the 2022 NFL Draft. They got their first look at how the fullback/tight end might be utilized in Pittsburgh offense on Wednesday.

Heyward was known to be a versatile player in college and it appears he’s embracing that early in his first NFL training camp. In the past, it’s been noted that he plays hard and with intensity.

“He’s got something in his genes from the old ‘Ironhead Heyward’, his father…” – Kuzma

The only troublesome news from Day 1 was a pectoral injury to Miles Killebrew. The veteran defensive back was an important piece to the Steelers’ backfield last season. As of the writing of this article, the severity of the injury is unknown.

Minkah Fitzpatrick worked one-handed to the side at practice due to a hand/wrist injury he reportedly is nursing following a biking accident. He was doing grip drills, making left-handed catches to stay active and doesn’t appear to be out for an extended period of time.