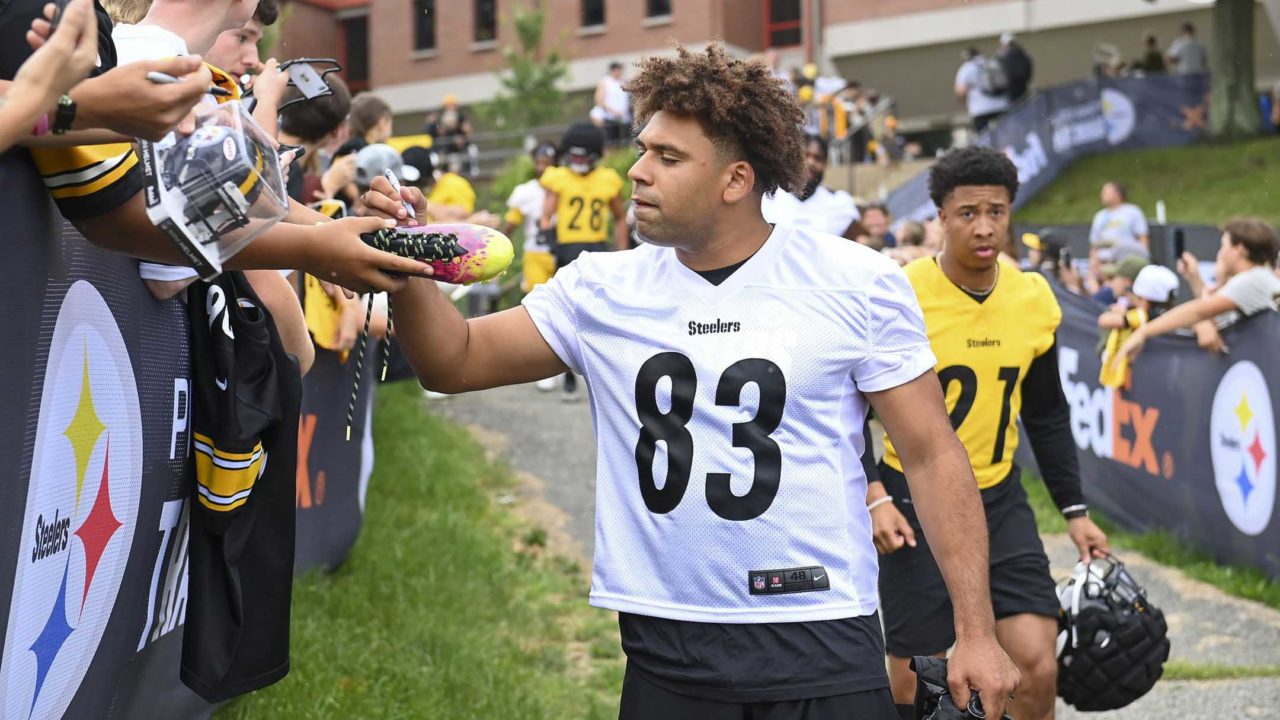 Observations from the first full week of Steelers training camp

With roughly one week’s worth of Pittsburgh Steelers training camp practices in the can, here are some observations made from those periods at Saint Vincent’s College in Latrobe, Pennsylvania.

The storylines everyone was looking for all offseason didn’t manifest as many wanted it to once camp got underway.

It was Rudolph, however, that looked the sharpest through the weekend, as Pickett was mostly remanded to fewer snaps or… and this must be prefaced with: the traditional first, second and third team reps aren’t as traditional as before.

But if one had to classify where Pickett is in the pecking order, it was third in rotation with Trubisky first, and of course, Rudolph second.

At one point, it was starting to look like a two-quarterback battle, but Pickett received some “second team” shots on Monday, and while Trubisky and Pickett have had some underwhelming moments, each is still firmly in the conversation.

As of now, it’s anyone’s job, but Trubisky should still be first in line with it being his spot to lose.

With Ben Roethlisberger’s retirement, there’s no longer a “number one” at the quarterback position.

However, there’s also a number of evenly matched players rotating in and out of key position groups too.

As noted above, each of the quarterbacks gets to work with nearly the entire depth chart of skill position players. Rookies, such as George Pickens and Calvin Austin, are working with Trubisky, Rudolph, and Pickett.

They’re facing a rotation of defensive players, along the defensive line, inside linebackers and the secondary.

Demontae Kazee has been primarily filling in for Minkah Fitzpatrick (on the NFI list, and currently not practicing.) Myles Jack, Devin Bush, and Robert Spillane are cycling in with one another, as are Cameron Sutton, Ahkello Witherspoon, and Levi Wallace.

It’s an intriguing, fluid dynamic versus a strict “ones versus ones” of past camps.

This has to be mentioned, because a lot of fans believe just because Oladokun was drafted, that he would threaten one of the other quarterback’s jobs.

For the most part, there’s been a three-way split, usually with Pickett getting a bit of the shorter end of snaps sometimes – but Oladokun isn’t registering any in team exercises, which means the Steelers are focused on giving as many reps to the top three in the aforementioned “battle”.

The shifty, stout hybrid fullback-tight end can scoot around the field and is being used in a variety of ways. Pittsburgh clearly has a plan for his versatility, but that doesn’t mean FB Derek Watt is going anywhere, anytime soon.

Watt is last year’s special teams captain and was primarily signed to play in that third phase of football. His job isn’t in jeopardy because his role is clearly defined, and albeit listed as a fullback, he’s not “competing” with the younger Heyward for a “fullback” roster spot.

Also note, the Steelers have, in fact, rostered a true fullback with an H-back on past Mike Tomlin teams too.

The Steelers have a good problem heading into this season.

Aside from the rookies, Pickens and Austin, turning heads, they may have another receiver vying for a shot on the roster: Anthony Miller.

The former second round pick of the Chicago Bears appears to be in the best condition of his career. He’s doing everything you’d expect from a veteran, and then some, often coming back to his quarterbacks on extended plays and getting his hands on combat catches. He, along with Austin, have had the opportunities to shine with Diontae Johnson having his “hold in” while hoping to sign a contract extension.

Chase Claypool has still looked the part, while another added receiver this offseason, Miles Boykin, has been out of sync with his quarterbacks.

Tyler Vaughns, an undrafted addition out of USC, has also flashed potential.

One more note: Gunner Olszewski, who was added as a return specialist, has gotten some chances to shine in his listed receiver role.