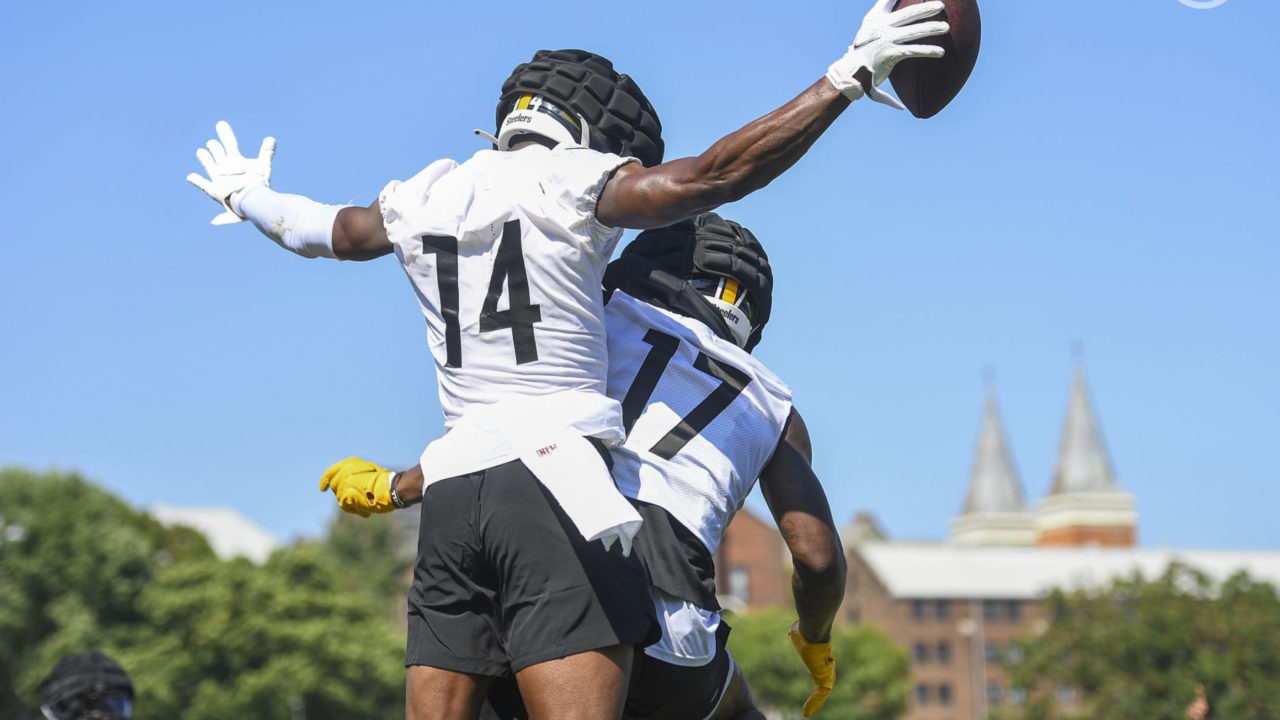 Updated news and notes from Week 2 of Steelers training camp

From finding newly retired Ben Roethlisberger‘s first replacement in 18 seasons to seeing if any of this year’s rookies and free agents will have an impact, there is a lot of activity coming out of the Steelers training camp based at Saint Vincent’s College in Latrobe, Pennsylvania.

A number of storylines have been circulating throughout Steelers Nation over the last two weeks. Some of the soundbites require more explanation than others, and it isn’t always clear on how the team is operating or which players may have an edge on making the team.

From my perspective below, I will try to demystify those narratives and add some clarity to what’s going on at Steelers training camp.

This was a difficult task before several players started sitting out due to injuries or veteran days off.

Initially, training camp began with Steelers head coach Mike Tomlin rotating out potential starting players with the “one’s” or “first team”. Traditionally, you’d usually see the locked-in, expected starting 11 (or variations of, for 7-on-7 drills) but no rotations unless there was a specific camp position battle.

This season, Tomlin is usually cycling out skill position players, such as receivers, running backs, and tight ends, with each of the quarterbacks who are competing for the starting job.

Making this definition even trickier is that the usual “first team” splits are something like 40/40/20. So Mitchell Trubisky and Mason Rudolph may end up throwing passes to George Pickens and Anthony Miller, each of whom aren’t playing the snaps.

Since Najee Harris, Pat Freiermuth, and Chase Claypool haven’t been practicing this week, and Diontae Johnson is staging a “hold in” for a new contract, it means that players like Pickens, Miller, Calvin Austin, Zach Gentry, and Benny Snell are all pulling double duty.

It also means that Trubisky and Rudolph aren’t really playing with “first team” player since most of the expected starters are sitting on the shelf. So, keep this in mind when you hear the media say “first team” because Gentry and Snell are clear backups when the others are healthy.

The quarterback competition continues to heat up, as Mason Rudolph looked the most poised and comfortable, with most reporters crowning him the “winner” of Week 1’s camp sessions. (Side note: I would concur with them as well from my own observations at camp.)

However, even with Rudolph seemingly going in second on all drills and doing well, its Mitch Trubisky who continues to lead all drills in camp.

For a short period earlier this week, Steelers first round draft pick Kenny Pickett ran with the “two’s” and was second in the pecking order over Rudolph. That seems to have subsided back to Rudolph, to where Pickett is getting reps but way fewer than the two veterans.

I’d say that Trubisky and Rudolph appear to get a 40/40/20 share in any drill, but sometimes its as much as 100% with Pickett sitting out – or getting maybe one shot in “7 shots”.

Seventh round pick Chris Oladokun is rarely seen passing in these same drills aside from some of the individual work. He’s an afterthought in team drills as the coaching staff hones in on finding a starter, in what might pan out to be a two-way race between Trubisky and Rudolph.

When asked who the most impressive player was they’ve seen in camp thus far, reigning NFL Defensive Player of the Year T.J. Watt chimed in with Bush’s name.

However, the fourth-year linebacker has been rotating in-and-out with Miles Jack and Robert Spillane.

Much like Trubisky, Bush is clearly the first one on the field in drills, but its also his job to lose as Spillane sees a lot of “first team” (again in quotes) work.

Punting job up for grabs?

Special Teams work took front-and-center several times throughout training camp, but usually the punters are relegated to a far field while everyone gets to see the offense and defense do their thing.

On Wednesday, the punters got to take center stage.

Typically, any specialist brought in, such as a kicker or punter, is in an uphill battle to win a spot on the roster. For example, Chris Boswell just signed a four-year contract extension that made him the highest-paid kicker in the NFL.

That doesn’t bode well for Wake Forest’s Nick Sciba: but that doesn’t mean he may not be called upon to spell Boz during preseason games or even be called back if there’s an injury to Boswell or another team scouting opposing rosters.

However, the punting job could be up for grabs. Incumbent Pressley Harvin III didn’t have the most consistent 2021 season. His competition, Cameron Nizialek, already has pro experience having played four games for the Atlanta Falcons last season, while spending two years with them (mostly on their practice squad).

The former Georgia product opened eyes with some nice kicks while Harvin continues to show his booming leg – when he’s consistent, which hasn’t always been the case thus far.

Coach Tomlin stood close by during these drills and was incredibly vocal on some of Nizialek’s punts, exclaiming once “There you go Cam! There you go!!” after a brilliant long, hanging boot.

We shall see if this manifests in the preseason. A poor punt or two could see the end of Harvin’s tenure in Pittsburgh, despite the “thick kicker” having dropped a reported 40 pounds this offseason.

Fullbacks in full use

One of the harshest criticisms has been the use, or lack thereof, of FB Derek Watt with the Steelers offense.

Watt doubles as a core special teams player (and captain) but that hasn’t stopped the kvetching about him having the highest cap hit among the offense.

Those fans would be surprised to see Watt getting a bit more reps on offense throughout camp, even if its to fill in for some injuries.

Pittsburgh also drafted Cameron Heyward’s brother Connor Heyward in the sixth round. The younger son of NFL great “Ironhead” Craig Heyward moonlights as both a fullback and tight end. As such, he isn’t performing the same exact roles as Watt and is often seen motioning out of the backfield and into the slot.

He’s a shifty player who finds ways to get open and has been a major security blanket for all of the quarterbacks competing for Ben Roethlisberger’s old spot. It wouldn’t surprise me if Heyward sees some significant snaps in game action, including the regular season, as he’ll create matchup problems – not only covering him, but the other Steelers weapons.

The other offensive position battle

There’s another battle going on at training camp that isn’t as widely publicized, between Kevin Dotson and Kendrick Green, for the Steelers starting left guard position.

Green, who was drafted in the third round last season to play center, has played exclusively as a guard throughout camp and has shared some “first team” reps with Dotson.

It currently appears to be Dotson’s job to lose, but still something of note as Pittsburgh continues to upgrade their o-line.

The Steelers have had a reputation for drafting and developing wide receivers taken all over the board throughout the last decade plus. This year is no different, as second round selection George Pickens and fourth round pick Calvin Austin have been very impressive throughout training camp.

However, its not only the draft picks that are turning heads.

Former Chicago Bears second round pick Anthony Miller, who spent most of last season on the Steelers practice squad, showed up to camp in phenomenal shape and is making plays all over the field. His route tree is diverse and he can be seen running deep posts, outs, drag routes and more.

He’s even bailed out each of the signal callers in extended plays by wriggling free of coverage and coming back for the ball.

To a lesser extent, undrafted free agent Tyler Vaughns has stood out by catching nearly everything that comes in his direction.

Each will put pressure on the Steelers for a spot on the 53-man roster and/or practice squad with the team seemingly locked into at least five receivers: Johnson, Claypool, Pickens, Austin, and return specialist Gunner Olszewski.

Miles Boykin, who was claimed off of waivers from the Ravens this offseason, has struggled to hold onto some passes but also offers something many of the others do not: he’s 6-foot-4. His size alone may reserve him a spot somewhere in the Steelers future plans.