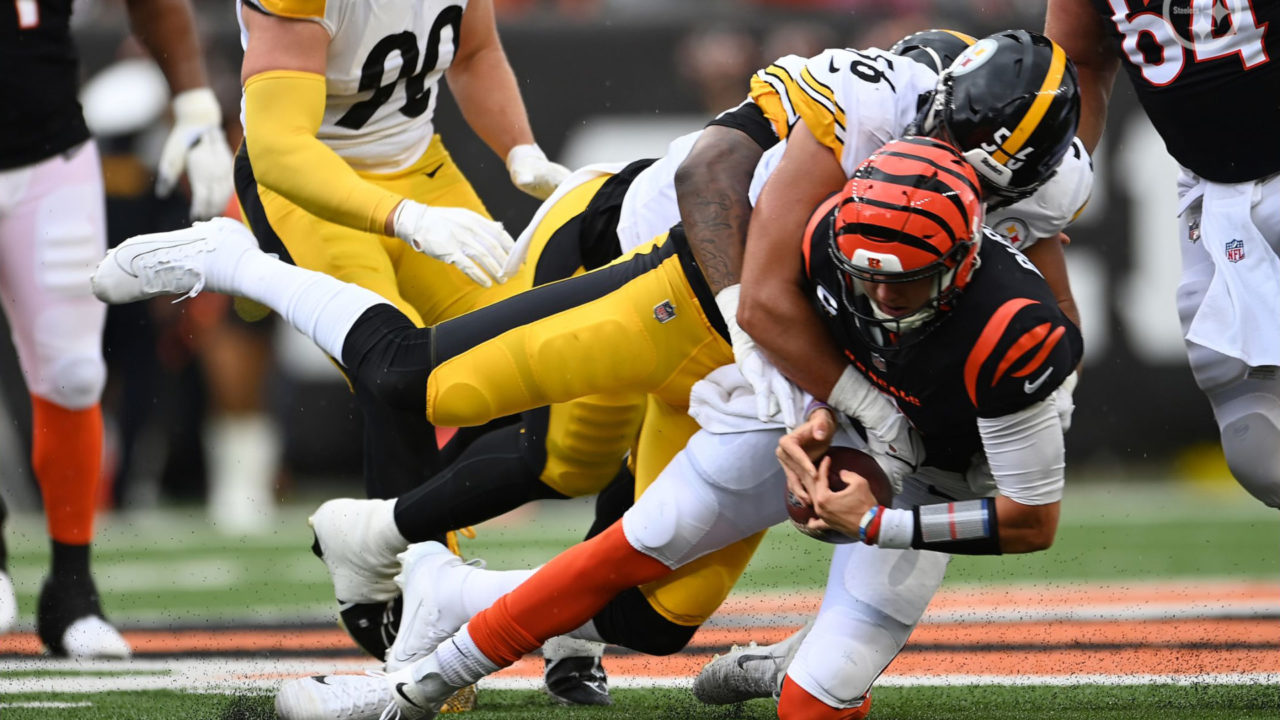 NFL Week 1 Takeaways: Steelers beat Bengals in OT, but road ahead is rocky

On Sunday, September 11, the Pittsburgh Steelers walked into Paycor Stadium with a chip on their shoulders after being swept by their AFC North rival Cincinnati Bengals during the 2021-22 NFL regular season. The Steelers were considered underdogs, said to have laid down and given up in their last games against their southernmost divisional rivals. Although the Steelers remained in the fight on Sunday, with the defense absolutely dominant, the game did end up being a dogfight into a crazy overtime period that saw both teams miss opportunities. Pittsburgh ultimately won, 23-20, in overtime but their road ahead is going to be a rocky one.

Steelers’ defense feeds on the opportunity

The Pittsburgh Steelers had heard it all heading into this game, especially from Bengals fans who had their team pegged as Super Bowl-bound once again despite not having played a single snap outside of exhibition (preseason) play; their fans made all sorts of wild claims on social media while baiting individual players. Steelers safety Minkah Fitzpatrick was targeted heavily in the pre-game trash talking on Twitter.

To say that the Steelers took that energy and head coach Mike Tomlin’s statements from the end of camp where he said, “dominant defenses smile in the face of adversity,” and what was put together on the field was the ultimate pushback from Pittsburgh. No trash talk needed.

The Pittsburgh defense put Bengals quarterback Joe Burrow on notice, nearly immediately. On the first offensive drive of the game by Cincinnati, veteran Cameron Heyward got into the Bengals’ offensive backfield and sacked the young signal caller. On the very next play, Fitzpatrick jumped a passing route to earn the first interception of the day and take it into the end zone for a “pick-6”.

By the end of the overtime win, the Steelers had sacked Burrow seven times while also earning 11 hits. They combined for five total takeaways (a recovered fumble and four interceptions), defended nine passes, added nine tackles for a loss, and gave the Bengals fits in the red zone. Alex Highsmith led the defense with 3.0 sacks.

While all of that was great, there is a caveat. In the words of Tomlin: “We needed five (turnovers) today.” Had the defense not, once again, stepped up, this game may have ended very differently. That was because the offense once again started off slowly and was most often unable to convert the defensive takeaways into touchdowns.

Offense was pedestrian but stayed in the fight

The Steelers offense is going to be talked about all week after this game for a few reasons. One, the offensive line did a relatively decent job of keeping the Bengals from manhandling quarterback Mitchell Trubisky, but they didn’t provide much in the way of run-blocking for Najee Harris and Jaylen Warren. Roll that back, though, because it was clear that Cincinnati – who has a great front seven defensively – was keyed in on Harris who had to leave the game with a foot injury. Second, Trubisky looked the veteran under pressure but still has yet to find a way to finish drives in this Steelers offense.

While rookie George Pickens was nearly invisible, Chase Claypool and Diontae Johnson both made a few nice plays when the opportunities arose. The duo both had at least one spectacular catch in the game. Likewise, Pat Freiermuth and Zach Gentry both got into the receiving mix. Harris did get a touchdown in the game, but it came on a short pass in the red zone.

There just weren’t enough critical drive extensions completed by Pittsburgh offensively in the game and the Steelers were forced to rely on kicker Chris Boswell to make up the difference.

There isn’t just a single issue to focus on, completely, though. Offensive coordinator Matt Canada seemed to have some razzle-dazzle stuffed into the back of the playbook that he was willing to send out for Trubisky to run – some of which worked – but the Steelers offense needs to consistently be able to be led down the field drive after drive. Gadget plays aren’t going to earn wins every week.

The Steelers have a few things that need cleaned up and polished. That shouldn’t take away from the outcome of the first game of a new NFL season… but it does.

Tomlin said, following the game, “If you got ground to defend, defend it. If you got bullets in the gun on offense, you fire them… More than anything, at the early stages of the season, when you have new guys, you just want to know that they’re in their game – that they don’t shrink in the moments.”

There is room to grow on Pittsburgh’s roster, and they’re not going to have much of an opportunity to hinder that growth, now, due to some potentially serious injury questions.

Harris may be hampered throughout the season with the Lisfranc injury he had dealt with throughout camp and the preseason, but Warren looks capable of stepping into the backfield. The Steelers may have anticipated potential issues by keeping depth at running back on the active roster and on the practice squad. Harris’ condition will be something to keep an eye on.

The real rock in the road, though, may be the condition of T.J. Watt. On Sunday, late in the game, Watt suffered what is being called an “upper body” injury. During the game, though, Watt seemed to be verbally indicating to medical staff that he believe he’d torn a pectoral muscle. That could keep Watt out of the defensive rotation for a major part of the season, depending on the severity.