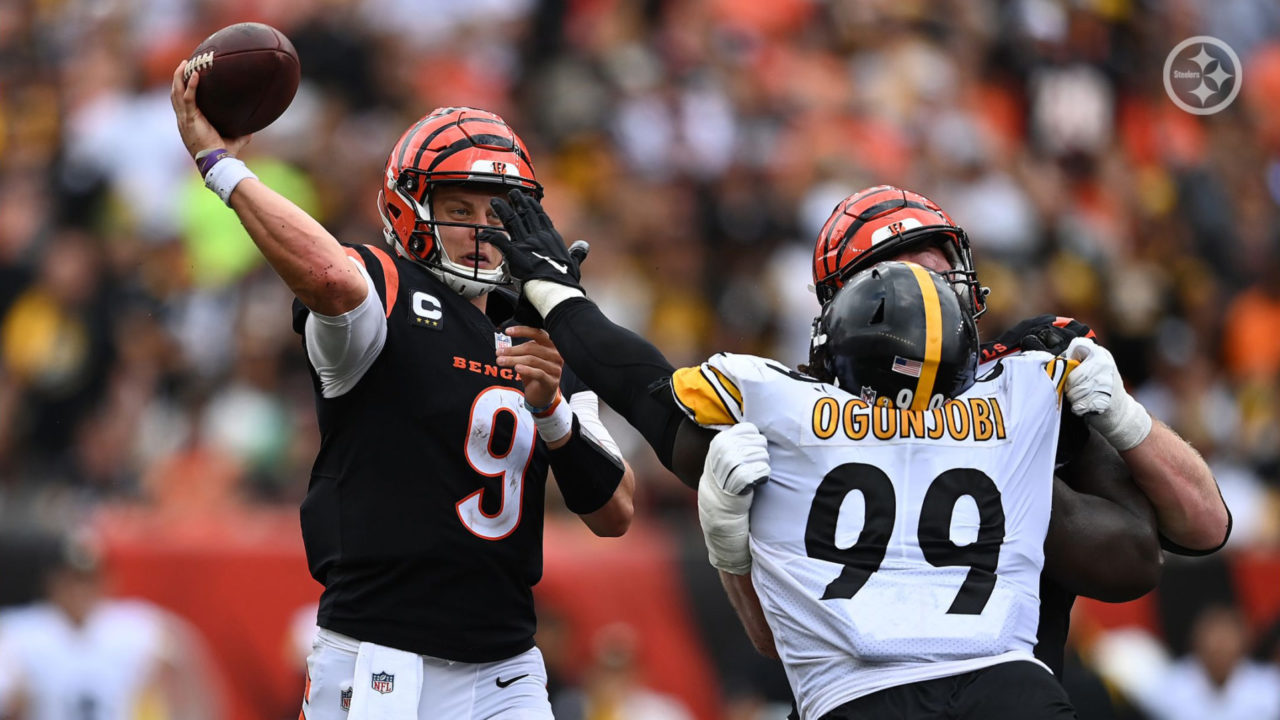 6 Steelers surprises in Sunday’s “upset” over the Bengals

On Sunday, the Pittsburgh Steelers traveled into the newly renamed Paycor Stadium in Cincinnati to take on the defending AFC Champion Bengals.

The Steelers came away with a 23-20 victory. Here are some of the surprises from that game.

There are a lot of folks out there who will debate that a win was always in the cards: I wasn’t one of them.

The Steelers have a number of growing pains, particularly on offense, with a new quarterback running the show and an offensive line that sometimes looks as suspect as the underperforming one last season.

None of the media “talking head” types were giving the Steelers a chance to win. Bookies had the line set with Pittsburgh as a 6.5-point underdog as well.

Yet, they went on the road and somehow eked out a victory.

Joe Burrow set a single-game career low on Sunday by throwing four interceptions: and it should’ve been five! (One of the plays was changed later to a fumble in the official statistics.)

The former first-overall pick of the 2020 NFL Draft is a savior to Cincinnati’s franchise, setting several team-records last season and leading them to the Super Bowl. However, he wasn’t himself this weekend, as he took a sack on his first dropback of the game and followed it up with a pick on the very next pass attempt.

Mitchell Trubisky: The Good and The Bad

Trubisky recognized a free play (via penalty) during the overtime period as the clock ticked down under a minute.

Had he not made a heads-up throw to Pat Freiermuth, the Steelers wouldn’t have had the time – or yards – to get into position for Chris Boswell‘s game-winning 53-yard field goal.

The Steelers need to sustain drives on offense to keep their defense off of the field and that simply did not happen.

Bengals Offense: How many plays?

Officially, the Cincinnati Bengals ran 94 plays on offense, but with penalties, the official snap count for the Bengals offense and Steelers defense, was 100 snaps!

(If you’re newer to football or generally unaware, a full game usually has an average of 50-60 snaps total!)

That’s over a full quarter of football more! Wow!

Who would’ve thought that Bengals kicker Evan McPherson would miss not one, but two potential game-winning kicks at the conclusion of this game?

“Money Mac” as they call him in Cincy was a rookie phenom and a missing element the Bengals had been searching for years as a solid kicker.

Earlier in the game, McPherson blasted a 59-yard field goal. However, as the game wound down, Cincy’s long snapper was injured and replaced with a backup tight end. This resulted in bad snaps/timing that saw McPherson’s PAT blocked by Minkah Fitzpatrick, and then yet another miss in the overtime period.

Seeing Chris Boswell also miss a potential game winner (from 57 yards) was at least surprising within the context of the back-and-forth flow of the final minutes of the game too!