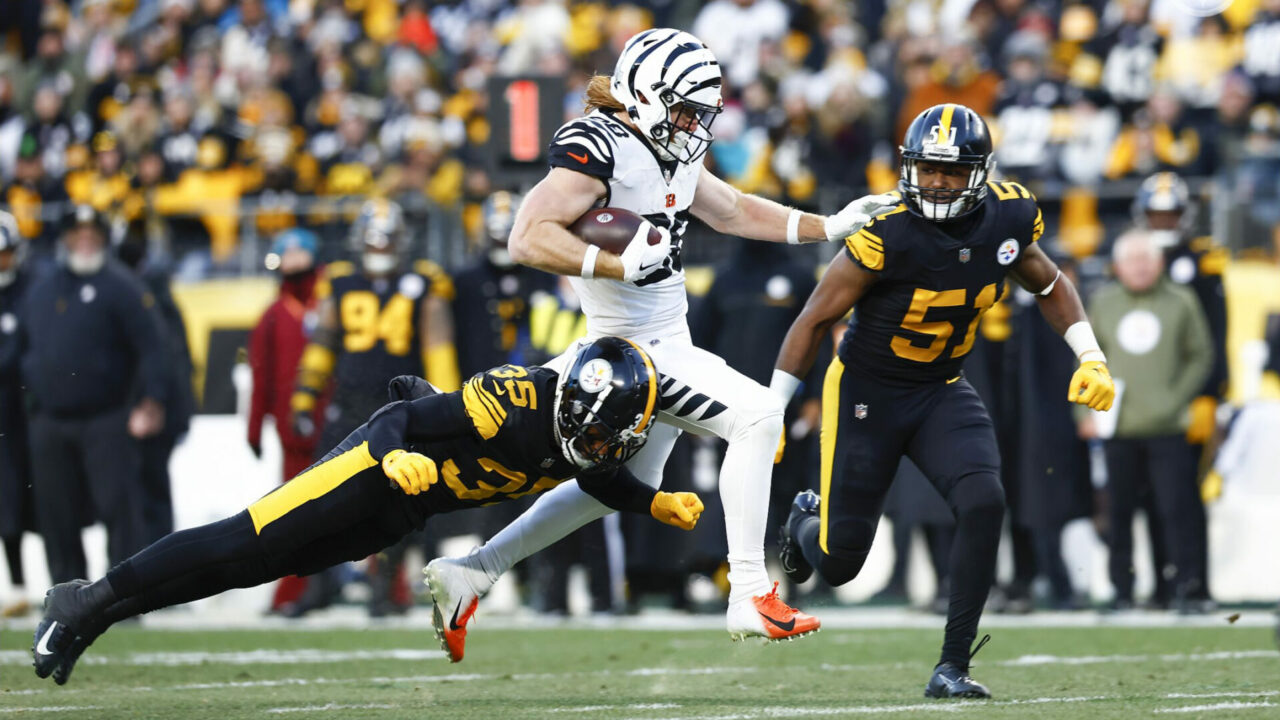 Predicted to be a battle ahead of NFL Week 11 of the 2022 NFL regular season, the AFC North showdown between the Pittsburgh Steelers and Cincinnati Bengals at Acrisure Stadium lived up to its billing. Although the Steelers took some steps forward, they were a rollercoaster team on Sunday afternoon whose inconsistencies lead to a 37-30 win by the Bengals.

For the fans who’d been waiting to see if the offense could be as dynamic as it was in Week 10, they got a mixed bag. Pittsburgh was able to put 20 points on the scoreboard in the first half for the first time this season. One touchdown was a deep throw from Kenny Pickett to George Pickens; another was a hurdle by Najee Harris into the end zone. Matthew Wright tacked on two field goals and two PATs.

While the third quarter was abysmal, with Pickett under heavy pressure from the Bengals, the Steelers still added another field goal and a second touchdown from Harris, although his dive over the goal line was in the final seconds of the game and still left Pittsburgh down by seven with no real shot at tying things up.

“The run game needs to be consistent in order for our offense to work the way it needs to be and the way it should, [the way] that it looked like in the first half. So we know what it looks like and we just got to execute at a higher level in the second half.” – Kenny Pickett

There were times when the offensive line was blocking well – both for the run and in pass protection – yet they couldn’t quite get to the level of efficiency in opening many holes for the rushing game and allowed too many hits, pressures, and sacks on Pickett in critical situations. It was disappointing after seeing them gel against the Saints.

“At one point, we were 5 for 7 on third downs. We scored 30. That was our first time all season scoring 30. That was good. But it’s not good enough. In the NFL, you need to be good enough to win games. We need to execute on important downs to be able to succeed.” – Najee Harris

Penalties were a factor in this game, as well. It’s something head coach Mike Tomlin has stressed to this team: execution. Fans were bitter in their comments after his press conference, but coaching players still is not equal to the players doing what they’ve been taught over and over again.

The offense did score its longest and second-longest touchdown plays in this game. Pickens’ catch went for 24 yards while Harris’s first TD was a 19-yard run. That is far better than the 8 yard touchdown posted previously… but there’s still work to do.

There’s little doubt that T.J. Watt makes a difference for the Steelers defense. If he wasn’t pressuring Joe Burrow, it was Alex Highsmith and Cameron Heyward busting into Cincinnati’s offensive backfield. They weren’t alone, but they certainly played a key factor up front.

Watt grabbed an incredible interception at the line of scrimmage that even Burrow couldn’t believe. The Steelers offense couldn’t turn it into more than three points, though.

“We’ve got a core group of guys. We know we’ve got to step up and hold each other accountable. This was not it. We’ve got to execute better.” – Alex Highsmith

The defensive backfield for Pittsburgh, ballhawks against the Bengals in Week 1 and decisively better against the Saints, fell short in this game, as did the interior linebackers. Too many times, Robert Spillane, Myles Jack, or Devin Bush were caught on the short end of a Bengals play meant to target the weakness over the middle.

Burrow read what Pittsburgh was offering and checked into the best target much too easily. Fans who thought the Steelers might use a healthy dose of three-safety sets on critical downs that required Burrow to pass in order to convert were left wanting, no doubt.

Although Levi Wallace grabbed his second interception in two weeks, the defensive backfield – including Minkah Fitzpatrick – did not play like this was a game in which the Steelers finally had a full compliment of healthy starters (though they did).

Tee Higgins, who was quiet in the first half, came to life in the second to wreak havoc against the Steelers secondary.

“We knew that they were going to try to get the ball to him. We just (had) to figure out how to stop him.” – Terrell Edmunds

Pittsburgh didn’t and the Bengals receiver caught 9-of-13 passes on which he was targeted for 148 yards.

Pickett took some big shots and made some smart decisions in this game while not turning the ball over.

He has taken a lot of criticism over the past few weeks. This week, fans were asking why he wasn’t hitting Diontae Johnson. Johnson was heavily guarded for the majority of the game.

There’s no doubt he’s learning on the fly and that he’ll continue to grow and improve. The issue, now, is that the season is only seven games away from being over. Pickett showed he can run the offense; the final scoring drive of the game for Pittsburgh showed that.

In order to grow at a quicker pace, however, the Steelers need to be accountable in playing their best game at their position to give their rookie QB a shot at getting them the points they need to win. Until that happens, Pittsburgh will remain a mediocre 2022 squad.