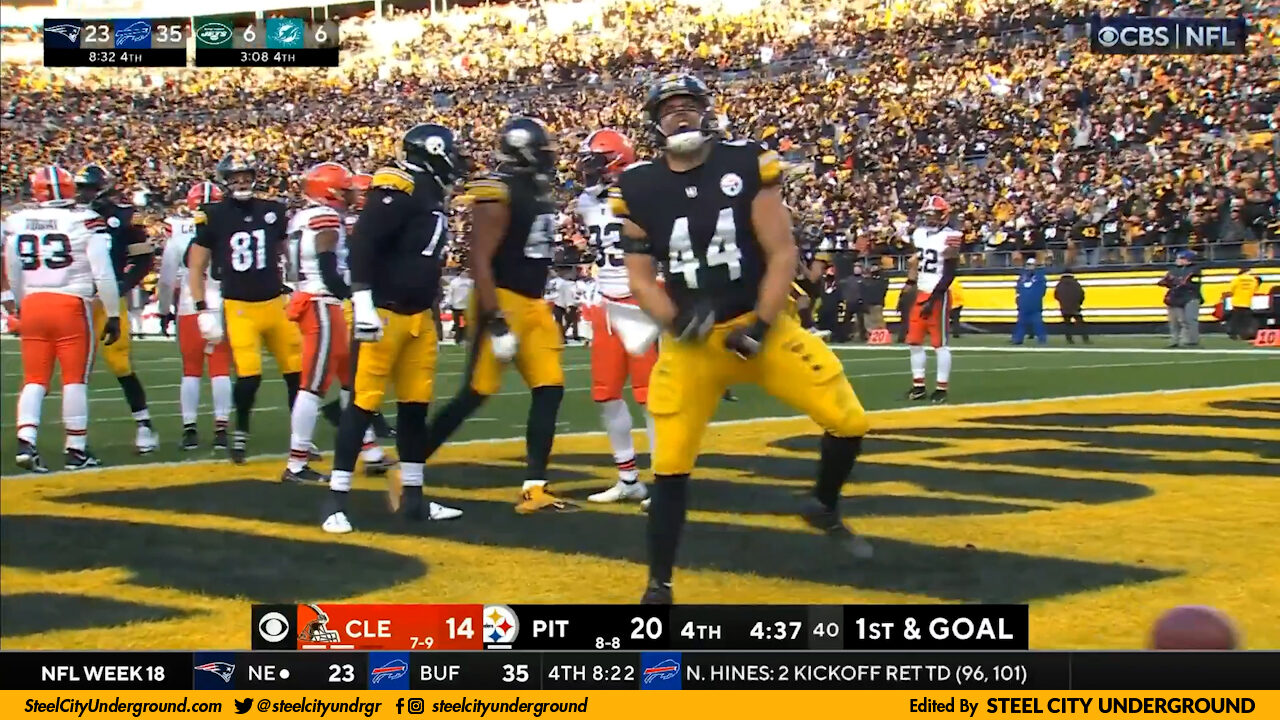 In Week 18 of the 2022 NFL regular season, the Pittsburgh Steelers hosted the Cleveland Browns in an AFC North rivalry game that had to be a win if Pittsburgh wanted a shot at the playoffs. Following a Browns touchdown off of another horrible bit of officiating, the Steelers offense capped off a 14-play, 75-yard drive of their own with a fullback draw by Derek Watt.

Ahead by just six points, at 20-14, the Steelers couldn’t afford for the Browns to claw themselves into the lead. Rookie quarterback Kenny Pickett started the drive off at Pittsburgh’s 25-yard line. With an injury to Pat Freiermuth, Connor Hayward entered the game at tight end and caught passes of nine-yards and a big 27-yarder that may have been his biggest play since a touchdown against the Atlanta Falcons.

Running back Najee Harris also got in on the drive, adding rushes of six yards, and two two-yarders while counterpart Jaylen Warren grabbed a one-yard run.

Although the running plays didn’t grab big chunks, they helped keep the Browns defense from simply sending the blitz and stacking the box.

Following a deep pass to George Pickens for 17 yards, Pickett tried to get the ball to receiver Diontae Johnson that fell incomplete, one due to a tip by the Browns defense. The effort was respectable as Pickett tried to give Johnson his first receiving touchdown of the season.

Following a defensive pass interference call on Cleveland that moved the ball closer to the goal line, the Steelers came out of a quick timeout with 4:37 left in the game.

From the Brown’s one-yard line, Pickett snapped the ball and as Harris and Hayward motioned left. Pickett hesitated just enough to create the draw to Watt, who’d lined up outside of the left tackle and grabbed the handoff, before blasting into the end zone behind solid blocking.

Pittsburgh opted to go for the two-point conversion in order to make it a two touchdown game. Pickett found Johnson for a successful pass-and-catch to convert.

The touchdown was Watt’s second of the season and third of his NFL career. Watt finished the regular season with the Steelers, not just as a special teams ace, but having logged one receiving touchdown to one rushing touchdown.