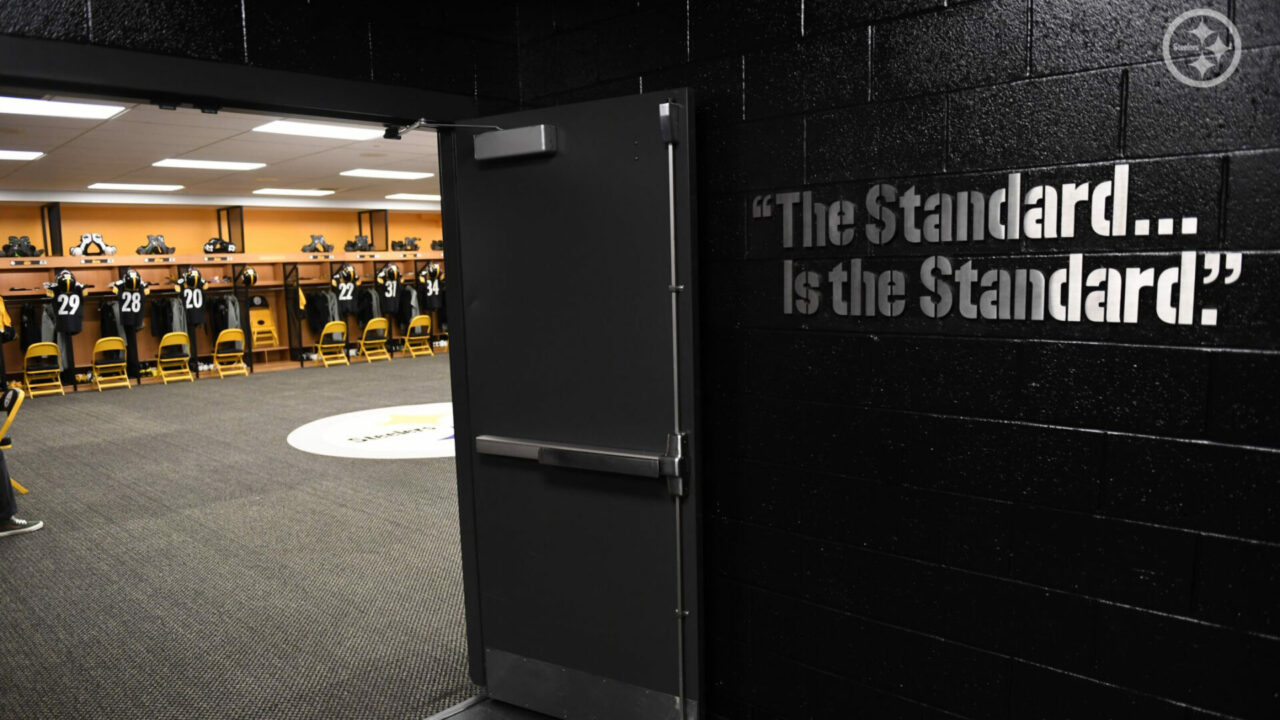 However, that isn’t enough for some fans. No, to them, Tomlin actually defines the word “mediocrity,” a term thrown around frequently by those with a big enough platform to preposterously state such.

Yet, somehow this mediocre coach has done something no one else has to date. In sixteen seasons, Tomlin hasn’t finished a season lower than .500. But, since the Steelers didn’t make the playoffs, it’s another year of fans collectively losing their minds.

In fact, I wrote about “The Standard” all the way back in October, when the fan base was kvetching over everything from Tomlin to his staff, the front office, recent NFL Drafts, and yes, even the Rooney family. In that article I mentioned:

Fans are questioning Tomlin’s “Standard”, claiming that his ways “no longer work” and with some, in the sports media if you’ll call it that, questioning the coach’s recent lack of playoff success as well as his if the team has drafted properly over a several year span.

There’s quite a bit of meat to chew off of this bone. First, let’s take Tomlin’s winning seasons: somehow, some way, he’s been able to avoid falling below .500, no matter who is on the field.

His opponents will quickly rant “What has he done with all of that talent?” while also lamenting “They suck at drafting.” Gee, if that’s a contradiction, I’m not sure there is one.

The “talent” portion, is usually referred to as one of two eras. The first is “winning with Bill Cowher’s players”, something I myth-busted years ago down to reminding folks that Lawrence Timmons and LaMarr Woodley never suited up for the previous Hall of Fame coach.

The commonalities on the 2005 and 2008 Super Bowl teams were intrinsically linked to players such as Ben Roethlisberger, Troy Polamalu, Hines Ward, and Heath Miller. Even eventual league Defensive MVP James Harrison was cut multiple times by Cowher, and mostly sat behind franchise great Joey Porter.

The second era is that which saw Big Ben join with Le’Veon Bell, Antonio Brown, and Martavis Bryant to create the “Killer B’s”. It was an exciting time in Steelers history as a usually boring offense purported several fantasy stars.

Tomlin won with the first group, at least once, but only got as far as the 2016 AFC Championship game with the second group – and for a variety of reasons, namely, injuries and suspensions.

Most fans will claim if Maurkice Pouncey plays in the 2010 Super Bowl loss to Green Bay, then Tomlin’s resume would have another Lombardi Trophy listed. The same could be said for the middle of the 2010’s, when franchise greats like Casey Hampton and James Farrior retired, Polamalu began to fade (also due to injuries) and the team was in rebuild mode.

They would get back there, but each postseason experience was met with a different battle to fight. In 2014 it was losing Bell in the last game of the regular season. In 2015, that happened again, while DeAngelo Williams – a veteran signed as an insurance policy in case Bell suffered a similar fate to the year before – also fell to injury.

Do yinz remember the name Fitzgerald Toussaint? Xavier Grimble? Fumbles plagued the Steelers in Denver as a noodle-armed Peyton Manning rode off in the sunset of his legendary career at Pittsburgh’s expense.

2016 shared a similar fate when Bell, who was finally available in the postseason – breaking Franco Harris’ rushing records two weeks in a row – would bow out of the AFC title game against the Patriots within five plays.

The “weapons” or “talent” that fans lament most, Artie Burns, Sean Davis, even Jarvis Jones, were fixtures of that 2016 defense, which had to rely on a youthful resurgence of not-so-youthful James Harrison, who was coaxed out of retirement weeks after signing a one day deal to ceremoniously go out as a Steeler.

Alas, 2017 was the year. Finally, all of the B’s were available after a 13-3 season placed the Steelers as the second seed in the playoffs. It would be the only time that Ben, Bell, Brown, and Bryant all played in a postseason together. Unfortunately, it came to this as Ryan Shazier was paralyzed weeks earlier and the Steelers struggled to defend the middle of the field in a shocking home loss.

By the way, Jesse James caught that football, and the Steelers should’ve avoided the bad matchup with the Jaguars altogether.

2018 saw the team implode into another rebuild where Brown and Bell were now suddenly gone in 2019, as would be Big Ben as well, six quarters into that season – landing on IR with a season-ending elbow injury.

Tomlin still found a way to keep Pittsburgh afloat, finishing 8-8 with Mason Rudolph and Devlin Hodges under center, and still with a shot to make the postseason when their final regular season game ended.

An 11-0 start to the 2020 season was marred with injuries to Shazier’s replacement, Devin Bush, and burgeoning starter Bud Dupree. COVID restrictions kept others sidelined, and fans out of the stands, for a home playoff loss to the Cleveland Browns. We already know that 2021 was a struggle, and that season ended abruptly by the hands of the Kansas City Chiefs.

All of this may sound pathetic to some – with no playoff win since the 2016 campaign, yet, it’s better than some franchises can brag about.

The Baltimore Ravens have all of two playoff wins since their big Super Bowl finish in 2012. John Harbaugh’s guys have had bottom finishes in the division, and playoff misses too, despite drafting a future league MVP quarterback in Lamar Jackson.

The Browns were sky high with top overall picks Myles Garrett and Baker Mayfield, but had to keep changing coaches to finally get a playoff win for the first time since 1994 (which was coincidentally ended by the Steelers.) Cleveland wasn’t satisfied and tried to stack their roster by trading for a new franchise quarterback, Deshaun Watson, only to find themselves in the basement of the AFC North and trailing the Steelers record for a 33rd consecutive season this year.

The list of hits keeps on rolling when it comes to inconsistency. Forget about three wins since the 2010 Super Bowl, the New York Jets haven’t been in the playoffs since 2010. The Miami Dolphins haven’t won a playoff game since 2000 – and that win came in overtime.

The Chargers have two wins since 2010, despite purportedly having franchise quarterbacks that other teams lust over, such as Philip Rivers and Justin Herbert. Their answer was to fire coaches, yet their fourth coach since just had the third-worst playoff lead blown in NFL history last weekend.

While I’m at it, up until last year Bengals fans had never sent a text message about a playoff win, it had been that long.

This all goes without mentioning other franchises who are truly toiling in mediocrity, such as the Houston Texans, Detroit Lions, and Chicago Bears.

Yet, some smartass on the Internet will quip, “What is the Standard?” Well, let’s fill you in.

“The Standard” is remaining competitive to where all but one game in a sixteen year span sees your team still in playoff contention. It’s getting your foot in the door of the tournament, where records are tossed aside in a single elimination format.

It’s not shooting your shot at expensive propositions that might not fix your team. (Cough, Watson.) It’s not blowing future roster-building by trading away picks for that pricey player, or to move up for that “can’t miss” prospect who, eventually, is a misfire.

In a model of consistency, the team that “drafts poorly” found a Defensive MVP (T.J. Watt) with the 30th pick of the NFL Draft. They shrewdly traded for a safety (Minkah Fitzpatrick) who has been named an All-Pro in three of his four seasons with the organization.

And it’s patiently using others’ evaluations against themselves, when they’d otherwise fall over one another in a bidding war, if only a certain rookie quarterback had bigger hands.

“The Standard” affords Steelers fans to sit in the stands and have something to look forward to each Sunday. Even when they appear to be down, the Steelers fight back – they get shifted into primetime, the provide memories (such as defeating Tom Brady) and gave us all hope up to the remaining minutes before the Dolphins won a 9-6 slugfest.

It also gave another glimmer of hope for the immediate future, as young players mesh within a “revamp” of the roster that all but the snarkiest of critics feels can vastly improve with a wise addition in free agency or the draft.

You cannot say the same for those other teams – or their coaches – and that’s why “The Standard is The Standard”. If you don’t understand that, then simply put, your standards are too unrealistic for today’s NFL.