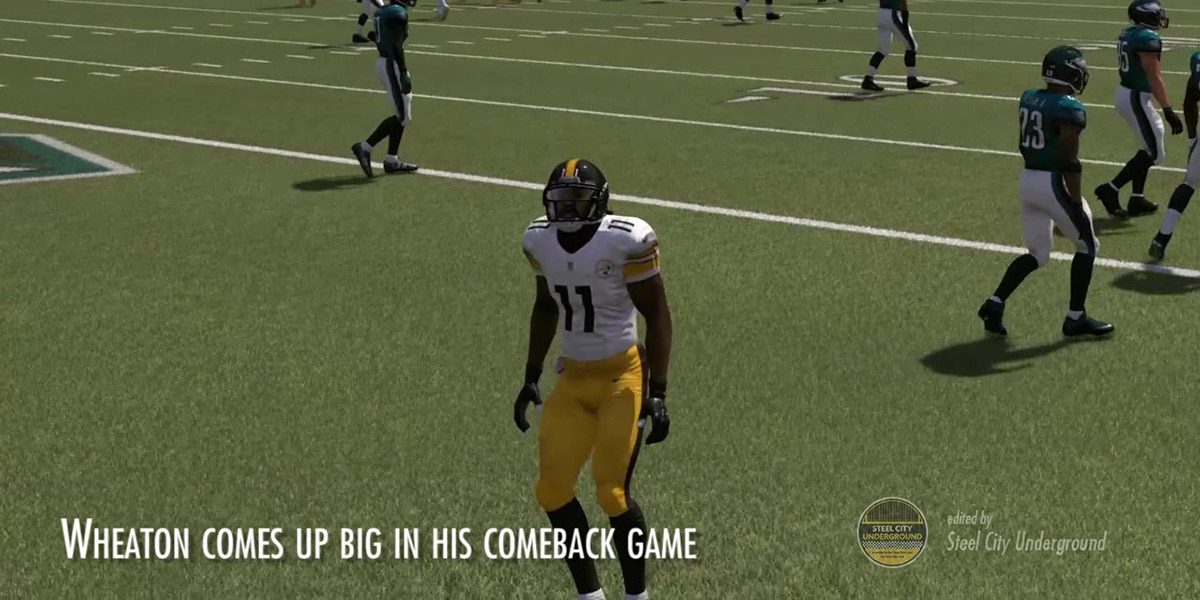 by Eric Herrmann (SteelersGrind) on September 23, 2016

Another week another Madden simulation.

We’re still figuring out the best methods for this segment, so we’re trying something new this week.

Rather than giving you all the fake stats, i’ll be recapping all the highlights in this weeks video. If you miss the old format, let us know. We want to give you guys what you like.

We’re also going to ignore that the Steelers lost in the simulation… anyway!

Stephon Tuitt’s first highlight is clutch. On 1st and goal, he managed to fight off a double team and sack Carson Wentz for a 9 yard loss. Tuitt is an up-and-coming star on this defense and certainly is capable of these sorts of highlight plays.

Jesse James hauls in the deep pass from Big Ben

This play may be a blown coverage from the Eagles, but it still displays Jesse James’ growth. He has proven to be a legitimate receiving threat and he shows that on this play. His blocking is far from perfect, but James’ has been a weapon for this offense.

Stephon Tuitt gets his second sack of the game here. He may not have been double-teamed, but this play is impressive because he beats Jason Peters, one of the top left tackles in the league. I said it before and I will say it again, Tuitt is going to be a star.

AB being AB (for the TD)

What else is there to say here? Antonio Brown can beat any cornerback in the league with his route running ability and speed. I feel bad for any cornerback who has to face him.

Wheaton comes up big in his comeback game

I love this play. It shows just how ridiculous Madden can be because Wheaton does a nice 360 degree spin before hauling in the touchdown catch.

Ben extends as “The Outlaw” moves the chains

This play is simply “Ben being Ben.” A phrase you’ll see all over twitter because it’s vintage Ben – him using his legs to extend the play under pressure. It’s why we love him. He hits Jesse James, also known as “The Outlaw” for a nice gain.