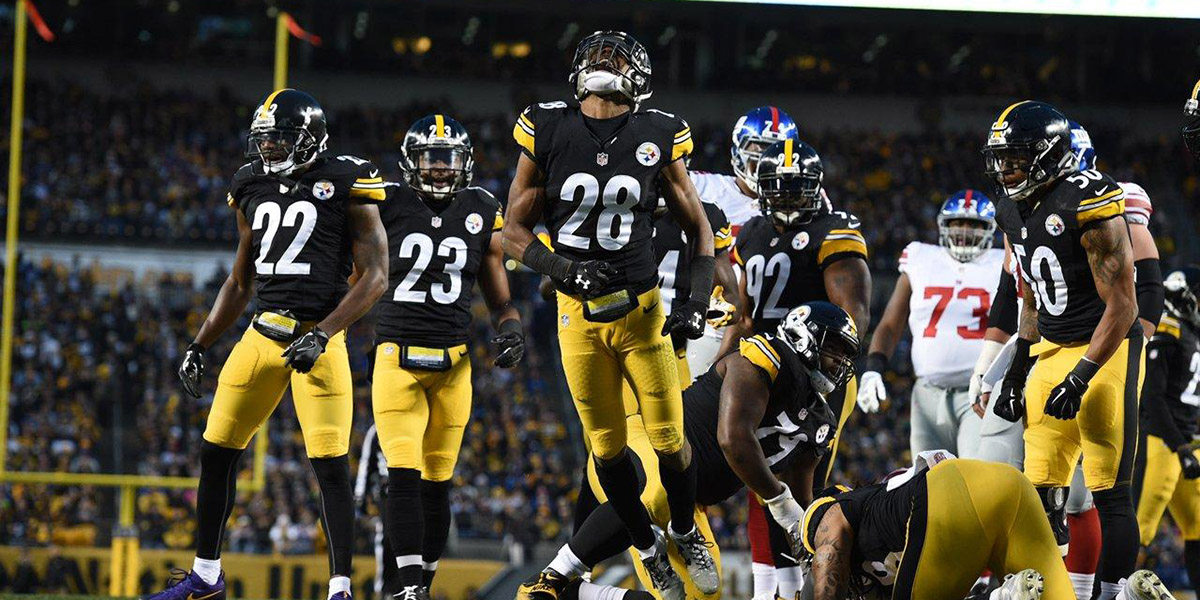 How about this three-game winning streak, Steelers Nation?

As we enjoy this winning streak, let’s take a look at how the Steelers defense dominated Eli Manning and the Giants.

One player I’m going to be talking a lot about is Sean Davis. This is was by far his “coming out game.” He was all over the place and he created many problems for the Giants offense.

On the Giants first drive, Eli Manning handed the ball off to Rashard Jennings for a run up the middle, but Sean Davis and Timmons were there in a hurry to stop Jennings for only a gain of two.

Towards the end of the first quarter, Sean Davis made another great play. The Giants were backed up in their own end zone. Manning handed it off to Perkins, but Davis came flying in and stopped him for no gain.

It was really freakin’ amazing.

See if you can find Davis on the field… he’s on the 20, playing as the deep safety on a 2nd and 14. The Giants are attempting to create some space for an easier third down conversion, but the play is blown up by Davis’ rush.

The very next play produced points for the Steelers.

Still backed up in their own end zone, the Giants ran a shotgun play; being the beast that he is, James Harrison worked Giants offensive lineman Ereck Flowers, and drew a holding call in the Giants own end zone.

The penalty occured in the endzone, which gave the Steelers 2 points and the ball back, via a safety.

It looks like I’ll be starting off the breakdown of the second quarter with another Sean Davis highlight!

Rashard Jennings ran the ball behind the right guard and was stopped for a loss of one yard by Davis.

Davis shot through the gap like a bat out of hell. (It’s really amazing.)

All of this time the Steelers are looking for Ryan Shazier to make these types of plays, and it appears that they’ve found another fast, physical player who can stuff the run.

Speaking of versatility, one thing I’d like to point out: DE Ricardo Mathews played a down standing up like a OLB. It’ll be interesting to see if Keith Butler continues to do that with him. Considering our lack of depth at the OLB position.

In the middle of the third quarter, the Giants were putting a nice drive together. They were facing a 4th and 1 on the Steelers 4-yard line.

Eli Manning attempted a pass to Will Tye, but it fell incomplete.

Ryan Shazier knocks the ball away, but Lawrence Timmons comes in smoking hot, completely shooting through the B gap unblocked. (Which is also crazy, considering Eli calls out protection on Stephon Tuitt seconds before, who is double-teamed, allowing Timmons to roam free.)

Our beloved defense kept making plays like this through out the entire game.

Mike Mitchell is another guy who had a great game. On 3rd and 7, Eli attempted another pass to Odell Beckham. The coverage was disguised, as Mitchell was with Beckham all the way, and knocked the ball down.

Mike Mitchell is becoming one of my favorites. (Jersey purchase soon?)

Who else would end up on the highlight reel again but Sean Davis. What else could be said about this guy? He made a great interception, and a great return. (The play was a good read and a bad pass by Manning, so we’ll skip the highlight, assuming you’ve seen it a few times.)

One of the major differences in this game versus games such as Dallas, is that the defense was able to close out the game. The Giants were still within two scores, a 21-7 game, when they received incredible starting field position at the 50-yard line. Beckham did some damage on the first play, gaining 25 yards, but was instantly stuffed for a 1-yard gain on the very next play (a combo tackle by Timmons and Jarvis Jones).

The defense forced two incompletions, leaving the Giants with a 4th and 9 to-go at Pittsburgh’s 24.

It was one of those plays where you’d hope the D gets to Manning, and they did.

Pittsburgh brings the house on fourth down, sending 5, and overwhelming the Giants offensive line for what became a “sack party”. Ricardo Mathews manhandles his assignment, and technically gets credited with the sack, while Timmons and Harrison get insane pressure from both edges.

As mentioned, it was great to see the Steelers defense close out this game. They had been criticized throughout the year, but the younger players are starting to get a feel for the system, and excelling at the same time. It’s an exciting period to be a fan, because the offense had been leaned upon to win games all season, yet it has been the defense getting the job down on third and fourth down. The aggression by recent teams going for it fourth down shows that opponents did not respect the Steelers defense, and the previous woes didn’t wear them thin.

They rose to the challenge, and while it’s a small sample size, we’ll sit with cautious optimism that the recent trend can continue through the final four games of the season.