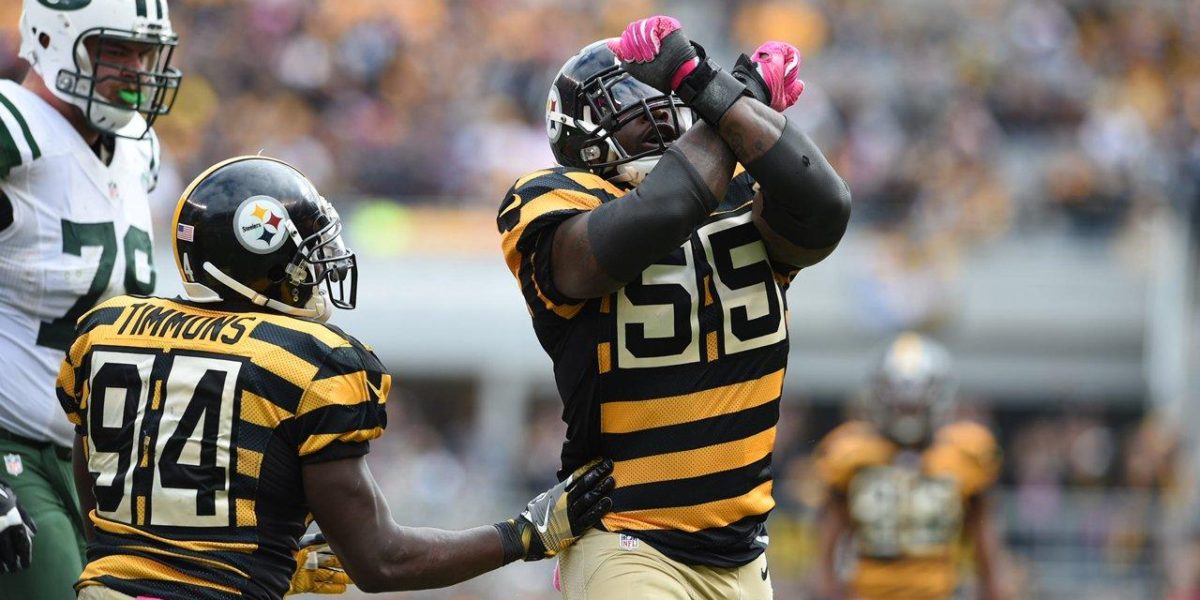 by Terry Fletcher (TerryinSoCalif) on February 27, 2017

I hope everyone is enjoying the NFL offseason.

Okay, I say that sarcastically, because I, for one, am not. It makes me think about when baseball will begin. I might tune into some NBA games… nah… why would I do that?

Yes, the NFL Draft is coming up soon, but it seems like there’s a lack of buzz right now for the 2017 class. (Maybe that will change after the Combine?)

Let’s face it: it’s boring without football. So I thought I would focus my articles over the next few weeks on giving players within the Steelers organization a spotlight, who I believe don’t normally get the pats on the back that they deserve.

One of those players is my first spotlight: linebacker Arthur Moats.

A former Buffalo Bills sixth round draft pick from James Madison, the 28-year-old has been with the Steelers since 2014, but is best known as the guy that ended Brett Favre‘s consecutive games streak at 297. He now sits deep on the Steelers depth chart, having played behind the likes of James Harrison, Jarvis Jones, and Anthony Chickillo last season. Moats was, rightfully so, bumped for Bud Dupree as well, when the latter returned from IR late in 2016.

I’m a big fan of Moats. I don’t agree with him sitting behind some of the players on the depth chart, and feel, unlike some of my colleagues, that he has a lot of upside.

In 2014, Moats was signed to a 1-year contract minimum to back up Jarvis Jones. In the first 2 games of that season, Moats had 2.5 tackles in two Steelers wins. In the very next game that season, Moats was named a starter over Jones (who was injured). In week 9, he had three combined tackles, along with a strip-sack on Ravens QB Joe Flacco. The forced fumble led the Steelers to a 43-23 win over the Ravens.

He finished that season with 23 combined tackles, 4 sacks, and 2 forced fumbles in 10 starts. His play was noticed, as he was rewarded by the Steelers the following season, with a new 3-year, $7.5 million contract, along with a signing bonus of $1.90 million. Moats would become a starter, moving from the right to the left side, playing ahead of rookie Bud Dupree. In the 2015 home opener, Moats’ 3 combined tackles and half sack led to another Steelers blowout victory.

In the final game of the year, he helped secure a playoff berth against the Cleveland Browns, racking up a season-high 6 solo tackles and registering another sack, this time on Austin Davis.

In notoriously famous AFC Wildcard Match against the Cincinatti Bengals, Moats had 5 tackles in an 18-16 Steelers win.

The remainder of 2016, and it’s season, has been an interesting story for Arthur Moats, who saw his playing time cut in half to start the season, as part of a linebacker rotation the Steelers vowed to stay away from, until, Bud Dupree landed on the Injured Reserve list. Moats was initially listed as Dupree’s back up, but started the season in place of the 2015 first round draft pick. In his first game against the Redskins, he had a single tackle and a pass deflection in Pittsburgh’s 38-16 win.

A week later, he added 3 combined tackles to his tally against the Bengals. Moats would start the first five games of the season, before making way for Anthony Chickillo, and eventually, Bud Dupree. He remained healthy for all 16 games, and participated in each of them, registering the third-most snaps of Pittsburgh’s outside linebackers.

Moats was routinely in the Steelers linebacker rotation through the November 20th game against the Browns, where once again he dominated them by getting a sack a piece on two different Cleveland quarterbacks.

Bud Dupree attempted to get on the field for the first time in that game, only receiving a single snap, but he would gradually ease his way into the Steelers defensive game plans, which also cut into Moats’ snap counts.

Arthur would find himself on the field for 1/4 of the Colts game on Thanksgiving, then dropping to 8 snaps against the Giants, before only playing one down in the Steelers next three games, and a handful in the regular season finale; in part to being eased out of a rotation along with Jarvis Jones and Chickillo (who was also banged up) in favor of Dupree and James Harrison, who dominated the late-season snaps.

With a year remaining on his contract, I feel there’s still upside for this young defender. (Yes, 28 is still young, no matter what people say!) Moats is capable of causing havoc and getting to the quarterback. He’s still productive when called upon, and could bridge the gap between an aging Harrison, and all-but-sure pass rushing draft pick at the end of April.

I appreciate what Bud Dupree has brought to the table since returning from injury, but don’t want that to diminish the contributions of Arthur Moats; not only on, but off of the football field.

Moats has been earned a Walter Payton Man of the Year award nomination with two different franchises (Buffalo 2013, Pittsburgh 2016) for his tireless work with the United Way, NFL Play 60, and his favorite charity, the Ronald McDonald House.

Even though I can see him in another back up role in 2017, the same role as he was brought in for, I feel we win when he is playing.

I say get him on the field early and often. Save James, get Bud more playing time, and let whoever is added to the roster learn from Moats.

After all, his motto says it all: Don’t Cross the Moats!