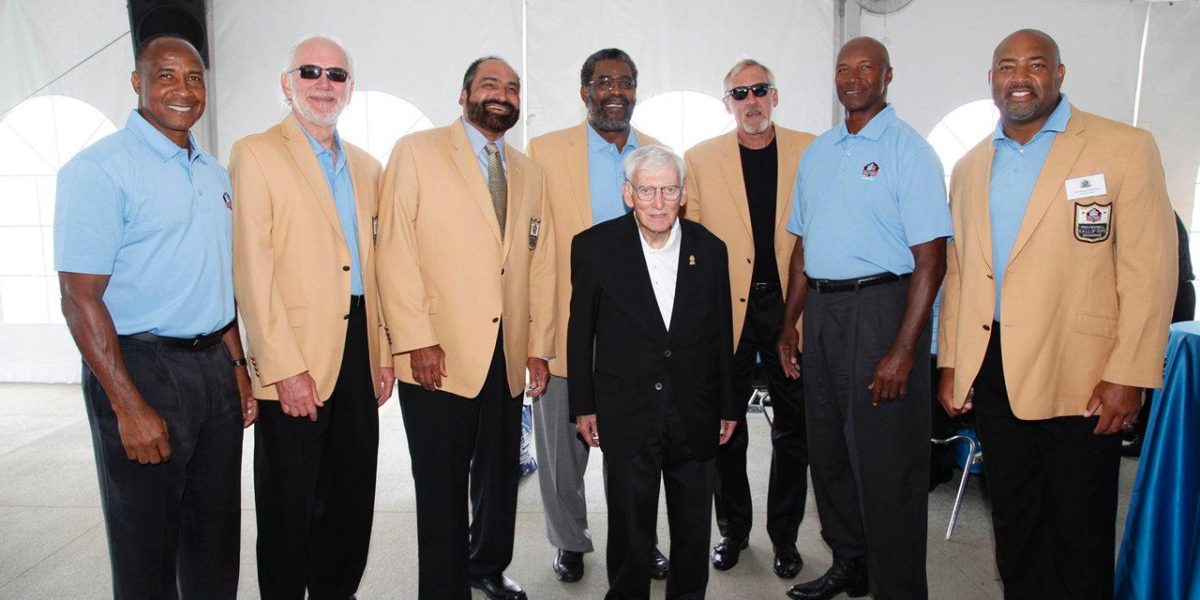 Memories of Dan Rooney from within the Steelers organization

“I used to fly with Dan Rooney in his airplane. I’d take pictures of this or that for him – of the landscape… I’d move side by side to get the pictures. When we landed I looked green, Dan said. I just told him I needed to get my feet on the ground. Chuck would go to sometimes and he told me he had an airplane seat. He said he wanted me to sit in the seat that hung outside of the plane door – and that once I got in it he’d hand me the camera! I said no! He might have been kidding… I’m not sure.”

“It was also with the support of Chuck Noll and Mr. Dan Rooney that ImPACT was not only developed but spread throughout the NFL due to Dan Rooney’s personal intercession with Paul Tagliabue informing him of the system we had developed to evaluate concussions.”

“I told him I was going to see Dan Rooney before I sign anything.  I knocked on Mr. Rooney’s door and informed him of my prognosis and he was very kind and gave me praise for my short five year career. He said that he was sorry and would do whatever he could to make sure I was ok.  I asked him about the new contract and he told me the deal was agreed to on Saturday and to get my butt across the hall and get it taken care of.

That was my proudest moment as a Steeler.”

“Pittsburgh was one of three teams that expressed interest in me.  Dan Rooney, Jr. who I still thank to this day (thank you for your belief in me Dan) was the only one that went from being interested to believing in me enough to give me a chance.  Dan wanted me to take all 270 pounds of myself to NFL Europe to get bigger and stronger, because in the NFL 310 pounds might have been the smallest lineman I’ve seen.”

‘The Steelers organization was hands down the most impressive organization I have ever been affiliated with. They care about their players, community, and fans. The Rooney’s are the type of owners that you would run through a wall for. They truly care about more than money and that is very rare in the NFL.”

“Dan negotiated my four contracts with the Steelers. I had no agent…I had no chance until my third year. I calculated why my request for a raise was justified. I devised a chart devised by using calculus. I had drawn the graphs based on my stats for receiving, 3rd down blocking and conversions and fumble recoveries. I think I confused him enough he finally gave in and gave me the raise. So to that degree, college paid off.”

“I interviewed with Dan. I’m not sure why he chose me, but I’m glad he did. It was always my desire to be a trainer for an NFL team.”

“In 1970, the Steelers moved to Three Rivers Stadium. It was Dan’s opinion that they needed to expand the staff – including PR. The Steelers had one of the smallest staffs in the league at the time, and with the league merging with the AFL, Dan knew they needed to expand the staff. The NFL-AFL merger meant more opportunities for the team and NFL. Plus, we had an antiquated stadium. They had to generate more revenue to compete and playing at Pitt stadium – that was built in 1927 and had only bleacher seating – well,  it was not even up to the standards of the current league much less the merging league.”

“When I got back Dan Rooney was President and was running the team. He gave me an opportunity and put me on injured reserve. He bought me a year. I made the Taxi Squad the following year – they wanted me to get bigger and stronger. I was then activated in ’71. I put on strength and weight, and made the team on my special teams play in ’72. We had a terrific year and won the division. In ’73 I made the team again with my special teams play. Then in ’74, during the fifth game, there was an injury and I went in and played. We went to the Super Bowl, more afterwards, 1,000 yards…”

” I am very grateful that Art and Dan Rooney along with the Steelers organization and coaching staff saw something positive in me to have drafted me as their first pick in 1968. “

“I owe Mr. Dan Rooney, the owner of the Steelers at the time, special thanks. I really appreciate how he checked on me every time I saw him downstairs.”

“Dan Rooney and his family have set the standard in the league as an outline for success.”

“Dan Rooney was given control of the team…sort of. Art was mellowing. Danny wanted to make something out of it. He was more of a ramrod kind of guy.

After the quarterback debacle, Danny spent money to get a quarterback. They drafted Hanratty but found out he was a  rollout quarterback with a weak arm. They said oh oh… So they drafted Bradshaw next year and spent a lot of money. Art would never have done that.”

“My best memories as a Steeler were the fans. I remember one day Dan Rooney asked me to accompany him downtown to a pep rally before we played the Denver Broncos in the AFC championship game. I was asked to talk about the game and also why the Steelers needed a new stadium. When we arrived, it must have been over 5,000 plus waiting to hear what we had to say. The weather was cold, but the atmosphere was great and the fans were ready!”

“Sometimes I got carried away – especially after games. I felt I had the pulse of the locker room – and Cowher usually embraced it. Dan Rooney definitely embraced it – he told me I spoke for him too.”