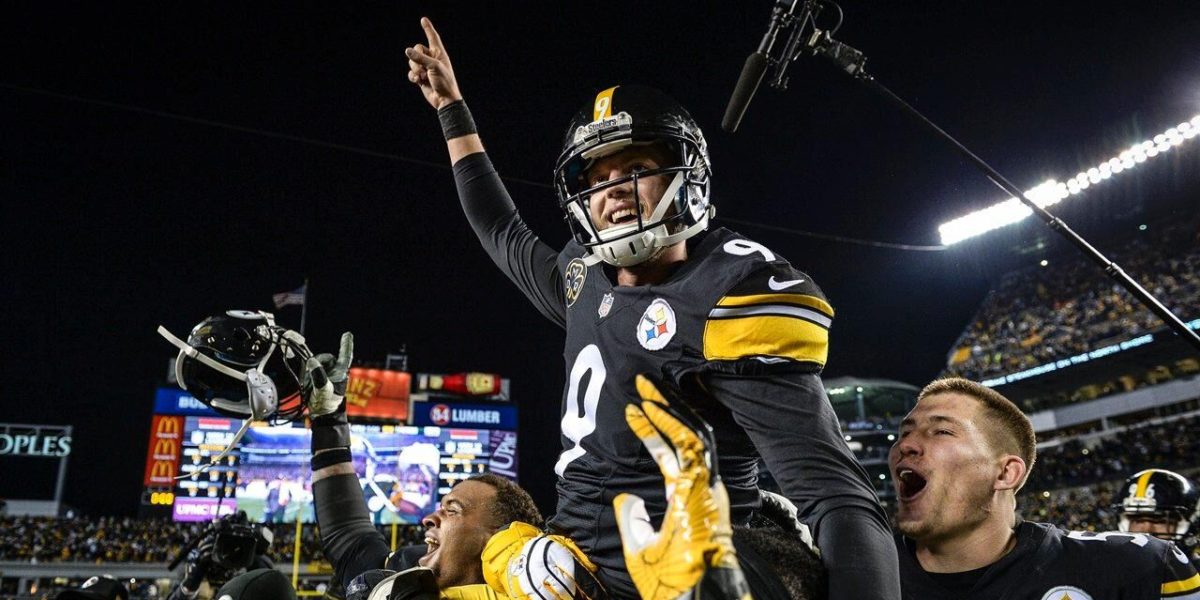 by Terry Fletcher (TerryinSoCalif) on December 7, 2017

If you ask anyone about the most productive star player on the Pittsburgh Steelers roster you will get two names that consistently come up every year; it is just assumed that wide receiver Antonio Brown or running back Le’Veon Bell should be the team MVP. These two players are not only great but also in the conversation for league MVP as well. But, what is a team MVP, and who is in the running – in my opinion – for that title for the Steelers in 2017?

First, let’s look at what “MVP” is; most valuable player. On a team, this player has value over ‘most’ others on the current roster and the team would not be as successful with or without them.

When I break it down that way, and I look at the Steelers roster, not only do I see impact players like ‘AB’ and Bell, but also Cam Heyward, Maurkice Pouncey, and even ‘Big Ben’ Roethlisberger. For me, the player that stands out this season is placekicker Chris Boswell, or as he is better known to me and much of ‘Steelers Nation’ as the “4th Killer Bee”.

What has he done in 2017 to be in consideration for this award? First, Boswell is Mr. Consistent. You know what you’re getting with Chris; just a mild-mannered, go about your business guy. He doesn’t bring any attention to himself, but you can see his teammates love him. Coach Mike Tomlin has called Boswell a very hard working guy, for a kicker. What you may miss is his impact, not only in games but during his playing time with Pittsburgh; in 2016 he was virtually the Steelers’ entire offense during the post-season and playoffs.

‘Boz’, as we like to call him, has had four game-winning field goals this year as time expired. The first game was against the Cleveland Browns (Week 1). He went on to kick the game-winner again against the Indianapolis Colts (Week 10). Against the Green Bay Packers (Week 12) Boswell hit a career-long kick, tying the Dallas Cowboys’ Dan Bailey for longest NFL field goal kicked at Heinz Field (53 yards) in its 17-year history.

On Monday Night Football, in Week 13, Boswell once again kicked the game-winning field goal against the Cincinnati Bengals with no time left after the team fought to correct a 17-point deficit to set up his kick. Bengals safety Josh Shaw burst into the neutral zone, offsides, to block the kick on the 43-yard attempt, drawing a flag and allowing Boswell to hit the 38-yarder for the win. When asked what it was like having Shaw’s feet collide with his kicking foot, ‘The Wizard of Boz’ said,

“It basically felt like I kicked the corner of a wall. I kicked the ball, which (punter) Jordan (Berry) was still holding, and then (Shaw’s) foot was at the other end of it. It was kinda my foot smashing into his foot, basically. It stung for a bit but it didn’t affect the (second) kick at all…You’re not jumping offsides that bad without just trying to run into the kicker.”

.@WizardOfBoz09's game-winning field goal on Monday Night Football was the 4th game-winning kick in his regular-season career, and his 2nd in the last two games. pic.twitter.com/DwkPYWnQVW

Still, Boswell remains focused on the ball. If the Steelers were not on the receiving end of Boswell’s success in the kicking game, they’d be like other teams out there with kickers who are struggling to put the ball between the uprights instead of heading into a showdown at Heinz Field with the Baltimore Ravens with a 10-2 record this weekend. Instead, Pittsburgh might be 7-5 and fighting for a playoff berth. Ask the Seattle Seahawks how that feels with Blair Walsh on their roster.

The Steelers got all of that from Boswell for the bargain price of $615K!

So, if there was a vote today, mine would be for Chris Boswell. Not only has he earned the title of ‘Team MVP’, but he has shown the Steelers what it means to have another weapon on the roster when you need to squeak out that win; a clear definition of what a team MVP is.