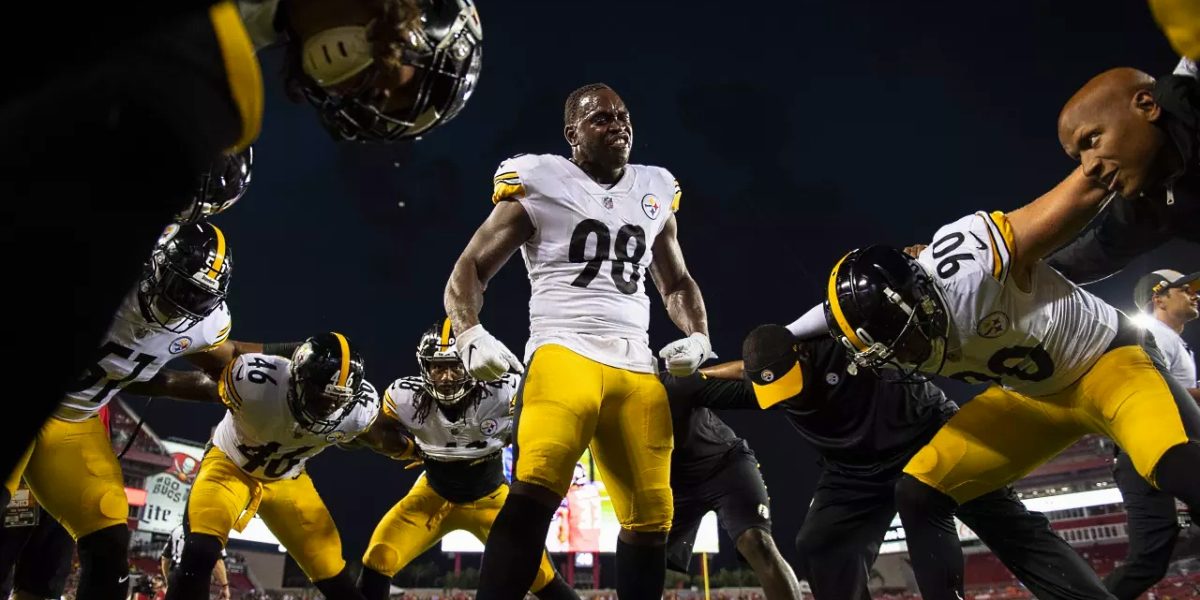 by Mike Drakulich (PghSportsNation) on September 30, 2018

Steelers and Ravens prepare for another physical battle

It is one of the most brutal and hard-hitting rivalries in all of sports. Steelers vs. Ravens.

Get the painkillers and ice bath ready when these two meet… that is if the NFL and their new nanny ways will allow it.

“We have to run up to the quarterback, pick him up and gently put him down on a Tempur-Pedic mattress,” said Steelers defensive end Stephon Tuitt.

Nearly every time the quarterback is sacked, or even touched, defensive players and fans hold their collective breaths to see if the referee is going to throw the yellow laundry onto the field for 15 yards, simply for making a play.

The nastiness of this rivalry certainly helped usher in this new era of madness bestowed upon teams nowadays.

“Steelers-Ravens is why we have safety now,” said defensive end Cameron Heyward.

Penalties aside, this is a game that everyone with a pulse looks forward to.

“It’s going to be electrifying. I can’t wait,” offensive tackle Marcus Gilbert said. “This will be an old, classic Steelers-Ravens bond. I hope everyone gets their popcorn ready for this one.”

The crowd will be ramped up in this one, especially it being a prime-time game at Heinz Field against their hated rivals.

“It’s a great environment to play,” Ravens tackle James Hurst said. “Their fans hate us, obviously. It’s fun to run out and get booed, but it’s a four-quarter game. It’s the greatest game in football.”

The Steelers will be looking to make it two straight after starting the season 0-1-1. Last week Pittsburgh held on to beat Tampa Bay on Monday Night 30-27.

“No time to pat ourselves on the back,” Pittsburgh head coach Mike Tomlin said after beating the Buccaneers. “We have AFC North football at Heinz (Field), and we respect and understand what that’s about. We didn’t give a good accounting of ourselves the last time we were at home, so we are excited to get back into Heinz Field and performing for our fans.”

Normally being known as “defensive teams”, both teams are lighting it up on the scoreboard, with the Steelers averaging 29.3 points per game and the Ravens 32.3, yet Pittsburgh quarterback Ben Roethlisberger believes his offense can get even better.

“To only have one win, I would say offensively we’re not doing our job,” Roethlisberger said. “Obviously, their secondary is very good. It starts with (safety Eric) Weddle, who kind of leads that charge now. I also think the pass rush helps the secondary. You look at pass breakups, interceptions, a lot of times that has to do with pressure on the quarterback. They’re just a really good defense all around.”

The Steelers will continue to feature James Conner, who has run for 213 yards rushing, with three scores. He also has 15 receptions for 139 yards.

One thing the Steelers had better clean up is the alarming amount of penalties they have racked up. The team has been penalized for an average of 120 yards per game.

Steelers tight end Vance McDonald had the play of the game last week in Tampa when he brutally stiff-armed Tampa Bay cornerback Chris Conte to the ground on his way to breaking loose for a 75-yard touchdown.

“I was shocked,” said David DeCastro. “I was like, ‘did that really just happen?’ I was like did everyone see that. I was stunned. I don’t get shocked by much anymore, but that was pretty impressive. That ignited the whole team.”

“It’s the only play he brought up and I think Vance got a little bit humbled, embarrassed a little bit, but what a special play,” said Roethlisberger. “I think everyone has been enjoying that. I am not a social media person, but it’s been all over the Internet.

“That’s the first time I saw it from the angle of a game film, not just TV, and to see our sideline, to me I enjoyed that as much as anything. It was fun to see the sideline get into it.”

Get ready for an old-fashioned battle between these two physical teams, but at the same time, don’t be surprised if this one ends up being a shootout in the end.

Typically, the majority of these games come down to the 4th quarter, if not the final drive. Both teams know each other’s tendencies better than any other. There will be hits, there will be trash talking, and you can count on plenty of penalties, especially with how the NFL is making refs managed the game now, which is to say, terrible. This is a man’s game. it is a collision sport played by some of the best athletes in the world. What is being asked of some of these defensive players borders on lunacy.

Ball security will be huge in this one, and if the Steelers do manage to get up quick in this one, they need to acquire a killer instinct, unlike last week when both the offense and defense went to sleep in the 2nd half and almost witnessed the Bucs pull an impossible comeback.

It’s a Sunday Night game, and this is when Ben Roethlisberger plays his best. Big Ben is 21-3 in regular season primetime games, throwing for 6,830 yards, 55 touchdowns, and 16 INT’s.

A Look At The Pittsburgh Steelers

Ben Roethlisberger is looking to have one his best seasons yet. Big Ben’s big arm, along with his uncanny ability to slip out of the pocket and extend plays makes him one one of the league’s best.

Le’Veon Bell is one of the league’s best backs. He is dynamic in both running and catching the ball out of the backfield, but until he signs his contract and reports to the team… who cares? James Conner is more than capable of shouldering a starters share of carries. He has slimmed down and has added speed and quickness to an already powerful running style. Jaylen Samuels is an H-Back type of player that can line up all over the field. He is especially dangerous catching passes out of the backfield. Steven Ridley is a capable runner that can be counted upon on an as needed basis.

What more can you say about Antonio Brown? He is the league’s best wide receiver. His dedication and drive to be the best is unmatched by any player in the league. JuJu Smith-Schuster heads into his 2nd season and looks to make even more of an impact than he made as a rookie. Speaking of rookies, James Washington was a Camp favorite of Roethlisberger, and could quickly establish himself as a dangerous weapon in the slot as the 3rd receiver. Justin Hunter is a nice deep threat. Darrius Heyward-Bey is mainly used on special teams. Ryan Switzer will see time in the passing game at times, but his value is best used in the return game.

Jesse James is reliable as ever. Vance McDonald is looking to make a big impact in his 2nd year as a Steeler, looking to build off a 10-catch, 112-yard day in a postseason loss to the Jaguars. Xavier Grimble provides a big target for Roethlisberger in the Red Zone.

The linebacker unit goes Bud Dupree and T.J. Watt on the outside, with Vince Williams and Jon Bostic in the middle. Anthony Chickillo and Matthew Thomas back-up Dupree and Watt, while L.J. Fort and Tyler Matakevich are reserves in the middle.

In the secondary, Artie Burns and Joe Haden are the starters at cornerback. Backing them up will be Mike Hilton, Cameron Sutton, and Coty Sensabaugh. Rookie Terrell Edmunds starts at strong safety, with Morgan Burnett backing him up and seeing plenty of action in nickle and dime formations. Sean Davis is the starter yet again at free safety, with Nat Berhe and Marcus Allen as reserves.

A Look At The Baltimore Ravens

Joe Flacco is having a pretty good 2018 season. The strong-armed QB has thrown for 889 yards with six TD’s and just two INT’s.

Alex Collins is the lead back with just 132 yards rushing so far and two scores via the ground. Buck Allen is sneaky out of the backfield and a goal-line vulture. Allen has recorded 11 receptions for 70 yards and a TD. He’s managed three TD’s rushing.

John Brown is the team leader with 222 yards through the air and two touchdowns. Michael Crabtree has 15 receptions and one TD. Willie Snead IV is the team’s 3rd wide-out and has 12 catches for 142 yards. Chris Moore is rarely utilized.

Mark Andrews leads the position with eight receptions, along with 107 yards receiving and one score. The Ravens also employ Maxx Williams and Nick Boyle, who have a combined 13 catches for 136 yards and no scores.

The Ravens are back to playing tough defense, allowing just 17 points per game. They have been excellent vs the pass, giving up just 169.3 yards per game. They haven’t exactly faced Murderer’s Row for quarterbacks, as they’ve played vs Nate Peterman and Case Keenum…