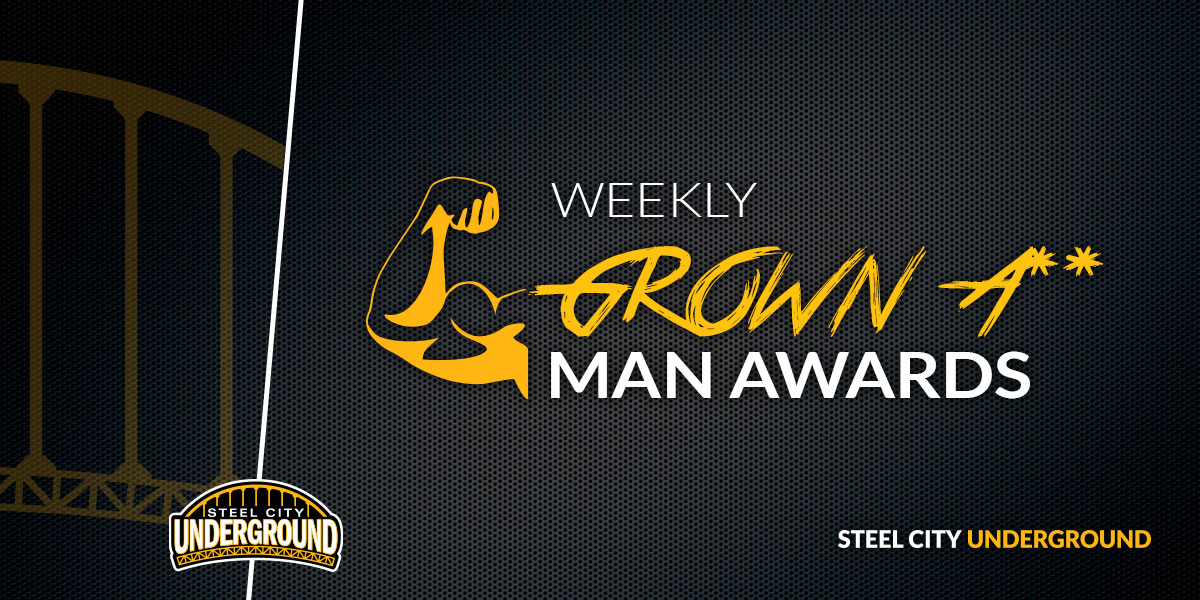 That is a Grown Ass Man.

Who stood out in the Steelers contest against the Browns? Who rose above and elevated their level of play to the status of Grown Ass Man? Let’s find out in this weeks GAM Awards.

I honestly can’t say enough about James Conner’s performance Sunday. It was more than just what he did running and catching the ball, it was his entire attitude. His physicality is contagious and it carried through the entire team. If he can carry that productivity and physical style of play through the rest of the season this will be a scary team. James Conner is most definitely a Grown Ass Man!

Alejandro Villanueva and the Offensive Line

The line (and the team) had a bit of a stumbling start. Villanueva got abused by Myles Garrett early in the game, which lead to a sack on Ben Roethlisberger. But after that, the entire line and especially Big Al solidified and came together keep Ben clean and opening up gaping holes for James Conner. For the second week in a row the O line was physical, nasty and dominant, and Big Al stood out to me because he had to contend with the best young pass rusher in the game in Myles Garrett.

It’s actually pretty easy to overlook just how well Joe Haden has been playing. For corners, when your name isn’t mentioned, it usually means you’re doing your job well. On the other hand, you can put your name into the conversation by doing what Joe Haden did, and skying for a huge interception. He’s having a Pro Bowl level year so far. What really puts Haden in the GAM’s though is the way he challenged a very physical receiver in Jarvis Landry, forcing a loss of yards more than once on a completed pass. Joe Haden is a Grown Ass Man!

Stephon Tuitt was a beast Sunday. He was absolutely collapsing the pocket and perusing relentlessly throughout the game. That’s the guy we need to see every week. He picked up his first sack of the year and is probably still rumbling through the dreams of the Browns offensive linemen. Stephon Tuitt is a Grown Ass Man!

Vance McDonald was considered as well, but even though he did pull a bit of the Vanimal act out and ran over a few Browns, it kind of paled in comparison to Conner. Still, it was a solid game. T.J. Watt was also considered, but even though he shared the lead for tackles and had another sack it just wasn’t enough.

Tell us what you think? Who do you believe should have been given a “Grown-Ass-Man” award?