by Mike Drakulich (PghSportsNation) on December 2, 2018

In the never-ending world of, “Did you hear what he said??”, a ploy used by many media platforms to create controversy and chaos, Antonio Brown and Juju Smith-Schuster are having none of it.

On Ben Roethlisberger‘s radio show this week, Big Ben wasn’t shy in explaining a few mishaps in his team’s play against the Denver Broncos last week, a game in which the Steelers lost 24-17.

It was a game this team had no business losing. Back-breaking turnovers inside the Red Zone ultimately lead to the snapping of the Steelers six-game winning streak.

“In the world we live in today, I think controversy is celebrated a lot,” Brown said. “People try to put people against each other, bring people down. But we all need each other. There’s power in unity and people coming together, and not in people fighting and bringing each other down.”

Brown was responding to the narrative pushed that Roethlisberger wouldn’t say who his #1 receiver was on the team.

“It’s not personal the way you guys (in the media) make it,” Brown said. “You guys make big stories. That’s my guy. I love him. I got his back no matter what’s said. Everything he said is gonna encourage us to get better.”

Neither Brown or Smith-Schuster were dismayed to hear a little criticism given out by the team’s leader and the only player left on the roster who has won a Super Bowl.

“We have a lot of good history together, and we will continue to make history,” said Brown. “We have that relationship where we challenge each other, we encourage each other. That’s the situation you wanna have with your quarterback.”

With Roethlisberger at quarterback, Brown has set, and continues to set receiving records from the throws of his main guy, and if Ben gets critical at times…

“I got big shoulders. I can take it,” Brown said. “Constructive criticism (is) only for you to get better. It’s only made to challenge, only made to make you better. And that’s my guy.”

Another issue that Brown is not fazed by is the play by his fellow wide-out in Smith-Schuster, who leads the team with (77 receptions and 1,055 yards receiving).

“He wants to be great; he’s just inspired by the game, and he wants to be the best – and that’s what makes him so special,” Brown said. “It means something to him; you can tell by the way he works and the way he goes about his business. He loves the game.”

Brown, at the moment, is ranked ninth in catches and just 12th in receiving yards. He is a player that always strives to be the best.

“AB takes it as, ‘I’m a sixth-round draft pick… I hate you all anyways because you all hate me,’” veteran teammate Darrius Heyward-Bey said. “Even the Steelers, he looks at it like, ‘You guys didn’t draft me in the first round, either.’ And that’s what makes him great, that’s what makes him a Hall of Famer because he has that chip on his shoulders.

“If (Roethlisberger) thinks it motivates (Brown), great. But you’re going to get the best out of him. (Brown) is going to come out giving his best anyways.”

It won’t be easy against a better than you think Chargers defense, but the Steelers should be pretty focused and pumped up to atone for last week’s debacle vs Denver. Ben Roethlisberger and the Steelers always seem to elevate their gameplay when the lights come on at Heinz Field, and it hard not to ignore the Chargers garish record when playing at Pittsburgh (1-14)…

One key to getting back on track is creating some turnovers, a stat not lost on the Steelers defense.

“The library is very low. We’ve got to read up on some books,” safety Terrell Edmunds said.

The Steelers have taken the ball away from opposing offenses only 14 times this season, six via interception.

“Joe just started saying we need to get some books, and he was talking about interceptions, so we said, ‘You know what, let’s start calling it books,'” corner Mike Hilton said. “We’ve got to get books this Sunday.”

Phillip Rivers has only thrown six interceptions so far in 2018. Still, one characteristic that Rivers has always displayed hasn’t gone unnoticed by the Pittsburgh secondary…

“Philip likes to throw the 50-50 ball and let his guys make plays,” Hilton said. “Basically, he feels: Our guy is better than you. He’s giving his guys the chance to go get it. As a defense, that gives us more opportunities. We have to take advantage of it.”

The Steelers defense has been better than expected, ranking 12th in total points allowed, but 7th in total yards against.

“We’ve been doing our thing and winning, but that splash play is going to take us to the next level,” Edmunds said. “The next level where everybody’s talking about us.”

Ben Roethlisberger has been on fire during the Steeler’s winning streak. Big Ben’s big arm, along with his uncanny ability to slip out of the pocket and extend plays makes him one of the league’s best.

Le’Veon Bell who? James Conner has shown he is more than capable of shouldering a starters share of carries. He has slimmed down and has added speed and quickness to an already powerful running style. Conner has become a dual threat and is one of the best RB’s in the NFL. Jaylen Samuels is an H-Back type of player that can line up all over the field. He is especially dangerous catching passes out of the backfield. Steven Ridley is a capable runner that can be counted upon on an as-needed basis.

What more can you say about Antonio Brown? He is the league’s best wide receiver. His dedication and drive to be the best is unmatched by any player in the league. JuJu Smith-Schuster heads into his 2nd season and has picked up where he left off. Speaking of rookies, James Washington was a Camp favorite of Roethlisberger, and could quickly establish himself as a dangerous weapon in the slot as the 3rd receiver. Justin Hunter is a nice deep threat. Darrius Heyward-Bey is mainly used on special teams. Ryan Switzer has been good in the return game but has also established himself as a reliable target for Roethlisberger out of the slot.

Jesse James is reliable as ever. Vance McDonald is making a big impact in his 2nd year as a Steeler, often delivering punishing hits while being tackled. Xavier Grimble provides a big target for Roethlisberger in the Red Zone.

The linebacker unit goes Bud Dupree and T.J. Watt on the outside, with Vince Williams and Jon Bostic in the middle. Anthony Chickillo and Matthew Thomas back-up Dupree and Watt, while L.J. Fort and Tyler Matakevich are reserves in the middle.

In the secondary, Artie Burns and Joe Haden are the starters at cornerback. Backing them up will be Brian Allen, Mike Hilton, Cameron Sutton, and Coty Sensabaugh. Rookie Terrell Edmunds starts at strong safety, with Morgan Burnett backing him up and seeing plenty of action in nickel and dime formations. Sean Davis is the starter yet again at free safety, with Jordan Dangerfield and Marcus Allen as reserves.

A look at the LA Chargers!

Phillip Rivers is on fire this year, passing for 3,119 yards and 26 touchdowns. He is adept at spreading the ball around from his wide receivers, to his tight ends, and his backs.

Melvin Gordon is leading the team in rushing but is out with a knee injury. Austin Ekeler and Justin Jackson will do their best to fill the void left in Gordon’s absence.

The Chargers defense is stingy, only allowing 19.9 PPG. They have gotten to the opposing QB 29 times and have created 14 turnovers. 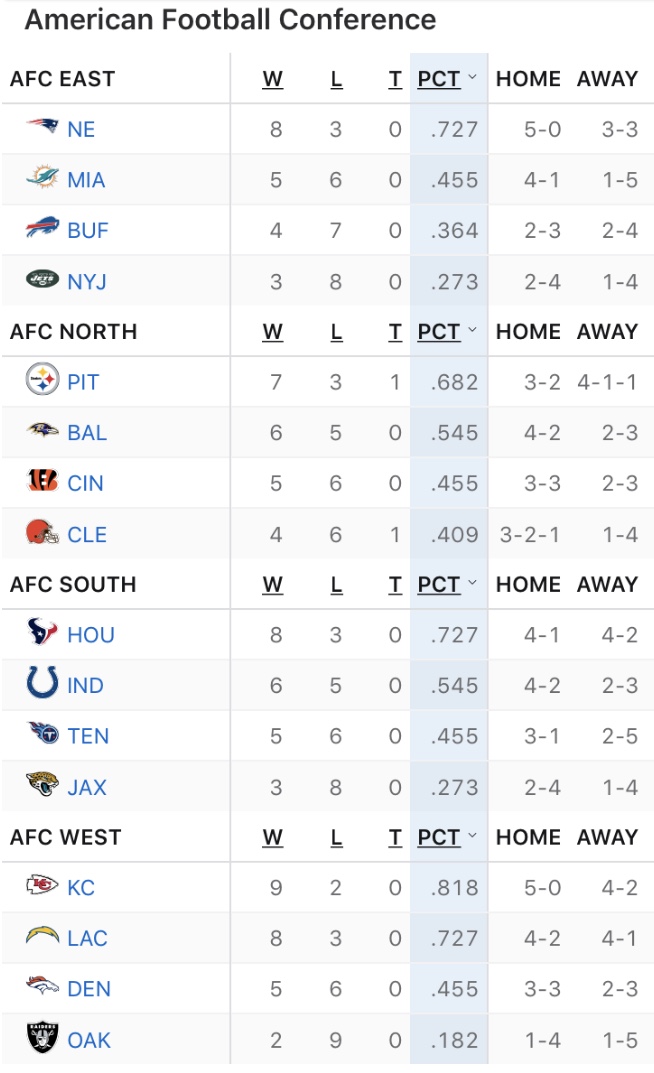 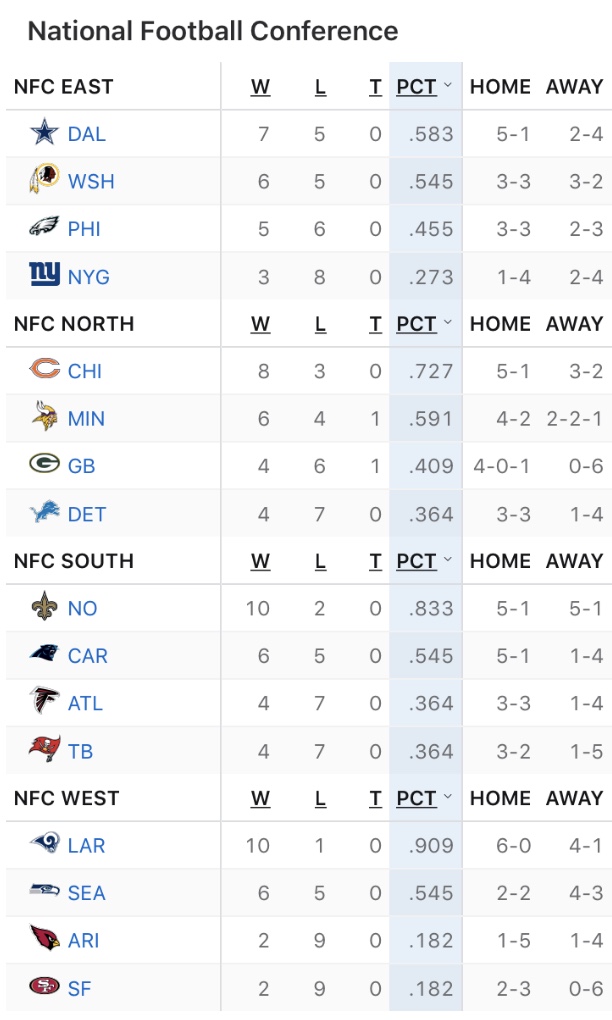