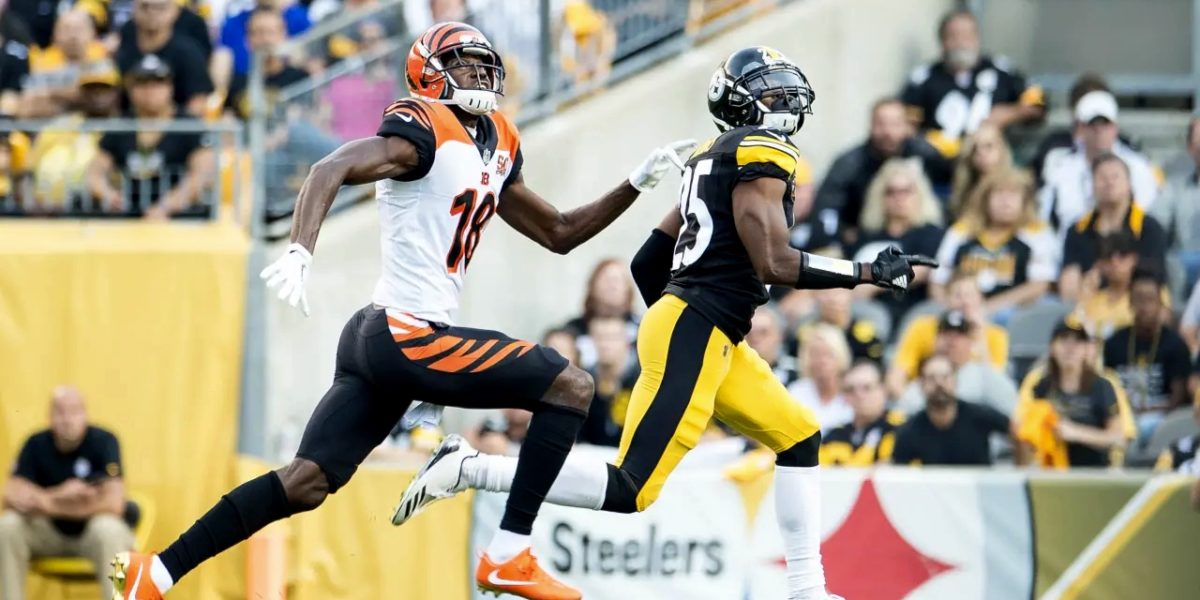 by Mike Drakulich (PghSportsNation) on December 30, 2018

When the Pittsburgh Steelers (8-6-1) take on the Cincinnati Bengals (6-9) this Sunday at Heinz Field, many eyes will be watching the game take place on the field… and also glancing at the scoreboard for updates concerning the Ravens and Browns.

Don’t count on Ben Roethlisberger to be one of them.

“I don’t care,” the Steelers quarterback said. “I don’t really care what’s going on outside of Heinz Field. It’s all I can control, so it’s all that matters to me.”

The Steelers will need to dispatch the Bengals, and then hope Cleveland can somehow pull off the upset in Baltimore for them to make the playoffs and win the AFC North Division.

“I am gonna focus on this game (against the Bengals),” Roethlisberger said. “That’s all that really matters to me because if we don’t care of our business, nothing else matters.”

It won’t be easy to forget the failures that have put Pittsburgh in this predicament, but it is what it is, to quote head coach Mike Tomlin. Roethlisberger and the team can only control what they can, and defeating a wounded Bengals team is all they can do.

“Just treat it like a normal week,” Roethlisberger said. “We have got a big game, an AFC North opponent. If you have to psyche yourself up to get yourself ready for that game, there’s something wrong with you.”

James Conner looks as if he will return after a three-game absence, but don’t look for Jaylen Samuels to go back into the shadows with Conner returning to the starting role at running back. After his performances the past few games, Samuels has earned a spot in Pittsburgh’s vaunted offense.

“No doubt he has,” offensive coordinator Randy Fichtner said. “There was a spot we were originally trying to work him in also to be able to do: be that back who could give you some more dimension in the passing game, maybe take some situational football off of James’ hands, being a primary ball-toter.

“It would be great if (Samuels) could do that, and he’s proven that he can do that.”

While Conner was out, Samuels rushed for 223 yards and had 105 yards receiving.

Now the Steelers have to win this week and pray to God the Browns can save their ass by taking care of the Ravens for the 2nd time this year. It’s either that or bye-bye 2018 season.

Will it happen? The odds say no, but with how crazy the NFL has been this year, don’t bet against it.

This is a game where Ben Roethlisberger and the offense has to come out swinging and knock the Bengals out early. Cincinnati is looking for any reason to tuck tail and run in this one, so unless the Steelers are dumb enough to let them hang around and garner any hope at all, this should be over early. Vegas certainly thinks so spotting the Bengals 16.5 points in this one.

”It’s out of our control,” Pittsburgh guard David DeCastro. ”You’re going to feel a lot worse than you do now if you were to go out there and see Baltimore lose and us lose too. It’s definitely deflating (to be in this position). It’s been a long season. We’ve put forth a lot of effort.”

Andy Dalton is out. A.J. Green is out. Tyler Boyd is out. Dre Kirkpatrick is out. Vontaze Burfict is out. And yes, Keith Butler, Tyler Eifert is out.

No more excuses. There is no control over your destiny. The only option is to lay the wood to a team that is missing half of it’s starting roster… then hope Cleveland saves your bacon and you are granted a second chance at accomplishing your preseason goals and Super Bowl dreams.

Ben Roethlisberger’s big arm, along with his uncanny ability to slip out of the pocket and extend plays makes him one of the league’s best.

Le’Veon Bell who? James Conner has shown he more than capable of shouldering a starters share of carries. He has slimmed down and has added speed and quickness to an already powerful running style. Conner has become a dual threat and is one of the best RB’s in the NFL. Jaylen Samuels is an H-Back type of player that can line up all over the field. He is especially dangerous catching passes out of the backfield. Steven Ridley is a capable runner that can be counted upon on an as needed basis.

What more can you say about Antonio Brown? He is the league’s best wide receiver. His dedication and drive to be the best is unmatched by any player in the league. JuJu Smith-Schuster heads into his 2nd season and has picked up where he left off. Speaking of rookies, James Washington was a Camp favorite of Roethlisberger, and is starting to show flashes of becoming a dangerous weapon as the 3rd receiver. Eli Rogers is back and is excellent out of the slot. Darrius Heyward-Bey is mainly used on special teams. Ryan Switzer has been good in the return game, but has also established himself as a reliable target for Roethlisberger out of the slot.

Jesse James is reliable as ever. Vance McDonald is making a big impact in his 2nd year as a Steeler, often delivering punishing hits while being tackled. Xavier Grimble provides a big target for Roethlisberger in the Red Zone.

The linebacker unit goes Bud Dupree and T.J. Watt on the outside, with Vince Williams and Jon Bostic in the middle. Anthony Chickillo and Olasunkanmi Adeniyi back-up Dupree and Watt, while L.J. Fort and Tyler Matakevich are reserves in the middle.

In the secondary, Coty Sensabaugh and Joe Haden are the starters at cornerback. Backing them up will be Artie Burns, Mike Hilton, and Cameron Sutton. Rookie Terrell Edmunds starts at strong safety, with Morgan Burnett and Jordan Dangerfield backing him up and seeing plenty of action in nickel and dime formations. Sean Davis is the starter yet again at free safety, with Brian Allen and Marcus Allen as reserves.

A look at the Cincinnati Bengals!

Jeff Driskel has done his best with a wounded line-up. He’s… not very good.

Joe Mixon is the starter and has had a solid year. He has rushed for 1,063 yards with eight touchdowns. Giovani Bernard is more of a pass catching threat out of the backfield.

A.J. Green is normally the Bengal’s top guy, but he is injured… Tyler Boyd has broken out this year for 76 receptions, good for 1,028 yards and seven scores…and he is injured. John Ross has had a nice rookie season with seven touchdown catches. Alex Erickson and Cody Core make up the rest of Cinci’s options at WR.

C.J. Uzomah has done a good job in place of the oft-injured Tyler Eifert. Uzomah has 42 catches for 433 yards.

The absolute worst in the league, giving up 29.3 points per game. 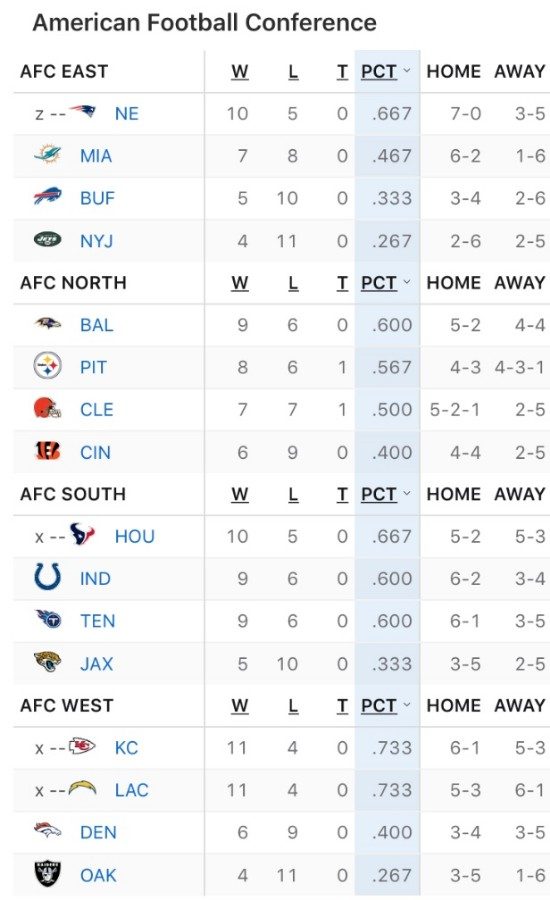 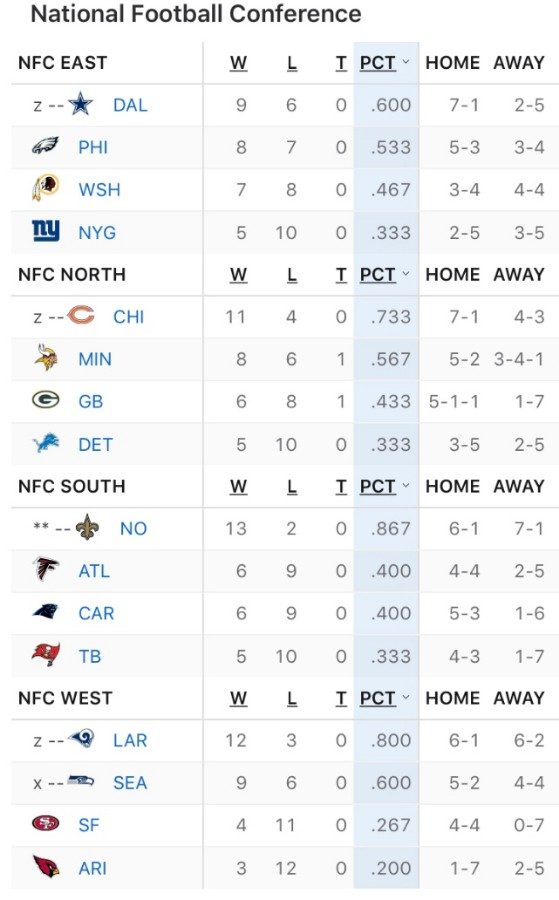