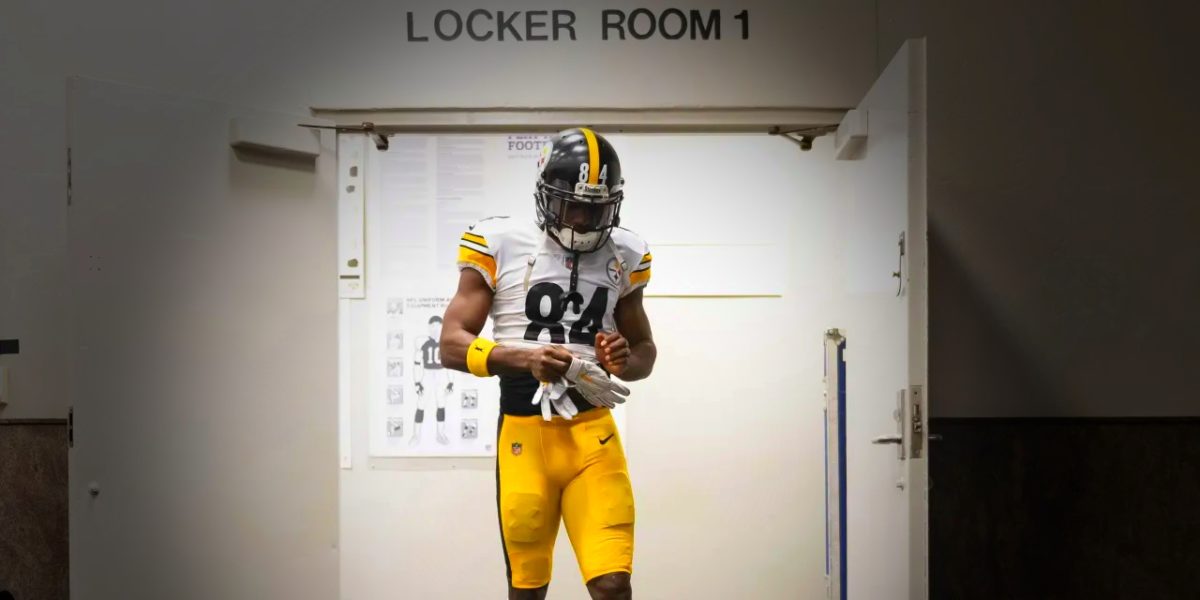 Did we miss the warning signs with Antonio Brown?

Football is the ultimate team sport. It brings together a family bond unlike almost anything else in sports. The feeling of knowing that the man next to you has your back as you go into battle on the football field gives you the power to keep pushing forward, to never quit, and never let your teammates down.

But as the legendary Vince Lombardi once said, “Once you learn to quit, it becomes a habit.”

As 2018 came to an end, so did the Steelers’ suddenly disappointing season and any chance at postseason glory. Like clockwork, the drama that has seemingly followed the Steelers everywhere in recent years reared its ugly head yet again, this time in the form of Antonio Brown. The theme of this drama? The concept of “quitting.”

In the past two weeks, multiple stories have circulated in the media regarding what actually transpired between Wednesday, December 26 and Sunday, December 30. In a previous article here at SCU, Joe Kuzma gives a detailed account of the events that led to where we stand today in probably one of the few places where everything is laid out in one spot. If you haven’t had a chance to read it, I’d recommend doing that before getting too far along as to prevent any confusion.

While this entire Brown situation seems like a straightforward case of a player simply failing to communicate properly with his team, conflicting stories add to the complexity of the bigger picture. Per multiple reports from players, a shouting match took place with a “teammate” (later determined to be Ben Roethlisberger) with continued reports that Brown had “implied” in the heat of the argument that he wanted to be traded. Some teammates later went on to indicate to reporters that they felt Brown was faking his injury and had simply “quit” on the team in arguably the biggest weekend of the season.

Again, there is that theme of “quitting.”

With so many angles to look at with this entire situation, it is difficult to say what is right and what is wrong. Throughout the continued developments with the drama, I have tried to stay as neutral as possible, a practice I conduct regularly with many aspects in life and football. I feel it is best to not overreact until the dust has settled and we get facts rather than speculation.

This feels different, though. The more I sit back, the more I feel as though the writing has been on the wall for quite some time.

And we all simply missed it.

In recent years, we have seen incidents that we all likely wanted to view as isolated with no real portrayal of a bigger issue. While Brown has done plenty of good, the headlines do not always paint a pretty picture:

Players are human and humans make mistakes. But when they occur in a way that a pattern begins to occur, personality traits can begin to appear.

In the world of football, certain positions have stigmas of being labeled “divas.” Some take this as a term of endearment while others try to deny it until they’re blue in the face. The Steelers have had their fair share over the years, with most recently the trio of Roethlisberger, Le’Veon Bell, and Brown falling into this category by some fan and media perspective. Contrary to popular belief, being a “diva” doesn’t make you a bad teammate or a “quitter.”

Previous flirtation with retirement and the occasional negative PR aside, I believe that Roethlisberger’s appearance as a “diva” but not a “quitter” stems from his willingness to consistently put the team first. Yes, he has thrown teammates under the bus on his radio show and has stirred the pot at unnecessary times. But we’ve also seen the veteran quarterback have disastrous games in which the team wins and he says something along the lines of “I need to play much better, but we at least still came away with the win.” The very next week you’ll see him throw for along the lines of 350 yards, 3 touchdowns, and no interceptions in a game that the Steelers lose and he’s the first person to be frustrated off at the outcome. The personal stats get thrown to the side because the one stat he cares about more than anything is getting a “W” in the win column.

Maybe it’s just me and maybe the emotions are still fresh, but I don’t always feel that way with Antonio Brown.

In recent memory, we have witnessed countless outbursts from the All-Pro receiver when he doesn’t get the stats he would prefer or another player seemingly outperforms him in a solid team victory. You would think the team win would be the first thing on his mind, but alas, you later hear reports about him not being happy with how little he saw the ball that week. Then there are moments where he has career days in a Pittsburgh loss that seem to barely impact him. We saw this as recently as the Saints game, but also at times throughout the past few seasons.

When the events that have reportedly transpired over the past two weeks take place, it is often hard for teammates to not view them as “quitting,” particularly when actions indicate as much and certain aforementioned comments are made. When you play for a team, the chemistry and brotherhood can often outweigh the talent and help take teams to heights unimaginable. Multiple players, namely Vance McDonald and Bud Dupree, all expressed that at times, the chemistry in the locker room was not where it needed to be. If you look back at virtually any of the Steelers’ Super Bowl teams, you felt that each player was there for the right reasons. You could trust the men next to you. You can still be a diva all you want to be. But you can still be a great teammate and accountable as a person and a player. Not calling communicating with your coaches, missing meetings and practices, making excuses, and causing constant headaches for those around you doesn’t always give the image of being a good teammate and I fear this is where Brown is beginning to slide to in the eyes of his teammates. Quite frankly, I’m not sure how easily those wounds can be healed.

I love AB. He makes the team better on the field for sure and I am truly grateful to be living in this era to witness his magic on game day. This is not to say that Brown doesn’t completely care about the team, nor am I trying to take away from anything he has accomplished. AB is often considered one of the hardest workers in the NFL. Growing up with a difficult life, fighting homelessness, getting overlooked by college programs and NFL teams, and becoming one of the great receivers in NFL history is nothing short of incredible. The odds have always been stacked against him but he still prevailed. But that also doesn’t excuse anything that has happened in recent memory with the Steelers off of the field. I am not, never have been, and never will be, a “me first” person. The team should almost always come first. Whether that is truly how AB feels is hard to say, but from the outside perspective, it would not appear that way. Coming from a star player, that is not a good thing for a team.

The Steelers have been notoriously good at keeping these stories covered up better than almost any other team in the league. But then when moments like this happen, the truth all comes gushing out at once. And it takes a while to sort through it because of the sheer magnitude of it all. Maybe I’m naive, but I’m inclined to believe that what we are all hearing is mostly true in one way or another. I believe that Brown might have had an altercation at practice, complained of knee soreness to potentially get out of playing if he was truly disgruntled with the team and what occurred on Wednesday, promptly did not show up for meetings, and left at halftime. Deep down, I also believe that Brown is likely more at fault than fans might want to admit. I have no idea what will happen with Brown and his future with the Steelers. He has done so much for the team on the field, but perception is a massive factor in the NFL that can sometimes damage beyond repair. It can wear a team down and bring you to a point that the constant noise and abandonment isn’t worth the talent anymore. As Cam Heyward put it in an interview with WDVE, “We all want AB here, but to be a part of this team, you can’t do that. You don’t let your brothers down.”

I think the writing has been on the wall for quite some time.

And we all simply missed it.

2 responses to “Did we miss the warning signs with Antonio Brown?”