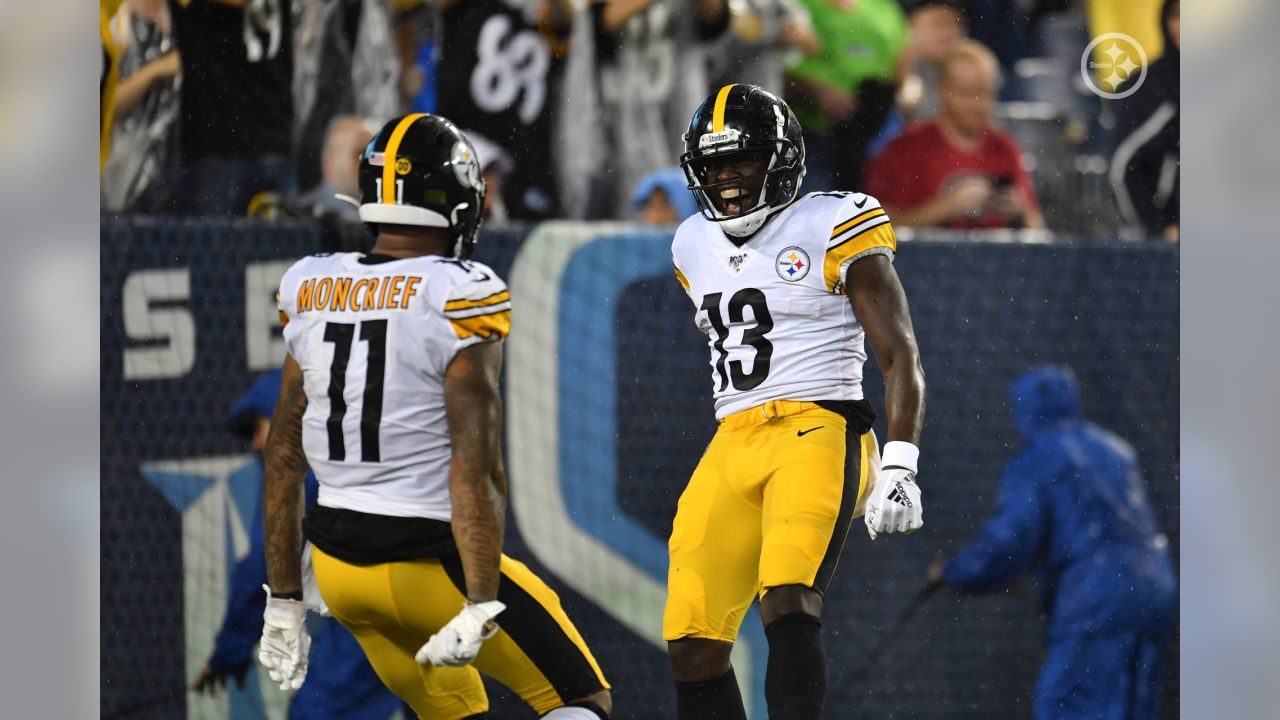 Steelers fans, we are just one week away from the start of the 2019 regular season! Thursday is the final game of the preseason and then the real thing starts. For their final preseason matchup, the Steelers will look to finish 4-0 with a win over the Carolina Panthers. The Panthers are 1-2 in the preseason, coming off a 10-3 loss to the Patriots. With this being the final preseason game, it isn’t likely that many starters, if any, will play. That will make it hard to make a true prediction on this game. With that being said,  I want to take a look at some position battles on the Steelers to keep an eye on this week.

Dobbs was the QB2 last season WR but things look to have taken a turn. This is due to the fact that Rudolph has taken huge strides and has impressed this preseason. He has thrown for 243 total yards, three touchdowns, and an interception. Meanwhile, Dobbs has more passing yards with 259 but hasn’t thrown a single touchdown and has thrown two interceptions. He has impressed more as a runner than a passer.

If the season started tomorrow, Rudolph would win this battle. With that being said, Dobbs could be playing to show other teams that he has potential as a true QB2 as well. The rumor is that the Indianapolis Colts would be interested in a trade after the Andrew Luck retirement. If Dobbs plays well this week, other teams could possibly show interest as well. The Steelers will keep both Dobbs and Rudolph on their roster but if the price is right, they could very well move Dobbs.

Who is WR2 behind JuJu?

Obviously, Juju Smith-Schuster will be the Steelers top target and WR1 this season after the departure of Antonio Brown. The question is, what does the receiver depth chart look like behind him? The first receiver that comes to mind is second-year wide receiver James Washington. After struggling in his rookie season, Washington has shown why the Steelers drafted him this preseason. Washington has caught nine passes for 203 yards and two touchdowns so far. He has showed that he is a huge threat in the deep passing game and can also make the tough catches.

The next name in the battle is newly acquired wide receiver, Donte Moncrief. The thing that helps Moncrief’s case is that he is a proven veteran with several successful seasons with the Colts, along with a brief (less successful) stop in Jacksonville. He is another receiver that has the deep speed and can be a true vertical threat for the Steelers.

Behind them will be rookie Diontae Johnson, along with Ryan Switzer and Eli Rogers being the most likely to take the final roster spots at receiver, Diontae Spencer and Johnny Holton have also made their cases for a roster spot during the preseason,

Another thing to watch will be at the tight end position. Vance McDonald will be the obvious TE1 but the depth behind him as questionable. Xavier Grimble has shown instances where he can be a TE2 but there isn’t much behind him. Rookie Zach Gentry is the TE3 as of now. With that being said, I wouldn’t be surprised if the Steelers make a late trade of signing for a tight end.

On the defensive side of the ball, the starters are pretty set in stone. However, there are some key battles to watch as far as the backups go.

The first battle to watch is in the linebacker group. At inside linebacker, Vince Williams, Devin Bush, and Mark Barron are all locks to make the roster. After them, it is likely that the Steelers take one more inside linebacker. The battle will be between Tyler Matakevich and rookie Ulysees Gilbert III, who has impressed this preseason.

At outside linebacker, Bud Dupree and T.J. Watt are the obvious starters. Behind those two, Anthony Chickillo should make the roster, leaving one or two spots left. Rookie Sutton Smith will be in the discussion as they had hopes for him to contribute. The other two names to watch are Ola Adeniyi and Tuzar Skipper. Adeniyi recently had surgery, so this should open up opportunities for Skipper to prove himself.

The final position battle to watch for the Steelers is at the back up free safety behind Sean Davis. The front runner going into the offseason would’ve been second-year player Marcus Allen. However, there has been a new name to come into the picture. Former AAF player, Kameron Kelly, has become a favorite of the coaching staff as he has been very impressive during the preseason. He saw a lot of time with the first-team defense last week.

Now that I have addressed the position battles, here are my predictions. First off, Rudolph will be the backup quarterback but they will keep Dobbs. If they get the right offer, Dobbs will be shipped but it is still yet to be seen what kind of value they will get from him.

I believe Moncrief will start the season as the WR2 with Washington right behind him. However, Washington could easily take that spot if he plays as well as he has during the preseason. Johnson, Switzer, and Rogers will all make the roster behind them. At tight end, they will keep Grimble and Gentry behind McDonald but I won’t be surprised if they make a new acquisition at the position, sending Gentry to the practice squad.

On defense, I see Gilbert starting the season on the practice squad. as they go with the veteran Matakevich. This doesn’t mean that Gilbert won’t get called up at some point this season, as I believe that is a likely option. At outside linebacker, I think they keep five with Watt, Dupree, Barron, Adeniyi, Chickillo, and Skipper. Smith will start the season on the practice squad as he just hasn’t impressed as much this preseason.

Finally, I see Kelly winning the back up free safety spot as he can be moved all over the defense if needed to. I believe Marcus Allen will be on the practice squad and just an injury or a couple of poor performances away from being called up to the active roster.

Obviously, predictions might not mean much. However, this is what I believe is the best case for the Steelers to have the most competitive team possible. Regardless of what happens, I like our team this year and truly believe that we have an exciting season ahead of us.