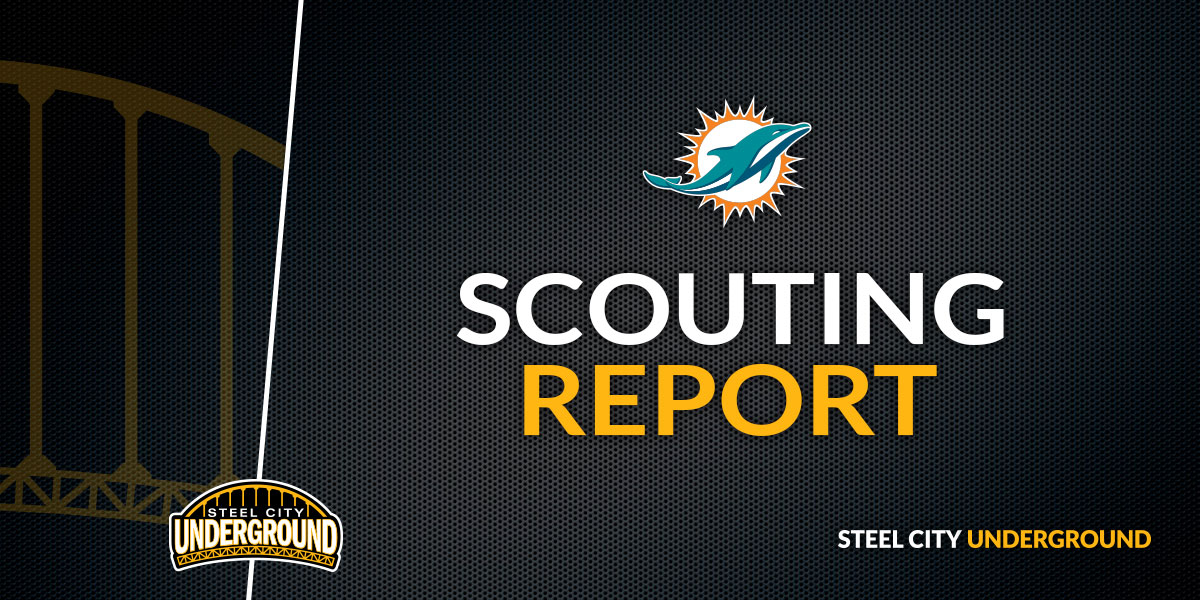 Pittsburgh Steelers Scouting Report: What to expect from the Miami Dolphins

After what has seemed like forever without some Pittsburgh Steelers football, fans finally have something to look forward to this week. The Steelers return home to Heinz Field for a Monday Night Football matchup with the winless  Miami Dolphins. Pittsburgh looks to stay hot after a huge win against the Chargers while the Dolphins will do just about anything to get something positive going for their disappointing season. With that in mind, let’s take a closer look at this week’s opponent, the Miami Dolphins.

The Miami Dolphins have several key injuries to monitor going into Monday night, especially on the defensive side of the ball. Miami has three starters in their secondary dealing with injuries in star corner Xavien Howard (Knee), free safety Reshad Jones (Chest), and strong safety Bobby McCain (Shoulder-AC Joint). Howard and McCain were able to practice on Friday and Jones were not, all three are listed as questionable. Defensive Ends Avery Moss (Ankle) and Trent Harris (Foot), along with defensive back Chris Lammons (Ankle) are also listed as questionable but were able to practice on Friday.

On offense, starting center Daniel Kilgore is listed as questionable with a knee injury. Kilgore did not practice on Friday.

Ryan Fitzpatrick looks to get his first win against Pittsburgh

As their record shows, the Dolphins haven’t been able to get anything done on either side of the ball this season. Their offense has been terrible so far, ranking 31st in total offense. Miami averages only 258.7 yards per game and 10.5 points per game so far.

After their draft-day trade for quarterback Josh Rosen didn’t work out as planned, the Dolphins have turned to veteran quarterback Ryan Fitzpatrick as their starter. Unfortunately, Fitzpatrick hasn’t been much of an improvement as he is 31st in the league in passing. He has thrown for only 717 yards, three touchdowns, and five interceptions this season. Their leading receiver is Preston Williams who has 23 receptions for 314 yards and only one touchdown. They also have DeVante Parker, who has struggled this season but is still a key threat in their offense. Another thing to keep in mind is that Fitzpatrick has struggled against the Steelers, as he is 0-6 in his career against them.

As bad as they have been throwing the ball, they haven’t been any better on the ground. The Dolphins rank 31st in the league in rushing offense, averaging only 66.7 rushing yards per game and scoring three total touchdowns on the ground. Their leading rusher is Kenyan Drake, who has only rushed for 174 total yards and has zero touchdowns this season.

While Miami has been terrible on offense, they have been just as bad on the defensive side of the ball. They currently rank 30th in the league in total defense, allowing 417.3 yards per game and 35.2 points per game this season. Miami has been especially bad against the run, ranking 31st in run defense. They have allowed 160.8 yards per game on the ground so far. They have a fairly young front seven this season. Their defensive line consists of John Jenkins and rookie Christian Wilkins at defensive ends with Davon Godchaux at nose tackle. At linebackers, they have Raekwon McMillan and Jerome Baker on the inside with Sam Eguavoen and Charles Harris on the outside.

Although they still haven’t been good, the Dolphins have been a little better against the pass. They rank 22nd in passing defense, allowing 256.5 yards per game through the air. They will likely get star corner Xavien Howard back who has been battling injuries this season, which will be huge as he will be covering a struggling JuJu Smith-Schuster. He is joined in the secondary by Eric Rowe at the other corner, along with Bobby McCain and Reshad Jones at the safeties. If Jones can’t go on Monday, Steven Parker will be his replacement.

As a Steelers fan, I’m not afraid to admit that winless teams make me a little nervous. The Dolphins will do anything to win at this point and no one wants to be the team to give them that first win. With that in mind, this game has a chance to be a lot closer than people may think. However, the talent of the Steelers will take over and take care of business this week. Running back James Conner is set for another huge game against a terrible Miami run defense. I see him going for over 100 yards and a pair of touchdowns. I also think this is a game where JuJu has a chance to get on track with Mason Rudolph coming back. I have the Steelers pulling away in the second half to win this one 38-21 to give them their third win of the season.