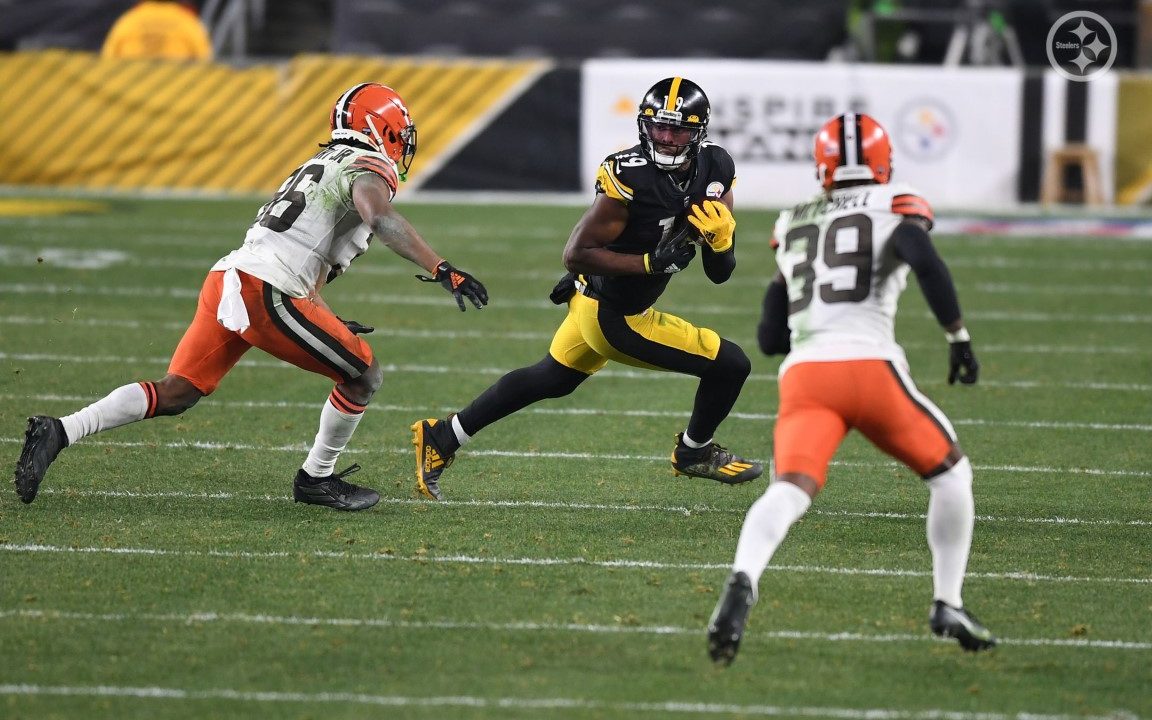 It is difficult to label any player a stud when the Steelers suffer one of their worst playoff losses in franchise history, losing 48 to 37 to the Cleveland Browns in Pittsburgh. But a few players did have good performances in the second half that sparked a comeback, and at least made the game competitive.

The Steelers’ offense started to click by the end of the 1st half and wide receiver Juju Smith-Schuster was a big reason why. He finished the game with 13 receptions for 157 yards, although some of that yardage came after the Browns had already put the game out of reach. He also made an impressive touchdown grab on 4th down late in the 3rd quarter that cut the Steelers’ deficit to a more manageable 12 points.

Fellow wide receiver Diontae Johnson had a similar game to JuJu’s. While he and Ben Roethlisberger did look out of sync at times, he made a lot of tough catches and plays in open space against the Browns. He caught 11 passes for 117 yards, and nearly caught a deep ball for a touchdown too, but, unfortunately, Ben Roethlisberger missed on the throw.

The Steelers’ defense as a whole had, by far, its worst performance of the season against the Browns, giving up 41 points. Cornerback Cam Sutton played well in place of Joe Haden, who could not suit up for the game and was one of the few bright spots on defense for the Steelers.

He made one of the best plays of the game for the Steelers’ defense on an impressive pass breakup against Jarvis Landry on 3rd down late in the 3rd quarter.

Another wide receiver, James Washington, had one of his best games of the season against the Browns. He was a reliable target for Roethlisberger, catching nearly every ball thrown in his direction, and ended the game with 5 catches for 72 yards.

Tight end Eric Ebron gets more of a borderline stud award for this game. He had a few inexcusable drops in the game and looked out of sync with Roethlisberger at times too. But he also created mismatch problems for the Browns’ defense that “Big Ben” was able to exploit. He caught 7 passes for 62 yards and made one of his best plays of the season on a 17-yard touchdown catch early in the 3rd quarter.

“Big Ben” had a bit of a puzzling performance against the Browns. While he set playoff game career highs in passing attempts and yardage, completing 47 of 68 attempts for 501 yards, and threw for 4 touchdowns, he also probably cost the Steelers the game.

His performance in the 1st half was poor, to say the least.

He could not throw the ball accurately or consistently, which kept the offense from moving the ball, and he threw 3 interceptions that caused the Steelers’ slow start to quickly snowball into a 28 point deficit in the 1st quarter. He also missed on a deep pass to Diontae Johnson that likely would have scored a touchdown and had a miscommunication with wide receiver Chase Claypool on a play that also likely would have resulted in a touchdown.

It was a tough game for Steelers fans to swallow, considering that it may have been the last game of his career.

The Steelers came into this game leading the league in sacks and quarterback pressures, and they did not record a quarterback pressure, hit, or sack at any point against the Browns. Cleveland managed to slow down T.J. Watt and hold him to one of his worst games of the season, though he did make a few plays against the running game.

Interior defensive linemen Cameron Heyward, Stephon Tuitt, and Tyson Alualu also failed to make an impact on the game, whatsoever, despite the Browns having two backup linemen on the field.

The Steelers’ pass rush was the best unit on the team in the 2020 season, and arguably the best defensive line in the league, so underperforming to that degree in a playoff game was certainly disappointing.

The Steelers’ linebackers, as a whole, did not play well against the Browns, but the Browns really exposed Robert Spillane in pass coverage. To be fair, he was forced to cover Jarvis Landry, a wide receiver, at times and you really cannot criticize him for failing in those situations. But he also struggled to cover the Browns’ tight ends all game.