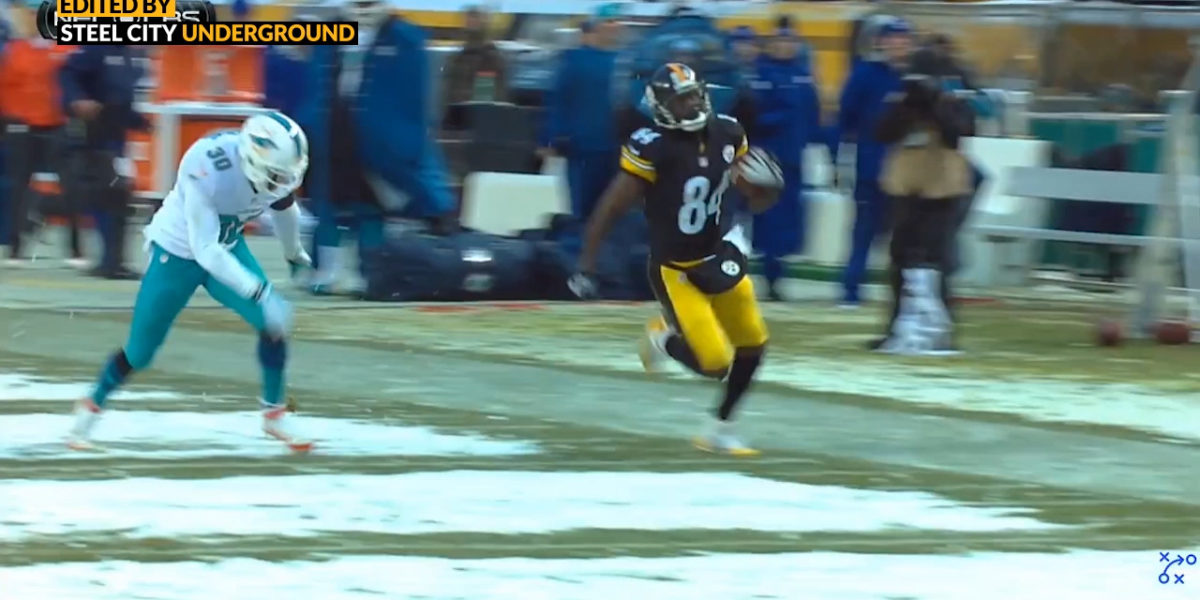 Back in 2013, the Pittsburgh Steelers had a rough start to their season and had to win multiple games late in the season to get in the playoffs. They were 5-7 and (basically) needed to win their final five games of the year to have a chance at the playoffs.

One of those games came against the Miami Dolphins in a snow-filled Heinz Field during Week 14. The Pittsburgh Steelers were down 34-28 with 1:03 remaining in the game and needed ‘Hail Mary’ to win: and keep their playoff hopes alive.

While we’re used to Ben Roethlisberger‘s comeback heroics, the start of this drive was as shaky as any could be.

First, Big Ben would take a sack. Then he would toss a short, ugly underhand pass to Le’Veon Bell, who would start from one sideline and dart down to the other, trying to make something happen but instead losing three yards and staying in-bounds as the clock continued to chew.

A similar play would happen next, as a ball was lateraled to Emmanuel Sanders via Bell, as Sanders was also brought down in-bounds at the Steelers own 21-yard line with 11 seconds to go: and the clock still running!

The Steelers needed one crazy play to get all the way down the field as the ball was snapped with one second left in the game and 79 yards to score.

Bell runs back for a second or two, then passes back to lineman Marcus Gilbert. Ben gets the ball, almost gets tackled, but gets it off to Antonio Brown on the Steelers’ 30-yard line. Brown runs down the sideline for 67 yards into the endzone and the Steelers were an extra point away from the walk-off touchdown being complete and the Steelers’ playoff hopes were still alive.

Actually, that’s not how any of this played out, unfortunately, as Brown was ruled out of bounds… Happy April Fools!

However, the Steelers would go on to win their last three games, beating the Cincinnati Bengals 30-20, the Green Bay Packers 38-31, and the Cleveland Browns 20-7 to finish the season at 8-8.

If you recall, it was a missed field goal by the Kansas City Chiefs backups which, if converted, would’ve sent the Steelers into the postseason. (Worse, the NFL admitted to an uncalled penalty which would have resulted in a second attempt!)

Instead of either play being huge for the Steelers, they sat from the outside looking in, narrowly missing the playoffs by the longest of odds.