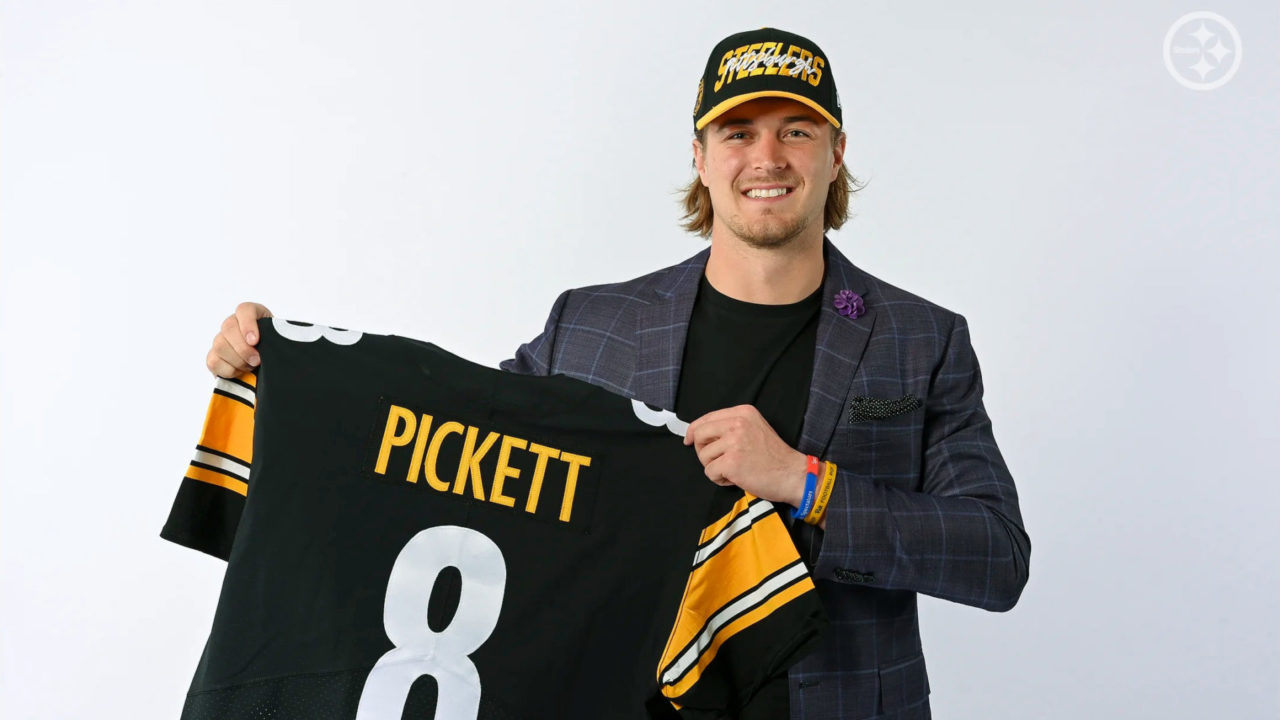 What do the Steelers rookie jersey numbers tell us about the players?

We had already known in advance that Kenny Pickett would resume wearing the same number eight that he donned while at the University of Pittsburgh. However, much of the other rookie class numbers were a mystery until now.

Now that we know who is wearing what, can we read much into a number?

Yes, we can! And I will in the following thoughts below. Enjoy!

Personally, I cannot believe they already gave out Josh Dobbs’ number five like that. (Big shoes to fill!)

You can’t go wrong with a single digit, they’re the coolest of cool numbers. I don’t know if it will be a practice squad exclusive, but it will be a cool jersey nonetheless for Oladokun.

If this guy gets cut and isn’t brought back to the practice squad, I bet someone else picks number five up though. I would love to see a non-quarterback and non-kicker/punter wear it, if not Oladokun.

I saw this coming a mile away. I mean, who didn’t?!

I’d love to brag more but this was obvious from the second Pickett was drafted by Pittsburgh with the 20th pick.

Number eight was previously taken by safety Karl Joseph… and he may not even make the team. (He probably will, but he’s definitely a fringe guy.)

Pickett wore eight his entire career at Pitt and it worked for him there, so I have no complaints with this one. “Like old school Kobe,” is what New York Giants QB Daniel Jones once said. (I hope Kenny’s better than that but the quote works!)

Alright. Here’s the thing: it’s beyond dumb that the Steelers don’t give out the number one because it’s “unofficially retired” for a former kicker, Gary Anderson. Oh, yeah, because he’s the Steelers all-time leading scorer.

If you’re a kicker on the same team for over ten years there’s a chance you too can be your team’s “all-time leading scorer.”

Secondly, I doubt Gary Anderson would give a hoot nowadays. The Steelers should have let Pickens wear number one and prosper, but I can dig fourteen.

Before you all say Limas Sweed or Sammie Coates (even though I’m sure most of you already did) the number 14 has had some glow up in recent years. DK Metcalf, Stefon Diggs, and Jarvis Landry (when he was with the Dolphins) all rock/rocked the crap out of 14!

I’m cautiously optimistic Pickens will follow suit. He may be the best 14 in the NFL before we know it, so there’s a plus. (But if the Steelers change their minds and give him number one? LET’S GO!)

This is weird. If Austin really wants to wear 19 then more power to him.

I’m not just speaking in terms of the love for JuJu Smith-Schuster, how just wore 19 either: but it feels cheap and recycled. Like the Steelers didn’t give Austin (or Pickens really) much of a choice because quite frankly, there aren’t a whole lot of receiver numbers open if they aren’t going to dish out the single digits.

The thing is they let Melvin Ingram wear 8 last year before he forced his way out of town, so I don’t get the hang-up over Pickens or Austin wearing their college numbers, 1 and 4. Both could be theirs.

I’ll say it again: if Austin really wants to wear 19 and this was his choice, I’m all in. But it just feels off.

19 has been made most popular by guys like JuJu, Adam Theilen, Keyshawn Johnson, Eddie Royal (for a brief stint) and Lance Alworth (for you old heads.) It’s not like it hasn’t been done before, but 19 is a bit unconventional.

I tend to think he may potentially switch to number four before Week 1 of the regular season, but we’ll see!

Yeah I know, HEEEEAAAAAAAATTHHH… but Cobi Hamilton wore it and it’s been dished around in the preseason since Heath Miller‘s retirement. The Steelers clearly aren’t too bent out of shape over that. They can’t unofficially retire every number. (And Heath’s a great guy so I doubt he’s offended, of all people.)

I really think Connor Heyward is going to be better than most people think. Expectations are low but I’ll take easy money always. Also, wearing 83 may signify the Steelers plans for Heyward to lean more to the tight end side, rather than the full back side. (Just something to pay attention to.)

Connor has great hands and above-average route running ability for a player of his stature and build, so I’m down for him to be the team’s TE3/4.

Not much to offer here from me, because the 50’s and 20’s are the worst to pick from every year for the new Steelers.

I swear there’s never any good 50’s or 20’s available. 50’s largely because a good chunk are unofficially retired. And the 20’s just always seem to be taken up by current players.

I know Robinson wasn’t looking for a 20, but he probably would have liked to pick something lower than 93. I mean Joe Schobert wore it last year, so it technically is a linebacker number, but I’m more used to seeing it on the defensive line.

This slaps. A big man number for a big man.

Similar to Mark Robinson mentioned above, I doubt Leal had much of a choice, because like the 20s and 50s, there were zero 90’s open except for 93 and 98.

But 98 works on Leal. I can see him in that on the edge or on the defensive line, wherever the Steelers want to put him. (Which we still don’t know where that will be yet.)