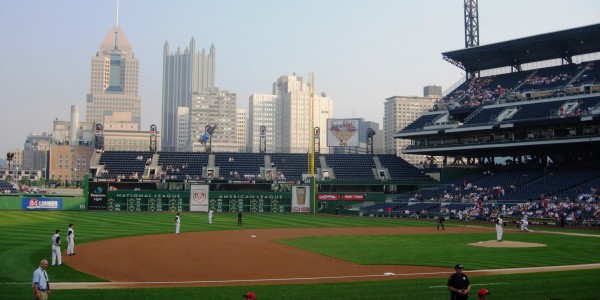 Steel City Underground presents an ever-growing list of things to do in Pittsburgh, Pennsylvania! The Steel City is full of attractions such as world-class museums, sports and entertainment. Please keep in mind, our list is not all-inclusive! If you know of a place left off of our list, feel free to send us a recommendation.

Home of Major League Baseball’s Pittsburgh Pirates, PNC Park was rated the top stadium in the league by a recent ESPN poll. The ballpark features a great skyline view of downtown Pittsburgh from nearly every seat in the house. A number of restaurants and bars surround the park, along with numerous tailgating options. The famous Roberto Clemente bridge also serves as a gateway into the park, as it’s shutdown to vehicle traffic to be used as a pedestrian walkway on game days.

Experience four floors of interactive exhibits. See an Omnimax movie on the BIGGEST screen in Pittsburgh! Explore the galaxy without ever leaving the North Shore at the Buhl Planetarium. Watch hair-raising live shows and discover an array of programs for the whole family!

Heinz Hall for the Performing Arts, dedicated in 1971 and renovated in 1995, is the cornerstone of the Cultural District of Pittsburgh. This cultural-entertainment focal point of the Golden Triangle has helped spur the continuing economic and cultural revitalization of downtown Pittsburgh. With its international reputation for grandeur and excellence as a concert hall and showplace, the 2,661-seat Heinz Hall is home of the Pittsburgh Symphony Orchestra. The Hall is centrally located near Gateway Center, PPG Place, CNG Tower, Fifth Avenue Place and Liberty Center. The Cultural District offers many restaurants, hotels and parking facilities within easy walking distance to the Hall.

Atop Mount Washington you can view the beautiful Pittsburgh skyline, and take in some of the best dining in the entire city. Mount Washington boasts several highly rated restaurants such as, but not limited to, Monterey Bay Fish Grotto, Le Mont, and Tin Angel. Don’t forget to travel in style along one of Pittsburgh’s inclines! The unique transportation rails diagonally scale the mountain from it’s base to the top, much like trolley affixed to a roller coaster. The view has to be seen to be believed!

Phipps Conservatory and Botanical Gardens, a great steel and glass Victorian greenhouse, has been inviting visitors to explore the beauty and mysteries of plants since 1893. Set amidst one of Pittsburgh’s largest greenspaces, Schenley Park, Phipps Conservatory stands as a cultural and architectural centerpiece of the city’s Oakland neighborhood.

A scenic neighborhood in it’s own right, the Strip District features food and shopping. Among the featured places to eat include Wholey’s Fish Market (featuring fresh fried seafood and Andy’s sushi) and the original Primanti Bros. restaurant. Various shops offer everything from sports memorabilia to specialty groceries and baked goods.

Constructed in 1900 to house the Pittsburgh Terminal Train Station, this dining and entertainment destination celebrates its rich cultural and industrial history by renovating and maintaining its attributes like the Landmarks Building, which is home to Pittsburgh iconic restaurants The Grand Concourse and The Gandy Dancer.

Once a train shed, The Freight House Shops houses over 20 unique retailers, from Pittsburgh souvenirs to novelties from around the world including toys, fashions, jewelry and cigars.

At the heart of Station Square is Bessemer Court, which was designed to commemorate the city’s celebrated steel history. Here, you can find Hard Rock Café and the state-of-the-art Fountain at Bessemer Court with its Waltzing Waters Liquid Fireworks Show of hundreds of multi-colored water jets all choreographed to music and soaring up to 40 feet in the air.

A National Historic Landmark, this state park is at the intersection of Pittsburgh’s three rivers, and offers a variety of photo opportunities overlooking the city and it’s other landmarks.

Also located in the park is the Fort Pitt Museum, which details history from early-French explorations to the beginning of Pittsburgh’s industrial age.

This 77-acre facility features fun for the entire family, with tigers, lions and polar bears in the same location. The most unique attraction are two underwater tunnels where you can view polar bears, sharks and other sea life swim around you.

Kennywood is one of the oldest and most beloved amusement parks in America. Founded in 1898, it has thrilled and delighted both young and young-at-heart visitors for more than 110 years. From the early days of the carousel, through the development of the first roller coasters, to the technological advancements in today’s steel looping coasters, Kennywood has always been the park that puts a smile on everyone’s face. Designated a National Historic Landmark since 1987, you’ll find “Lost Kennywood,” a replica of turn-of-the-century architecture that houses some of the park’s most popular rides, as well as attractions that go from mild to wild throughout the park. Refuel at more than a dozen dining areas offering tasty treats that can’t be found at any other amusement park anywhere. Kennywood is a unique experience and remains one of “America’s Finest Traditional Amusement Parks.” In fact, it’s what memories are made of!

The Andy Warhol Museum is a vital forum in which diverse audiences of artists, scholars, and the general public are galvanized through creative interaction with the art and life of Andy Warhol. The Warhol is ever-changing, constantly redefining itself in relationship to contemporary life using its unique collections and dynamic interactive programming as tools.

Open 24 hours a day, seven days a week. Rivers Casino is located next to Heinz Field on the North Shore. The casino features 100 table games, over 2,900 state-of-the art slots and a 30 table poker room, as well as eight award winning restaurants and bars.