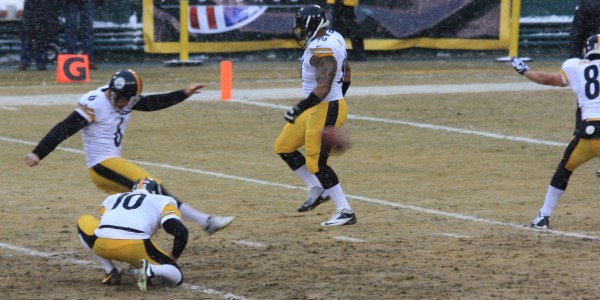 State of the Steelers: Specialists

Make no doubt about it: special teams can make or break a team. Several games in the 2013 season came down to critical plays on special teams, such as the annihilation of the Cincinnati Bengals at home, or the famous “assist” by Mike Tomlin on a Jacoby Jones punt return, it’s critical the Steelers hit on all cylinders with their specialists.

Today we take a look at the kicking and punting game, and where the Steelers look to improve in 2014.

Shaun Suisham – Few players have been as durable, or consistent, as Suisham. Since joining the Steelers in November of 2010, Shaun has played in every game. His field goal percentage over two full seasons is 90% and 93% in 2012 and 2013 respectively; even better numbers for someone playing in, arguably, the toughest kicking stadium in the NFL.

However, even a kicker can make or break a team. Last season, Suisham was named AFC special teams player of the week after his perfect outing against the Baltimore Ravens. Suisham hit all four of his field goal attempts, including a game-winning 42-yarder as time expired: the Steelers won 19-16.

The game also marked a 14-of-14 start for Suisham’s season. Unfortunately, one week later against the Oakland Raiders, Suisham not only missed one, but two field goal attempts, as the Steelers lost 21-18. (Either 3 point attempt would have at least left a tie at the end of regulation and forced overtime.)

Regardless, few can argue that Suisham has been a bright spot for the team. Here are Suisham’s final numbers for 2013, including a perfect record from the 40+ range:

Punting was an Achilles heel for the Steelers during the 2013 season. Coming into the preseason, Pittsburgh brought Brian Moorman into camp to compete with incumbent Drew Butler, who himself had previously won his job from previous incumbent Jeremy Kapinos in 2012.

Butler would once again make the 53 man roster, beating out Moorman for the job. However, Butler would lose his job before the regular season, when the Steelers signed Zoltan Mesko. Mesko was discarded by the New England Patriots following their final roster moves.

Zoltan Mesko was not the answer for the Steelers punting woes either. In seven starts, Mesko only dropped 3 punts within the 20 yard line. This gave opposing offenses an advantage with good starting field position, which handicapped the Steeler defense. The punter was released on October 29th following the Raiders game, where he only saw 1 of 7 punts land within the 20.

Mesko’s release made room for Mat McBriar, previously of the Dallas Cowboys, with whom he holds franchise records for net average (38.1), gross average (45.3) and punts inside the 20-yard line (175). McBriar was an upgrade, dropping more punts into the 20, in turn, helping the defense.

Between Mesko and McBriar, here are the final punting statistics for the 2013 season:

The Steelers enter their 2014 camp with two punters on the roster: Brad Wing and Adam Podlesh. Undrafted in 2013, Wing was signed by the Eagles to provide competition in their 2013 training camp. He was released by the Eagles prior to the conclusion of the 2013 preseason.

Podlesh on the other hand, is a seasoned NFL veteran, having played 7 seasons in the league. Unfortunately, 2013 was not a good year for Adam, who ranked 33rd in the NFL with 40.6 gross average punting yards. He was released by the Bears earlier this year. (The Bears also fielded the worst punting unit in the NFL.) Podlesh’s 2013 numbers:

Despite the off year, Podlesh shows promise with 27 punts inside the 20 (compared with 16 total combined by Mesko/McBriar.) Also, do not let averages fool you: seldom are they a “tell all” statistic, as punters may drop short punts to pin an opponent deep within their own territory. Podlesh’s lower average and higher total of punts within the 20 suggests precisely that. His 39.7 percentage in the 20 in 2013 were among the highest of his career, also dwarfing McBriar’s 32.5 and Mesko’s lowly 8.8 percentages. Barring any setbacks, Podlesh should hold off Wing to win a spot on the roster.

Verdict: Securing a solid kicker in Shaun Suisham, and the potential upside of Adam Podlesh, the Steelers will improve their kicking and punting game in 2014.

Stay tuned for more “State of the Steelers” articles in the weeks leading up to the regular season.