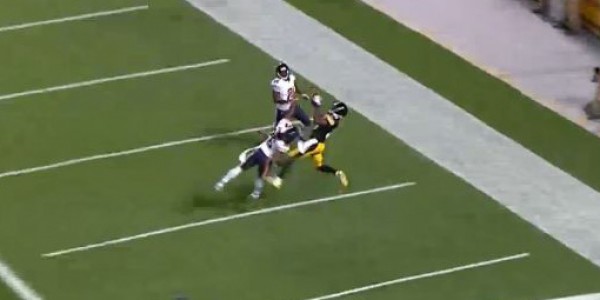 5 Videos NFL Total Access Could Use To Showcase The Steelers

I should give up watching NFL Total Access. Maybe I love my Black & Gold so much, maybe I’m biased, but it appears the program has difficulty in showing anything but Pittsburgh Steelers “low lights” instead of highlights.

Knowing Warren Sapp was the correspondent sent to St. Vincent, the writing should’ve been on the wall to avoid this segment at all costs. Afterall, this is the same player who routinely called the Steelers defense “old and slow” among other jabs he takes at the team from time to time.

However, as a die-hard fan, I’m attracted to all things Steelers, which once again set me up for disappointment. During the multiple headline segment, clips were shown of Ben Roethlisberger taking hits, and the Steelers defense giving up big plays. Two of those plays, Terrell Pryor’s opening play 93 yard touchdown run, and Andy Dalton’s touchdown connection with Marvin Jones in the endzone, were shown twice.

It’s as if the video editors for NFL Total Access ran out of plays that related to the Steelers. That’s why it gives me great pleasure to display several positive highlights from the 2013 season. Maybe the editors will take notice and slide a few of these into their next Steelers composite film reel:

Brown snags this ball out of the air and lands in-bounds for six points.

Troy being Troy. Polamalu intercepts a Ryan Tannehill pass, then takes it to the house.

Ultimately, Garvin gets fined for this block during a punt return against the Bengals.

Will Gay & Will Allen Sack Fumble, and Touchdowns

Jason Campbell had a long day at the office, first throwing a pick six to Gay, then getting sacked by Gay and fumbling to Allen, who also went in for a score.

We had a hard time finding this video, despite the hype made over a Haden vs. Brown matchup last November. Spoiler alert: Brown smokes Haden for this 41 yard touchdown.

(Actually, this entire video could supplant what NFL Total Access ran, as Brown has become a human highlight reel in recent years.)

There you have it. Multiple highlights showcasing the Steelers talent, instead of pointing out their shortcomings. Maybe NFL Total Access can use 1 or 2 of these in place of showing the outplayed Pryor run over and over!