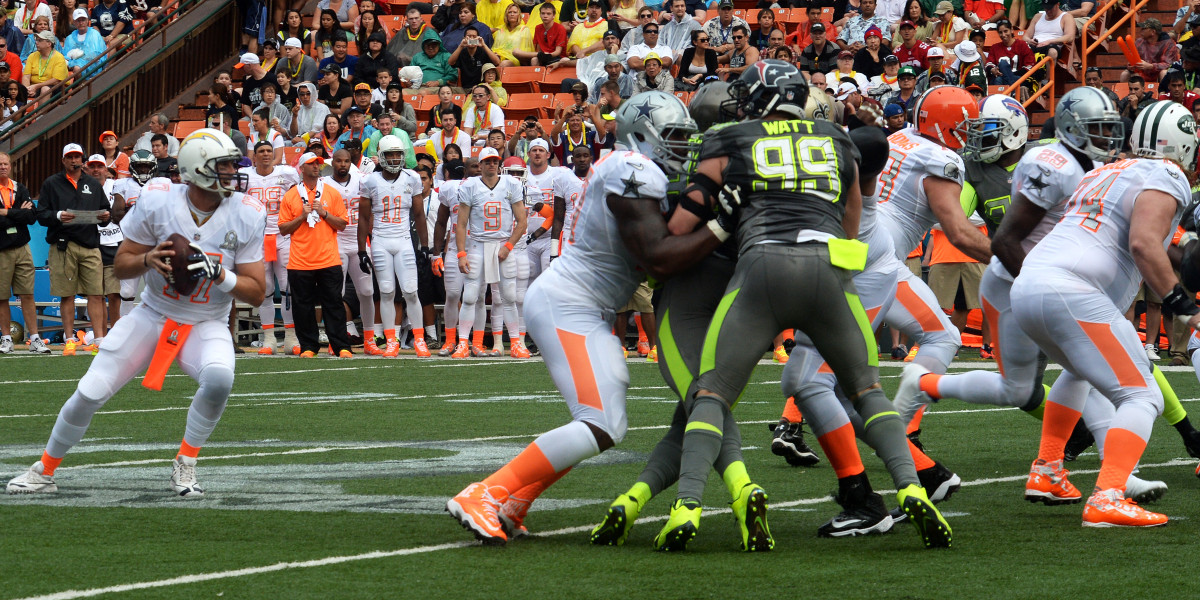 The Pro Bowl has always been a laughing stock of the NFL. Despite the best efforts of Commissioner Roger Goodell to “spice up” the game with a fantasy football style draft, the game continues to make a mockery of what is supposed to be the league’s best.

Don’t get me wrong; I believe the league should have an All-Star selection, and a corresponding game. The problem I have with the Pro Bowl is the way the game is showcased.

A total of 86 players were selected for this year’s Pro Bowl: 42 on offense, 36 on defense and 8 on special teams. Of those 86, 22 players (roughly 25.5%) have been replaced. 9 of the players replaced are Super Bowl participants, while a few more (such as Le’Veon Bell and Peyton Manning) finished the year with injuries that the owners of their contracts would probably prefer not play in a meaningless game.

Here is the full list of replacements for Sunday’s game (information courtesy of ESPN.)

With no disrespect to those selected or selected as replacements, it does bring into question whether the “best” are playing in the Pro Bowl. For example, 6 QBs represent 18% of the teams (6 of 32, not including those teams who started more than 1 QB.) However, with half of those quarterbacks replaced, there are now 9 players at the position representing the “best.” Nine QBs comes out to nearly 1/3 of the league (28% or 9 of 32 member clubs.)

The biggest black eye is at the WR position, where 8 players are chosen, yet 5 replacements have already been made!

As for the format, I have no issue with the current team captain and choosing teams “sandlot” style. In fact, it adds a bit of interest for the game, and gives the NFL more original programming for their network (which is good for business.)

Another problem was moving it up 2 weeks, from after the Super Bowl, to the weekend before. This eliminated the participation of the players playing in the Super Bowl. Of course, if the game was left to be played after the Super Bowl, the argument is that interest wanes, plus many of the Pro Bowl participants haven’t played in a game for over a month (especially if their team did not make the postseason.)

I get it: Hawaii is a vacation for the players and an incentive for them making and playing in, the Pro Bowl. But how many fans travel to the game? The stands are mostly empty and there’s no enthusiasm from those who do show up.

With all of that said, how do we fix go about fixing the Pro Bowl?

Move the Pro Bowl to the beginning of the season… Okay, I know the outcry of “well this guy could get hurt.” That could still happen with the current setup of the game, however, when playing at the end of the season, isn’t there more risk of injury with players who are recovering from 16 games? And it’s not as though they’re playing “full go” and trying for hard hits as in the regular season anyway.

Moving the game up to the first game of the year won’t harm it’s reputation either, as the participants aren’t playing more than a quarter or at most, a half, in the similarly meaningless preseason games. In my opinion, it would be a fun way to open the season.

But what about the Hall of Fame Game, played during the Hall of Fame weekend in Canton, OH? I say do away with it. The game is so early in the year that the quality of football is mediocre. Besides, the participating clubs don’t want to play a 5th preseason game anyway.

Also fans don’t care about the random teams playing in Canton. Heck, season ticket holders don’t even show up for their team’s preseason home games. It’s not likely that Seahawk or Dolphins fans are going to show up in Ohio for a meaningless game, billed “Hall of Fame” game or not. (The only scenario where this works out is when one or both of the teams playing have a representative entering the Hall, but attendance is still nonetheless lacking.)

By moving the Pro Bowl to Canton, it places the game’s current stars with those of the past: it’s a win-win situation for the fans and the league. In my opinion, that’s the most logical situation, but what if the league still wants a Hall of Fame Game and the Pro Bowl?

I would think the Pro Bowl could be a nice display to test markets where the NFL is always rumored to have one of it’s franchises relocate to. The game could be played in viable markets such as Los Angeles or San Antonio. It could be moved with other vacation destinations, such as Las Vegas or Orlando, and of course, rotated in with the traditional Hawaii visit.

The Pro Bowl could also be used to expand the NFL’s international focus, hosting the game in places such as London, Toronto or Mexico City. Again, the star power surrounding the contest would bring a considerable media presence.

While all of the above are viable options for moving the time and location of the game, it opens up it’s own problems.

While some may disagree and say Hawaii is an expensive trip, it is no more expensive than what has become the corporatization of the Super Bowl. Also, a Hawaii hosted Super Bowl alleviates worries of playing in cold weather climates: the obstacles would be no different than playing the game in a non-dome stadium, such as Miami.

The second issue is what do between the week of the conference championships and the Super Bowl, which was one reason for moving the Pro Bowl up into the week leading into the big game. While this solution isn’t as simple, the NFL doesn’t suffer from a lack of interest in the Super Bowl, rather, just a game on the schedule with a week off.

While it involves a lot of hurdles and the willingness of the players and owners, a 3rd place game could be played between the losers of the 2 conference championship games, in much the same way that FIFA’s World Cup crown a 3rd place “winner” or the Olympians vie for a bronze medal. While 3rd place bragging right seem dull, the league could dangle a carrot by having draft position as the stakes, with the winning team leaping a pick ahead of the 3rd place loser.

Another option for a game could be a larger spotlight on the Senior Bowl, which is already largely covered by the NFL and it’s media properties, such as NFL Network (which airs the game this Saturday.) The game is a look into future NFL prospects and could tie-in well known players, ie. Pro Bowlers!

And if a game isn’t up to the NFL’s speed, they could go without one and make a return to the skills competitions which were held during the Pro Bowl weekend up until 2007. Who wouldn’t want to see top QB’s duke it out in accuracy contests or find out who has the fastest 40 yard dash?

Regardless of which changes make the best business sense, the NFL must once again adapt or the Pro Bowl may be in danger of going the way of the dodo bird.